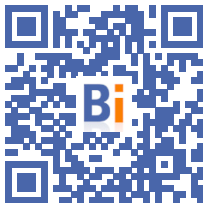 The current health crisis has made digital technology essential to our daily lives more than ever and has exacerbated the need for digital access for all. The Government is mobilizing to make access to infrastructures and digital uses a real public policy deployed throughout the territory.

Ensure a good internet connection for everyone, everywhere in France

The recovery plan reinforces this dynamic and allows a total mobilization of 908 million euros:

The generalization of optical fiber to the subscriber and 4G for all French people is the essential foundation for bridging digital divides. Moreover, it is increasingly becoming a sine qua non for the attractiveness of regions. It is for this reason that the Government has set ambitious objectives for the deployment of very high speed broadband for all and aims for general optical fiber coverage of the territory by 2025.

This ambition complements and reinforces the two initial objectives of the Very High Speed ​​France Plan, which provided for guaranteeing everyone access to good broadband (greater than 8 Mbits / s) by 2020 and access to very high speed (higher at 30 Mbps) by 2022.

The momentum initiated by all the players in the France THD plan is an undeniable success: to date, more than half of French premises, i.e. 22 million households and businesses, are served by an optical fiber network, and two-thirds premises can access a very high speed wired network (all technologies combined).

With more than 5 million new premises made eligible in 2020 for fiber optic internet access, France stands out for its dynamism compared to its neighbors and is at the top of recent European rankings in terms of FttH deployments and progression of new subscriptions. 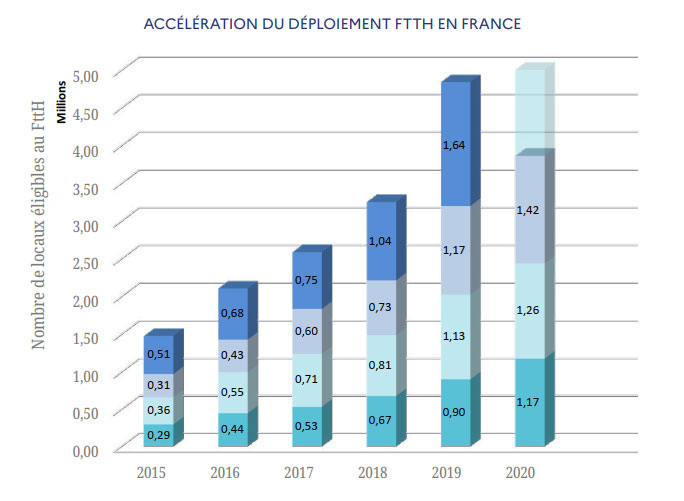 Under the France Very High Speed ​​Plan, state support now amounts to 3,57 billion euros. The Government is considerably strengthening the budgetary resources mobilized in order to increase support for public initiative networks carried by local authorities in the most rural areas. Thus, in addition to the 300 million euros redeployed in favor of the coverage of the territory with optical fiber as well as the 30 million euros voted in the 2020 amending finance law, the Government has decided to give a boost to the framework of France Relance by granting an additional 240 million euros for the generalization of fiber by 2025. 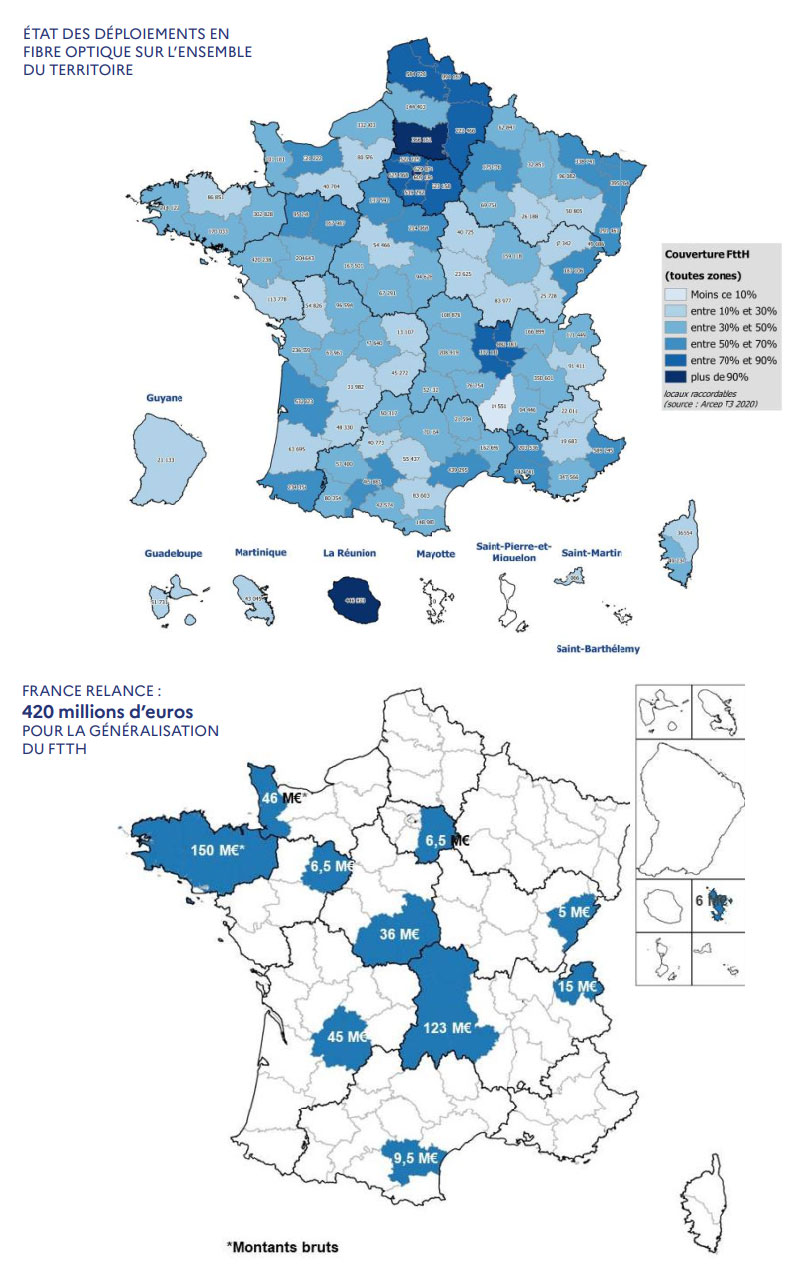 In parallel with the deployment of optical fiber and in order to generalize quality mobile coverage, the "New Deal Mobile" is part of this essential public policy to bring digital technology closer to the daily lives of French people. As such, Cédric O, Secretary of State for Digital Transition and Electronic Communications, signed in mid-December 2020 two new ministerial decrees defining 593 new sites, so far not or poorly covered in mobile telephony, for which operators Bouygues Telecom, Free Mobile, Orange and SFR must provide 4G coverage within 24 months at the latest.

These new sites to be covered as a priority have been identified and prioritized by the territories within the framework of an ongoing collaborative work between the local authorities and the State.

2 sites are now benefiting from or will benefit from improved mobile coverage under the New Deal Mobile. 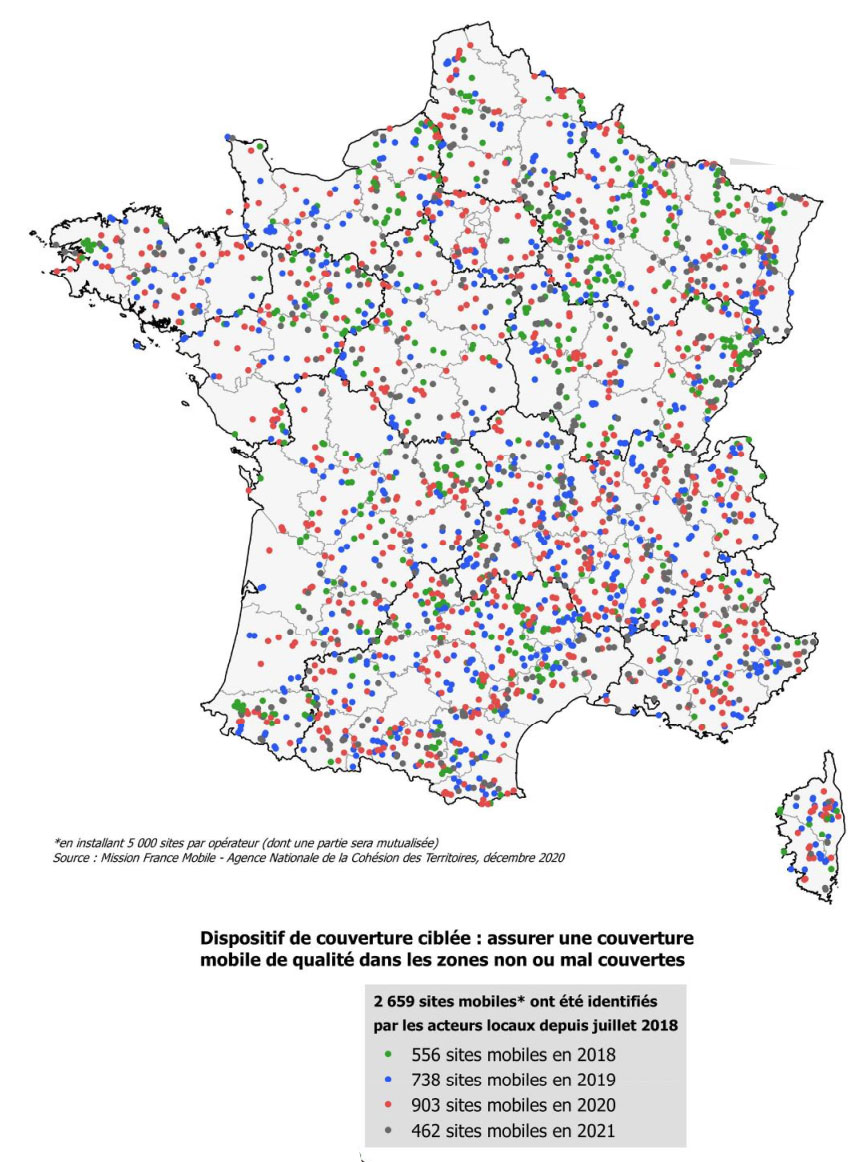 Reminder of the New Deal Mobile

In January 2018, the State and the mobile telephone operators (Bouygues Telecom, Free, Orange and SFR) reached a historic agreement - “the New Deal Mobile” - aimed at generalizing quality mobile coverage for all French people. The Government has made the choice within the framework of the New Mobile Deal to prioritize the objective of land use planning rather than a financial criterion for the allocation of frequencies.

This New Mobile Deal is based on five main commitments from operators: