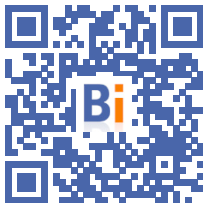 If the difficulties of the construction sector during the pandemic could presage a halt in the renovation of housing, the year 2020 was, on the contrary, marked by a gradual acceleration of activity.

This positive dynamic continued in early 2021, testifying to the growing interest of the French in improving the energy performance of their homes. Consequence of the launch of MaPrimeRénov 'and of the general strengthening of aid to finance works? Environmental awareness or simple economic constraint? Understanding the green value of real estate or anticipating new renovation obligations for landlords?

PrimesEnergie.fr, one of the main CEE * delegatees supporting individuals in carrying out and financing their work, analyzed more than 210.000 projects that it financed in 2020 and in the first quarter of 2021 via the energy bonus system. Overview of the main lessons. 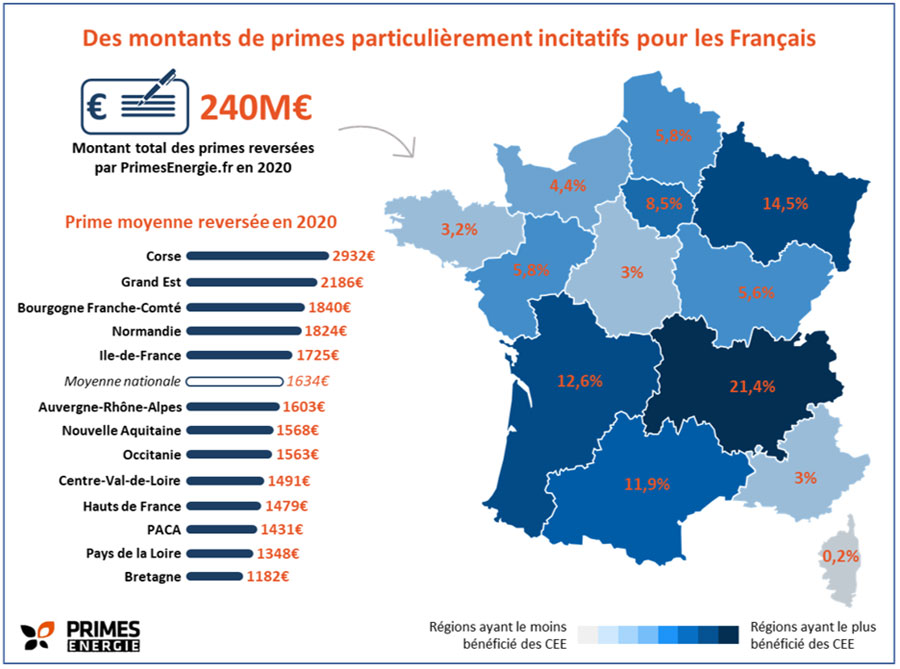 A record level of aid to households

It has been widely mentioned, the health crisis and the successive confinements have enabled the French to become more aware of the need for energy renovation work in their homes and this can be seen in the figures. The number of projects financed by PrimesEnergie.fr: 146.845 renovations in 2020, represents one project financed approximately every 3 minutes throughout the territory.

“If we put aside a few weeks during which the sector's activity was stopped by the health crisis, we have never financed as much work as since the beginning of 2020. Thermal comfort, valuation of a real estate assets, environmental awareness exacerbated by the crisis or the desire to save money ... There was no lack of reasons to act for households who spent much more time at home, between confinement and teleworking, sometimes bringing projects to fruition for a long time.

The overhaul of financing aid with MaPrimeRénov 'on the one hand, and energy bonuses on the other, has undoubtedly improved the readability of systems that often remain unrecognized. For 2021, the trend remains strong with, and this is a major change in government policy, the passage in recent months from an incentive phase to a new mandatory phase in terms of energy renovation. With the exclusion of the most energy-consuming homes from the rental stock from 2023, it is a paradigm shift that will directly impact many owners in the years to come ”, analysis Nicolas Moulin, founder of PrimesEnergie.fr

An explosion in the pace of renovations 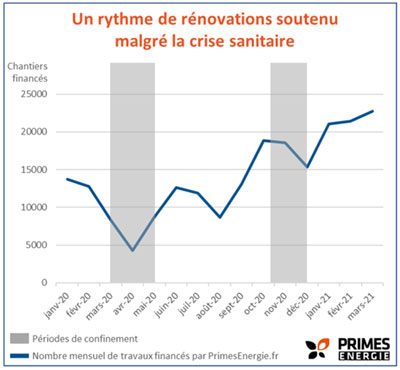 After a shock phase during the implementation of the first confinement in mid-March 2020, the pace of renovations gradually resumed its forward motion after a short summer break, the second confinement, which entered into force on October 30, 2020, having had also a lower impact thanks to the health protocols in place. While the drop in the number of renovations carried out at the end of 2020 was contained, the recovery in early 2021 exploded to reach a level not seen since 2010.

A MaPrimeRénov 'effect on works favored by the French 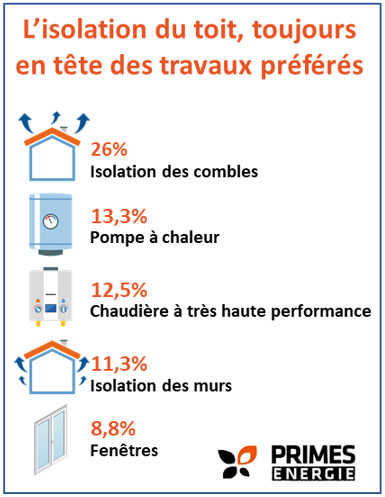 For an efficient energy renovation, it is necessary to improve the building envelope in time 1, then to replace the heating system. These tips, fairly well anchored in the minds of households, are found in the main work stations carried out in 2020. Roof insulation, which alone accounts for 30% of heat loss in homes, represents more than a quarter of projects financed in 2020 (26%). Next come heat pumps (13,3%), very high performance boilers (12,5%), followed by wall insulation (11,3%). Window replacement, although less energy efficient, nevertheless represented 9% of premiums paid over the year.

However, this general stability hides some changes directly linked to the implementation of MaPrimeRénov 'at the start of 2020. Roof insulation, which was excluded from the MaPrimeRénov' system, recorded a sharp drop in 2020 when it represented 36% of construction sites in 2019. Conversely, heat pumps, which are among the work best reimbursed by MaPrimeRénov ', recorded a substantial increase since they represented only 10,6% of construction sites in 2019. This impact of MaPrimeRénov This is spectacular for wood heating systems, which are also particularly well subsidized: the number of projects financed by PrimesEnergie.fr has increased by + 40% over the year 2020 compared to 2019.

End of the insulation of the attic at 1 €, stop of the "Coup de Pouce" allowing the replacement of an old gas boiler by a newer one as well as that allowing the installation of an efficient electric heater ... from the July 1, 2021, the energy bonus system is changing.

While these changes may have been seen as a blow to the device, it is actually an evolution that goes in the direction of the history of the energy renovation of housing, with a double objective: to reduce the effects windfall for unscrupulous craftsmen, and guide the French towards comprehensive and more efficient housing renovations. Until 2025, 5 billion euros will be mobilized each year via the Energy Saving Certificates scheme, which can be fully combined with MaPrimeRénov for households.

As part of these comprehensive home renovations, one of the challenges over the next few years will be to support households in the choice of their work, by carrying out energy audits. These will make it possible to clearly identify the priorities and thus optimize the overall housing renovation program.