Driven by construction, the creation of jobs in the craft industry stood up well to the health crisis in 2020 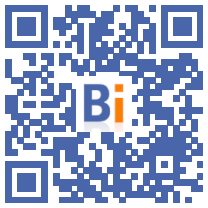 While the national craft week is currently being held, the Higher Institute of Trades (ISM) and the MAAF unveil the 2021 edition of the craft barometer which assesses the impact of the health crisis on jobs employees and self-employed.

If a collapse of employment was to be feared in many sectors, it seems that the craft industry has limited the breakage. In 2020, salaried jobs thus held up better in the craft industry (+ 1,7% compared to 2019) than in the private sector as a whole (-2%). A positive trend observed throughout the territory. There was also a good surprise for the self-employed: the year was marked by a very slight increase in registrations (+ 1% compared to 2019) despite the drop in activity of micro-entrepreneurs.

Salaried employment: it was maintained throughout the territory despite the crisis

In 2020, despite the impact of the health crisis and the resulting economic crisis, salaried employment resisted much better in the craft industry (+ 1,7% compared to 2019, or 28.000 jobs created) than in the whole of the private sector, where the workforce fell by 2% (-311.000). 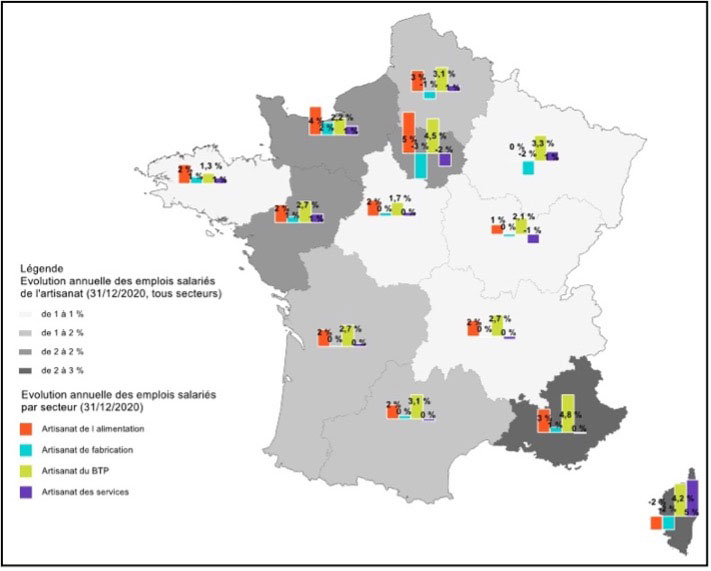 All the regions recorded a slight growth in salaried jobs, but the dynamic was weaker in the regions of central-eastern France. It is in Corsica and Provence-Alpes-Côte d'Azur that we observe the largest increases (+ 3%). Job creation was less strong in Grand-Est, Bourgogne-Franche-Comté, Auvergne-Rhône-Alpes, Brittany and Center-Val de Loire (+ 1%), but the balance remains positive.

Marielle Vo-Van Liger, Marketing and Communication Director MAAF: “Despite the crisis that hit it hard, and which could raise fears of a collapse in employment, the craft sector has proven its great capacity for resistance and resilience. While some activities were more penalized than others, such as hairdressing and beauty treatments, due to the multiple periods of confinement which did not have the same repercussions depending on the sector, the craft industry has managed to maintain its salaried jobs in all regions, even those most affected by the crisis. "

This growth is explained by the increase in demand for renovation work and consumption at home and by the return to local circuits. The workforce is stable in the service crafts and manufacturing.

Craft companies reduced their hiring by 8% in 2020. A drop that can be attributed to the poor results of the 2nd quarter of 2020, a period during which France was very strictly confined. At that time, craft businesses reduced their hiring by 32% compared to 2019. A decline observed in all sectors: food (-44%), services (-35%), manufacturing (-34%) and construction (-23%).

The resumption of recruitments in the 3rd and 4th quarters is driven by the construction industry, with recruitments up 9% compared to the same quarters of the previous year.

In other sectors, there are slight declines which can be explained by a drop in activity, by the greater prudence of companies but also by the reduced mobility of employees (they were probably less numerous to change companies, there were therefore fewer replacements to be filled). Only the food sector suffered a significant drop in hiring in the last quarter of 2020 (-18%, especially short fixed-term contracts).

Catherine Élie, Director of studies at ISM: “The overall drop in hiring in the craft industry in 2020 was strongly influenced by the sudden slowdown in recruitments in most sectors of activity in the 2nd quarter, in the context of the first confinement which put the country under cover. and the economy on pause. This decrease must therefore be put into perspective. When we look at the year as a whole, we see that the recruitment dynamic has held up rather well compared to 2019, once again attesting to the good resistance of the craft sector to the crisis, thanks in particular to the support mechanisms put in place. " 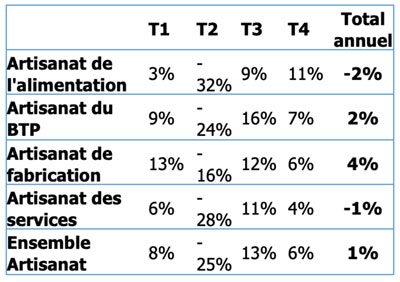 Pleasant surprise: the economic uncertainty caused by the health crisis did not slow down the entrepreneurial dynamic in 2020. Registrations thus saw a slight increase of 1% over the year as a whole.

Once again, it is the 2nd quarter of 2020 that is the exception: during this period, there was a 25% drop in registrations.

Over the year as a whole, the increase in registrations mainly concerns manufacturing crafts (+ 4%) and construction (+ 2%). The slight decline in registrations observed in the food sector (-2%) can be explained by a drop in transmission-take-back operations, linked to the context of uncertainty.

A drop in activity among micro-entrepreneurs

Less covered by aid mechanisms, micro-entrepreneurs in the craft industry have been severely affected by the crisis. This is all the more so as the declared turnover shows an average decrease of 12% of their turnover, in particular in the activities of taxis-VTC (-57%) and hairdressing / aesthetics (-32%) .

FOCUS: Income of self-employed workers: those of micro-entrepreneurs are two to six times lower

Micro-entrepreneurs stand out from other self-employed workers by the level of their income, which is much lower.

The difference is greatest in the activities of manufacturing crafts: in 2018, the average annual income (charges paid) was € 3 compared to € 871 for a self-employed person on the traditional scheme.

* 2019 data not yet available for self-employed workers