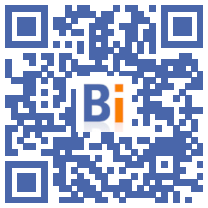 On June 25, the SNFA General Assembly was held in the form of an interactive TV set split into two highlights. This 100% digital event brought together around a hundred participants.

The guests were able to follow first of all the statutory part of the General Assembly including in particular the announcement of the re-election of the President of the SNFA, Bruno Léger, and the presentation of the new SNFA Bureau. The second highlight was then articulated around three round tables dedicated to the circular economy, RE 2020 and communication, and moderated by renowned speakers. 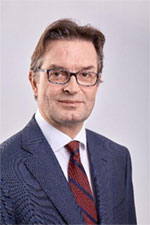 It was during an Extraordinary Board of Directors, which preceded the General Assembly of June 25, that the directors of the SNFA re-elected, by an absolute majority, Bruno Léger (Ouest Alu) as Chairman of the SNFA.

It is in this capacity that Bruno Léger spoke in his moral report available here.

This year 2021 was marked by numerous elections within the SNFA Bureau and it is a new team that comes to support Bruno Léger:

Three round tables to talk about current affairs 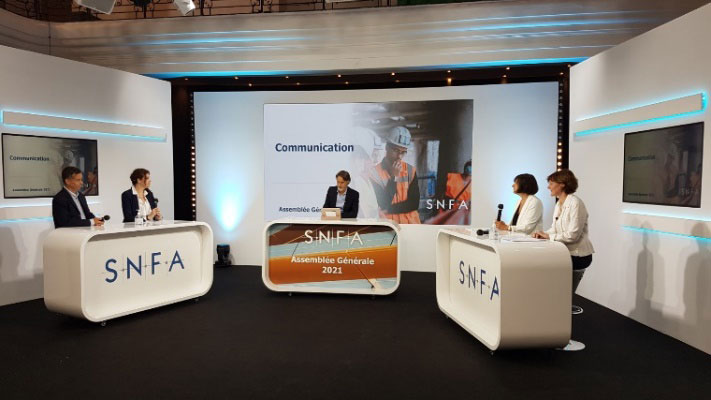 The sector is at the heart of major regulatory and environmental changes. To support market players and SNFA members, the professional organization has decided to bring an expert perspective on 3 topics that are topical in its sector: Circular Economy, Energy and Environmental Regulations 2020 and new products. of its communication.

Each round table was made up of renowned personalities in the profession, who enlightened the participants on these complex themes, the topicality of which is changing very quickly.

Regarding the circular economy, the AGEC law (Anti-Waste for a Circular Economy) is the one that initiates the greatest change, in particular with the arrival, on January 1, 2022, of Extended Producer Responsibility (EPR) applied to products. and building construction materials. Indeed, 46 million tonnes of waste are estimated for this PWR, ie three times more than the sum of waste estimated for all existing PWRs. These regulations require the creation of an eco-organization to meet the objectives of collecting, sorting and recycling waste. To promote the aluminum construction industry, SNFA is participating, as a shareholder, in the creation of one of these eco-organizations, named VALOBAT. To achieve this ambition, the latter can rely, among other things, on companies in the social and solidarity economy, which today manage the dismantling of joinery. For several months, SNFA has been working with all the players involved in the circular economy, with the objective of reducing the environmental impact of waste in the building sector.

Round table: Energy and Environmental Regulations 2020

The new regulations, both Energy and Environmental, are closely monitored by the SNFA. It is by considering each building according to its typology and its use that a contribution of adapted glass walls (windows, curtain walls, verandas) will allow to optimize its performance in terms of insulation, solar factor and light transmission. Solar gains have a major role to play in construction, whether it is to reduce heating consumption or to access natural light, for example.

It is in a context where discussions are underway with the government, in particular on the cladding of tertiary buildings with curtain facades, that this round table was held. For 50 years, this technique has offered endless possibilities, such as the optimization of floor surfaces, great architectural diversity of the building image and rapid installation. Improvements are obviously possible to reach the energy and environmental thresholds while continuing to comply with other regulations: acoustics, safety, fire, seismic,…. This technique should not be excluded from the Energy and Environmental Regulations 2020 (RE2020) but indeed integrated!

Finally, the SNFA is also taking action on the environmental aspect. It is particularly active in the creation of collective FDES (Environmental and Health Declaration Forms) whose CO2 weight of aluminum profiles is greatly reduced thanks to aluminum billets of controlled origin, produced by renewable energy or with recycled content.

Also, a collaborative project to create a configurator is underway and will make it possible to create, from the collective SNFA FDES called “mothers”, “Daughters” FDES called “project” in order to optimize the data with real specificities. (components and dimensions) installed.

In just under two years, the SNFA has made a strong shift in terms of communication. Today, the professional organization maintains an institutional stance and carries key messages such as the environment, recycling, the business line and the enhancement of the properties of the aluminum material. Messages which concern all the professions represented by the SNFA. This development is also marked by both traditional mass communication and hyper-targeted digital communication. The results of this new communication strategy are visible. In total, 20,6 million individuals were reached by the unifying messages of the SNFA in 2020, thanks to TV, Radio, digital and specialized press advertising.

At the conclusion of this round table, the SNFA presented in exclusivity the creation of its digital portal named Bâtir-en-alu.fr which will be put online in the fall of 2021. Reception and redirection space which will guide the professionals, individuals and future recruits towards the right information. Case to follow!