Evolution of the real estate market analyzed by French notaries 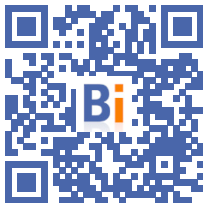 At the end of August 2021, the volume of old housing transactions cumulatively over the last twelve months exceeded, once again, the record volume of the previous month, with 1.208.000 transactions, up 23% over one year. The very strong fluidity of the market since the end of the first period of confinement and the effective implementation of economic and social shock absorbers have enabled the French to accelerate or materialize their real estate project, explaining the historically high levels observed at the end. of summer.

The health crisis has revealed new real estate behaviors, in particular movement from large metropolitan centers to smaller municipalities, including in neighboring departments. But there is no urban “exodus” to date. The observed trend concerns only a part of the population able to organize themselves, both personally and professionally.

It does not interest the majority of the French population and, correlatively, not that of first-time buyers. This trend, linked to confinements, could in fact only involve a specific and limited population, sociologically defined (age, profession, etc.). On the other hand, this movement towards smaller municipalities where the land pressure is less strong could concern more people, in particular those who no longer have the capacity to acquire a property in large urban centers, in view of the land tension. . These movements could also echo the end of the opportunity “offered” by low rates; the capacity to compensate in borrowed capital for rising prices could thus have reached its limit. The stakes on prices are high when the current lack of goods for sale automatically leads to their increase. 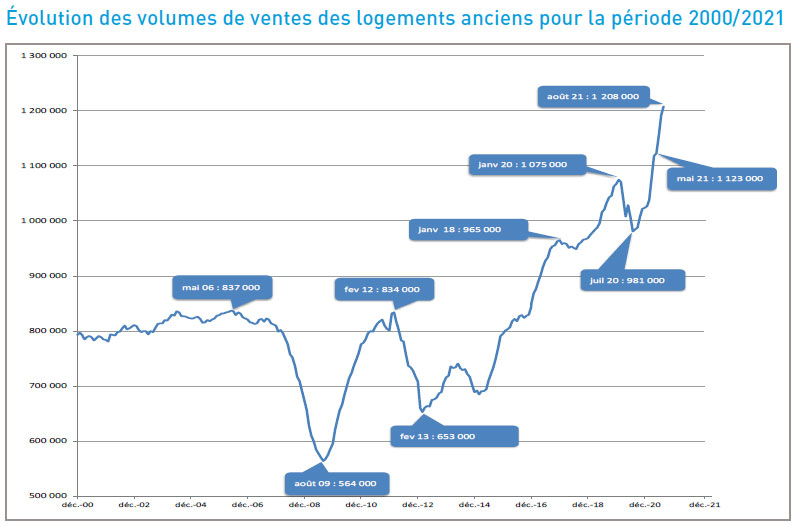 In any case, this increased mobility may help to explain the drop in prices in large urban areas and particularly in Paris, as well as the dynamism of prices in medium-sized towns. All things considered, prices are rebalancing on the territory. But this redistribution is a major issue with regard to the planning and development of the territory. This desire for greenery, the translation of a desire for “connected disconnection”, can only benefit small towns and medium-sized towns if they have the capacity to offer all the infrastructures and in particular very efficient means of communication, at the risk of leaving white areas.

In the provinces, the rise in the price of second-hand housing continues 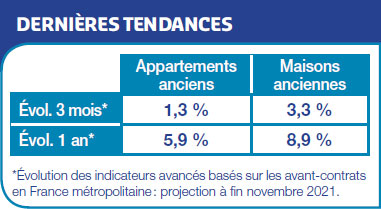 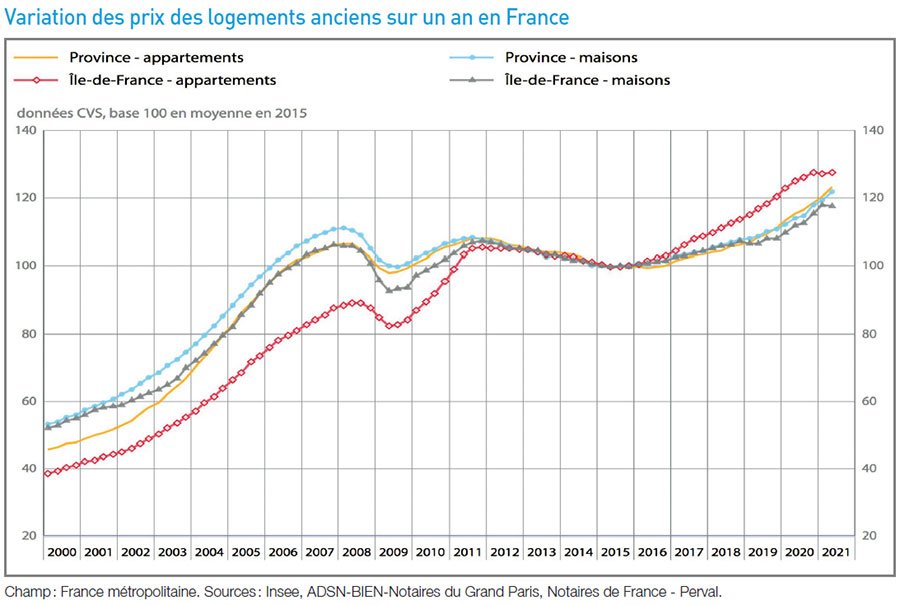 At the national level, the projections of the pre-contracts foresee, until November 2021, a continuation of the rise in prices. The changes over three months would be between + 1% and + 2,5% in old apartments and between + 2% and + 3,5% in old houses. Across the province, changes in the price indices for old houses follow this national trend. On the market for old apartments, as has been the case since the end of 2020, trends remain stronger in the provinces than in the whole of France. At the end of November, the increases over one year would be around + 6% in France against nearly + 9% in the provinces. 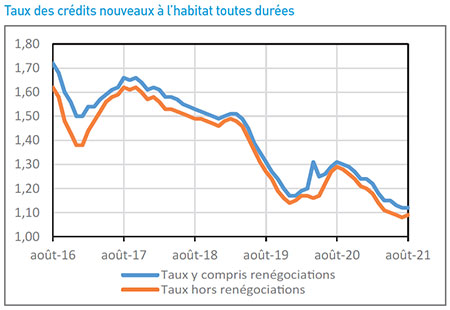 By a decision of September 14, 2021, the High Council for Financial Stability (HCsf) made the criteria it had enacted in January binding. These measures, which are therefore no longer simply recommended, will become applicable from January 1, 2022. The HCsf notes that the standardization of the granting conditions has increased the security of mortgage loans for households, securing them against over-indebtedness without however hampering their access to the loan. However, some first-time buyers may be penalized for these tightened conditions.

Trend stabilization compatible with this time of year

The market keeps pace as long as its fundamentals are not called into question. The health crisis has comforted many candidates for acquisition by refocusing them on their essential needs, which explains the strong resistance of the real estate market.

It will nevertheless be necessary to be attentive in the months to come, in order to detect if these high volumes did not result from an anticipation or even an acceleration of certain projects. Wouldn't these volumes be indicative of transactions that will not take place tomorrow? The current ratio resulting from the division of the annual number of transactions in the old compared to the overall housing stock stands at 3,3%, while it was slightly below 3% at the end of 2019. If the low rates and the collective enthusiasm augurs well for a still bullish end of the year with volumes above one million, the real estate market could then resume the pace observed before the crisis, with a volume of transactions in the former oscillating around one million. 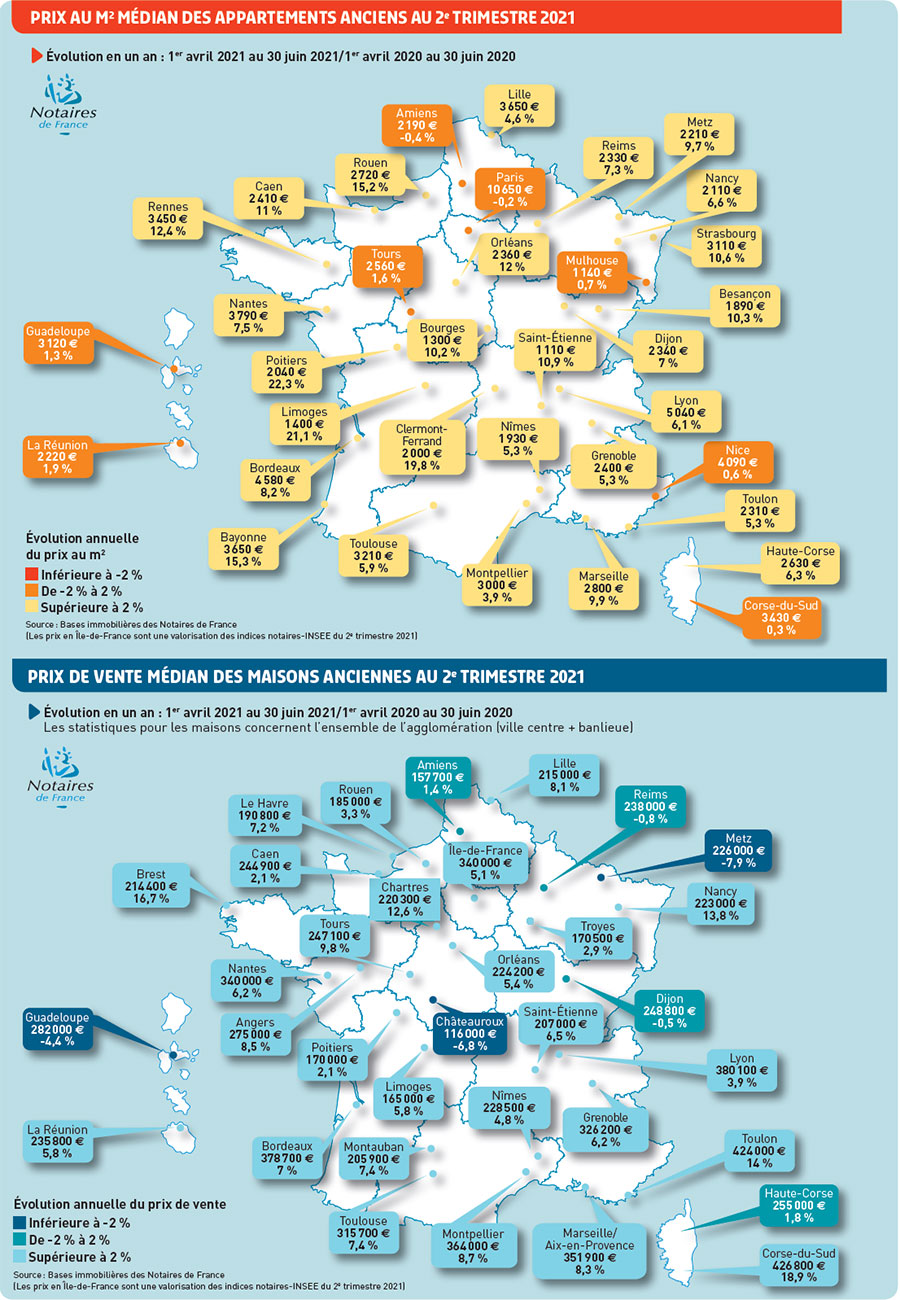