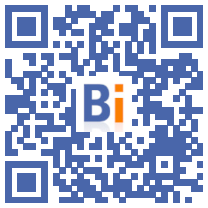 HelloWork, the leading digital player in employment, recruitment and training in France, publisher of the RegionsJob, ParisJob and Cadreo platforms, posted more than 912.000 job offers in the first quarter of 1. Its 2021 million Unique Visitors * each month allow it to provide a complete overview of employment dynamics in France. 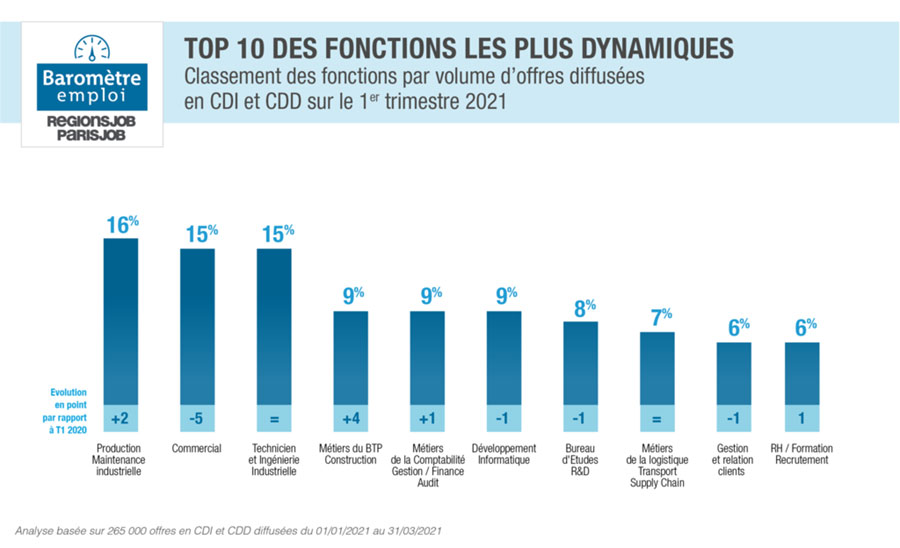 The ranking of the most dynamic functions is made up of the construction and construction trades (+ 4 pts of CDI / CDD and + 5 pts of temporary jobs), and industrial production and maintenance (+ 2 pts and + 4 pts). They also remain dynamic in terms of the volume of offers to be filled in the first quarter of 1; these jobs alone represent more than 2021% of the temporary vacancies to be filled. 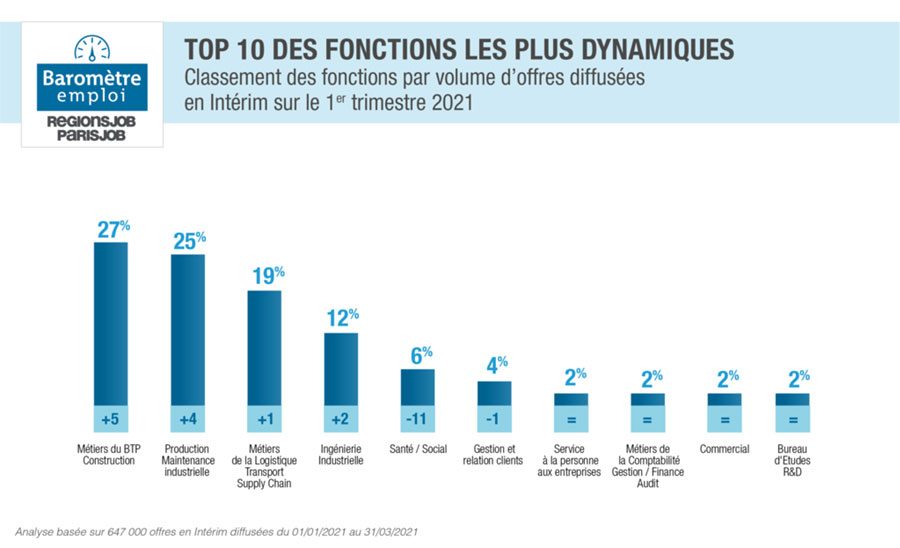 Technicians or industrial engineers are also in high demand (15% CDI / CDD and 12% interim). The Accounting, Logistics and Transport trades are also showing slight growth compared to the 1st quarter of 2020.

On the other hand, the commercial functions or those related to management and customer relations are less in demand than last year (respectively - 5 pts and - 1 pt).

And finally the evolution of temporary recruitments in the social health sector is closely linked to the strong demand at the end of the first quarter of 2020, which aimed to provide for the emergency of the health crisis.

“The construction, logistics / transport and industrial production trades are recruiting strongly at the start of the year. Conversely, retail trades are for the moment below the dynamics previously observed. The resumption of these recruitments is closely linked to the prospects for exiting the health crisis, ”observes David Beaurepaire.

Île-de-France and Auvergne-Rhône Alpes, at the top of the regions recruiting in France 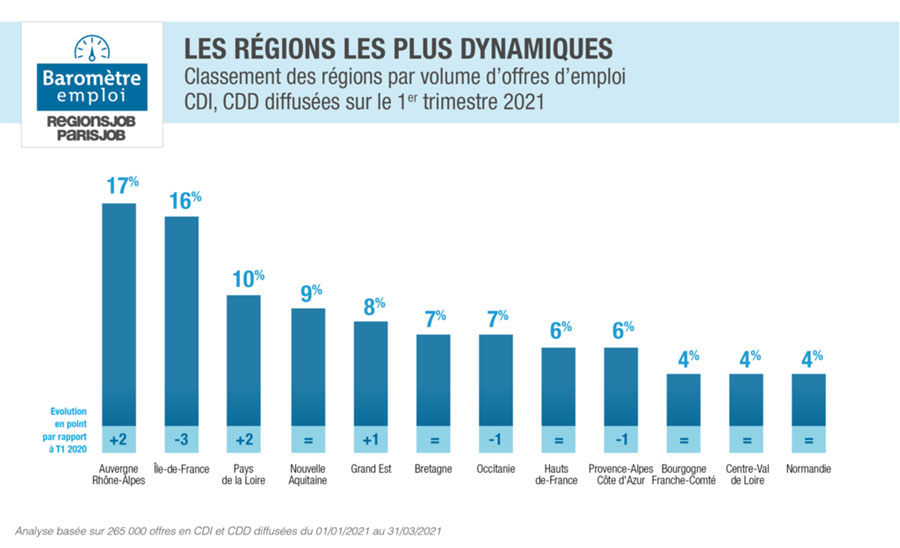 The barometer has seen some changes in the weight and dynamics of each region. Auvergne-Rhône-Alpes took 1st place in the first quarter in the ranking of the regions which recruit the most on permanent and fixed-term contracts with a share of 17% of the 265 jobs published and gained 000 pts of market share. If Île-de-France is the region with the strongest decrease (- 2 pts), it is nonetheless one of those offering the most CDI / CDD job offers, taking the 3nd place, with 2% of the national volume.

The Pays de la Loire and New Aquitaine are respectively in 3rd and 4th place with 10 and 9%.

It should be noted that the Occitanie and Provence-Alpes-Côte d'Azur regions show the strongest slowdown after Île-de-France for recruitments on CDI / CDD. Bourgogne-Franche-Comté, Center-Val de Loire and Normandy, for their part, each represent only 4% of the volume of job vacancies offered in the first quarter of 1. 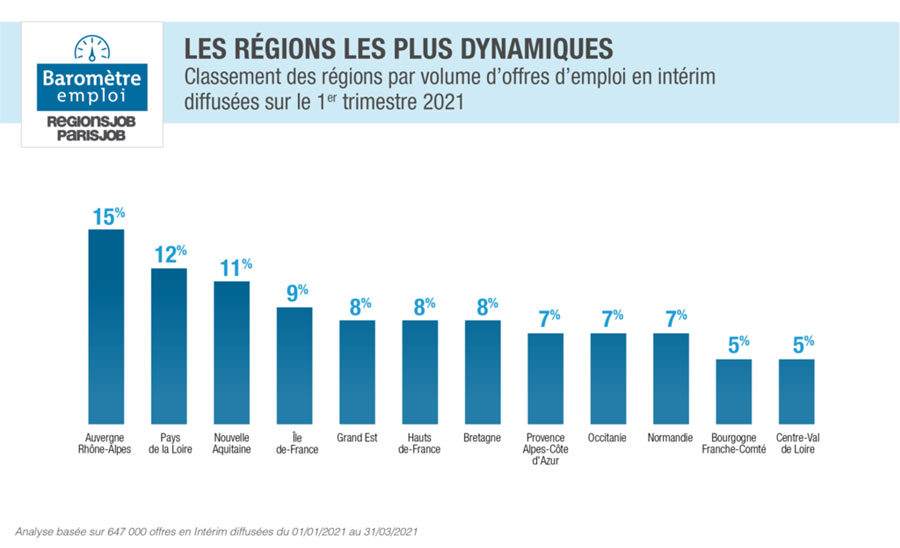 Of the 647 temporary jobs analyzed, Auvergne-Rhône-Alpes also occupies 000st place in the ranking of the regions which recruit the most in temporary work (1%). The Pays de la Loire and New Aquitaine respectively take 15nd and 2rd place with 3 and 12% of the national volume. Bourgogne-Franche-Comté and Center-Val de Loire are those with the fewest temporary work offers (11%). The 5th place in Île-de-France is abnormal and demonstrates the very strong impact of health constraints and the closures of establishments which weigh more heavily on the Île-de-France region.

The weight of large metropolises is decreasing, particularly that of the Greater Paris Metropolis 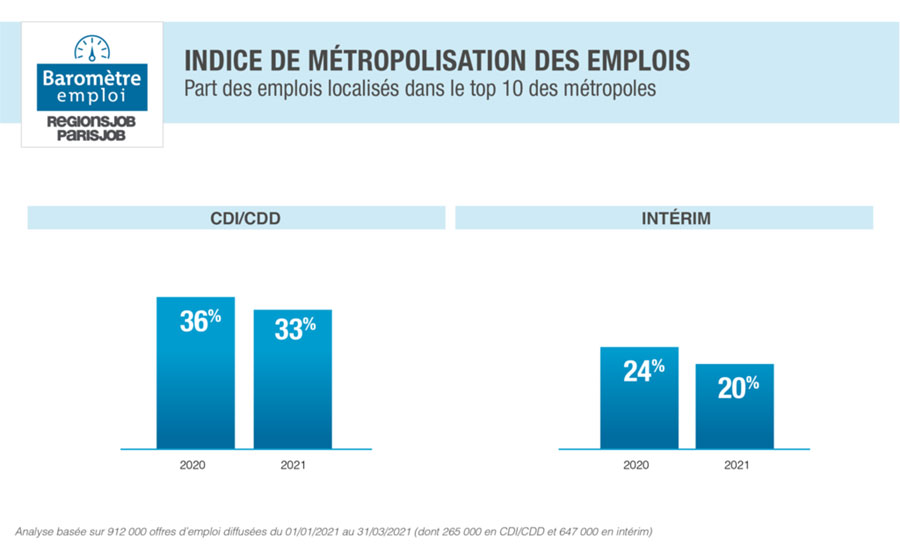 The Métropole du Grand Paris and the Métropole de Lyon together account for almost half of the CDI / CDD offers to be filled in this Top 10 of metropolises (46%). On the other hand, the Lyon metropolis presents a growth of 2 pts of the offers offered compared to last year at the same period, when the Greater Paris shows a drop in its vacancies of 4 pts.

Nantes Métropole and the European Metropolis of Lille, which occupy 3rd and 5th place respectively, also posted a market share growth of 2 pts while Toulouse Métropole fell by 1 pt. The Aix-Marseille metropolis occupies second place in the ranking for temporary work offers. 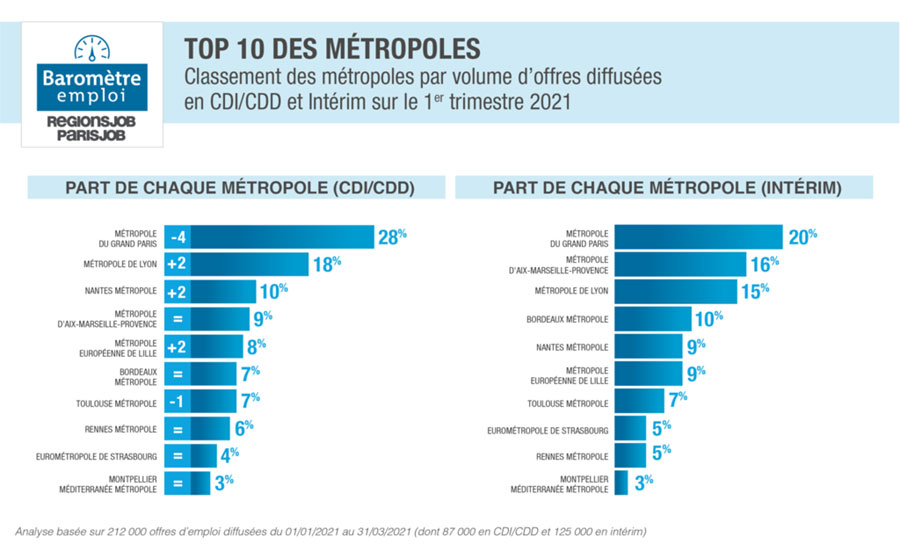 La Roche-sur-Yon, the most dynamic of medium-sized towns 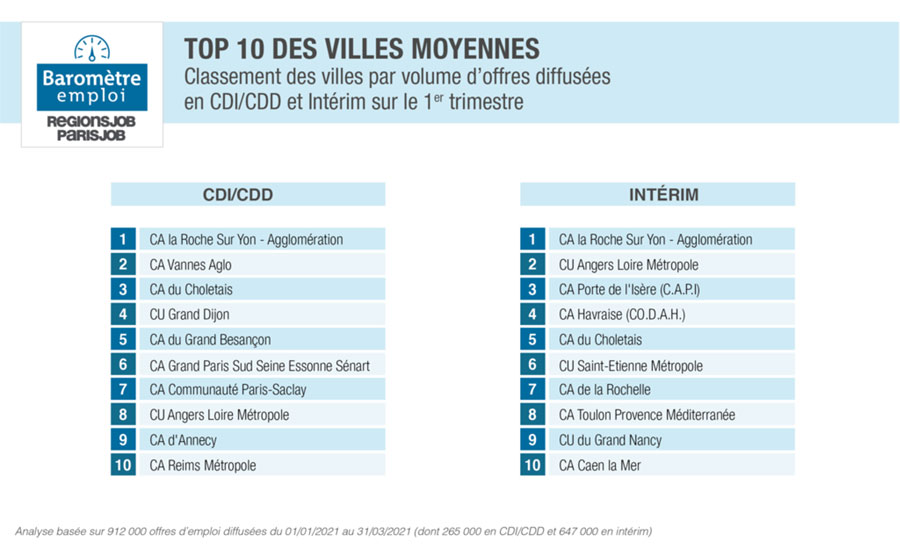 This year, medium-sized cities are doing well. The 10 most dynamic represent 7% of all open-ended and fixed-term contracts (versus 5% last year) and 8% of temporary jobs (versus 7% in 2020). This is the case of the urban community of La Roche-sur-Yon, which takes the lead in this ranking of medium-sized towns, both in terms of open-ended / fixed-term contracts and temporary contracts. The urban community of Angers Loire Métropole also occupies the Top 10 of this ranking, as does its neighbor Cholet (community of agglomeration of Choletais).

“We are seeing a drop in the concentration of jobs in metropolitan areas for the first time, -3 points compared to last year: is this a temporary phenomenon? It is not only Parisian since outside Paris, the share of the 9 largest metropolises has also fallen by 2 points. Are we heading towards a 'demetropolization' of jobs, with a more sustainable trend in favor of medium-sized cities? Our next barometers will tell us. Be that as it may, some medium-sized cities are doing their best both in terms of attractiveness for candidates but also in terms of economic dynamism and recruitment ”comments David Beaurepaire, Deputy Director of HelloWork.

Three quarters of job vacancies are offered on permanent contracts 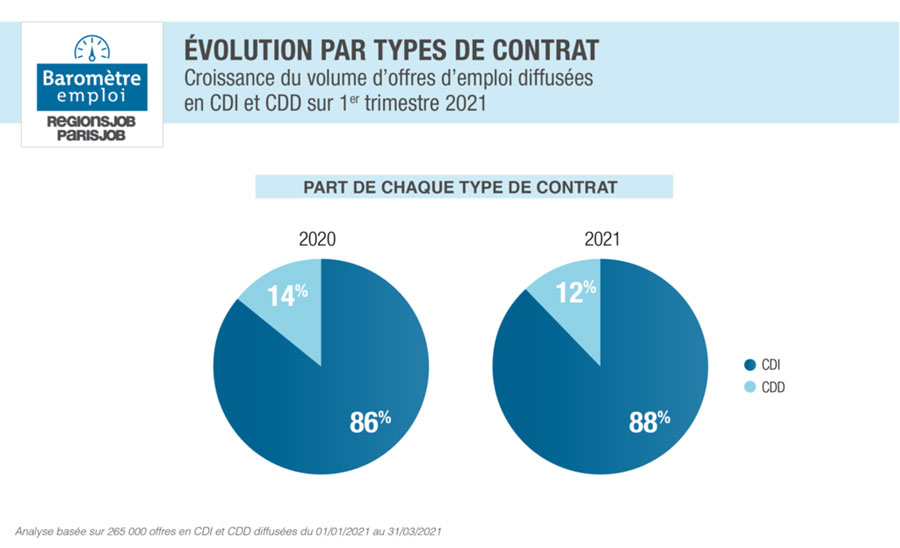 Despite the crisis, the share of permanent contracts is not decreasing. These long-term contracts still weigh 88% in 2021. “Some recruiters no longer hesitate to recruit on permanent contracts because, for certain qualified positions, they have no choice. Others also take into account the new flexibility of this contract in the event of disagreement, in particular termination of the agreement, ”concludes David Beaurepaire.