How to "horizontalize" a tower, according to the architect of the future tallest skyscraper in France

As on any construction site, the workers are currently wading through the mud. But in 2025, below the La Défense plateau, the business district near Paris, will rise an ultra-modern double tower, glazed and green, which will become the tallest office building in France. 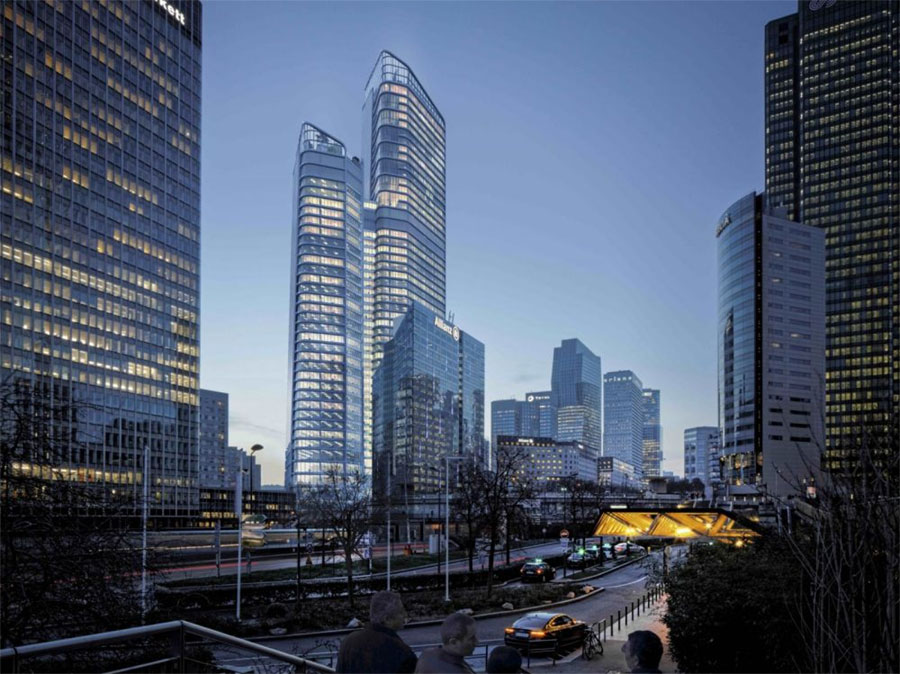 Dubbed "The Link", it will host the new headquarters of the French oil giant TotalEnergies and will reach a height of 242 meters.

A project worth one billion euros imagined by the architect Philippe Chiambaretta, of the PCA-Stream firm, used to professional real estate, and known among other things for his project to redevelop the Champs-Elysées.

"I hesitated to get started, because I was convinced that the model of the office tower at La Défense was all that should not be done," the architect explained to AFP, smiling, on the construction site Thursday.

This model of the tower remains difficult to overtake. "This allows a lot of people to be concentrated on the same unit," concedes Roland Cubin, operational director at Groupama Immobilier, the project's financier.

Because for his first project of this type, the architect aspires to nothing less than an aggiornamento. "The architectural challenge was to bring horizontality to this form of tower, which is essentially vertical", continues Mr. Chiambaretta.

To stretch the tower in width, "The Link" is in fact two towers, 228 and 165 meters high, which will be connected to each other by no less than 30 wide bridges, mostly vegetated.

The links between the two buildings will make it possible to create "platforms" of 3.000 square meters. Even 6.000 square meters, because the floors of each tower will be linked in pairs by open stairs: the goal is to allow employees to reach as many colleagues as possible without ever taking the elevator.

“An unprecedented surface for a La Défense tower,” says Roland Cubin. In total, The Link will accommodate up to 12.000 occupants over 130.000 square meters.

"The Link is the result of ten years of reflection on developments in the world of work", explains Mr. Chiambaretta, whose review he directs published in 2012 an issue entitled "After Office".

The tertiary sector is marked by profound changes, he explains. "We are no longer in the administration of industry, but in a knowledge capitalism. Collective intelligence is the engine of success," says the architect.

An emulation favored, according to him, by impromptu meetings and exchanges between employees: "Interior spaces must create these links."

The walkways and gardens of "The Link" will be so many spaces designed to promote these encounters. The "agora" at the foot of the building and the "panoramic club" in the middle of the towers are thought of as "village squares".

Arrangements that the architect has already experimented with elsewhere, in particular at #Cloud on the Grands Boulevards, which houses the offices of Facebook, Instagram and BlaBlaCar, or in the new offices of the Lazard investment bank.

If the project was conceived before the Covid, it nonetheless follows the contours of the post-pandemic world of work, according to Philippe Chiambaretta: "The Covid crisis has accelerated basic trends such as the need for outside and for horizontality."

After months of telecommuting, "coming to the office must be desirable" he explains, "to attract talent".

"We are trying to give meaning to the seat," adds Roland Cubin.

From this perspective, the well-being of employees becomes crucial. To ensure this, the architect for example created green spaces (2.800 m2 in total) accessible within 30 seconds of any workstation.

Offices are then thought of as productivity tools for employees, and no longer just as a simple roof.

"This subject is now taken over by human resources. It is no longer just a necessary evil, seen through the financial prism of the cost per position," said Chiambaretta.