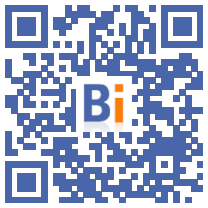 Paris La Défense is launching the experimentation of two new solutions for refreshing public spaces. The fruit of several months of research in partnership with Efficacity, the French R&D institute dedicated to the energy and ecological transition of cities, these innovations will improve the thermal comfort of users of the district, more particularly during the hot summer months. These two oases of freshness have just been installed, on an experimental basis, until the end of September. 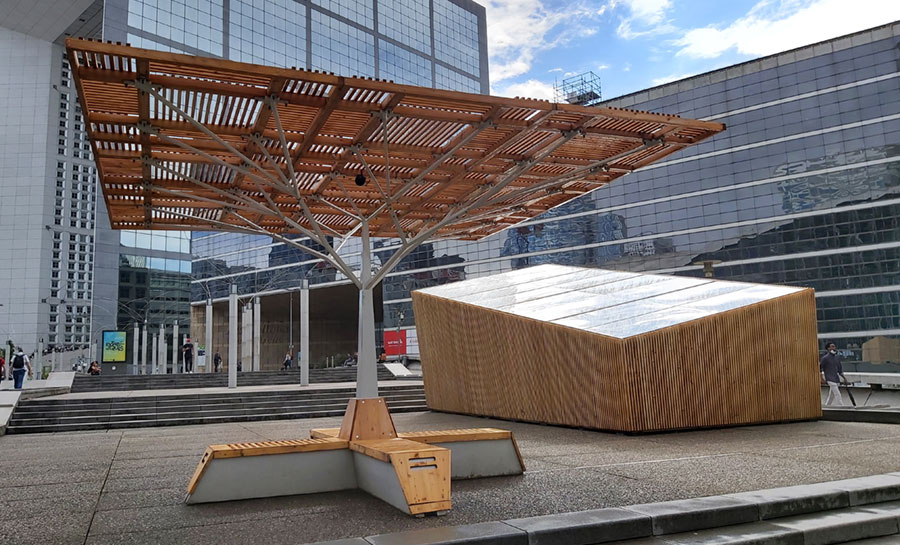 Consequences of global warming, the recent and frequent periods of heatwave necessitates providing urban areas with refreshing spaces. The characteristics of the business district make it necessary to look for reversible devices and alternatives to greening solutions. In order to prevent surfaces from heating up and heat building up in its urban space, Paris La Défense is installing two experimental Cool Oases, for a period of approximately three months. Deployed in different formats, these two solutions will thus be evaluated, all summer long, by residents, employees, traders, students and tourists visiting Paris La Défense. If they prove to be conclusive, particularly in terms of environmental impact, they can be sustained and multiplied on a large scale. Improving outdoor thermal comfort in public spaces is a major challenge for Paris La Défense.

For Pierre-Yves Guice, Managing Director of Paris La Défense, “The rise in temperatures is a real challenge for an urban and mineral district such as Paris La Défense. The reflection carried out alongside Efficacity leads us to imagine new solutions to improve urban comfort. The proposals developed are interesting because they are easily duplicable on the territory ”. 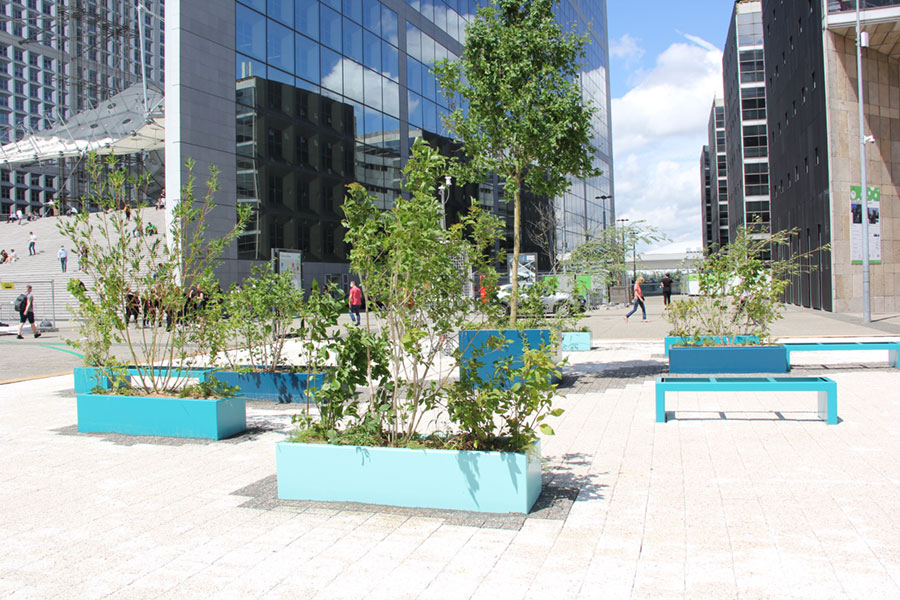 Improve the comfort of use, between shade and freshness

A refreshing and self-sufficient platform, a proposal by Seureca

Installed on the forecourt of La Défense, the urban cooling system offered by Seureca (Veolia Consulting Engineering Department) in partnership with the companies Alkern (leader in the world of prefabricated concrete products) and Vertuo (manufacturer of urban green modules) , is composed of a paved platform of 200 m² placed on the ground and several cooling solutions based on the vegetation itself (shading and evapotranspiration of plants), refreshing paving stones and street furniture allowing the storage of rainwater .

This mobile installation is based on the concept of circular economy by offering autonomous cooling in water and energy. Collected via a network under the slab, rainwater is stored and then channeled to the island, allowing the paved area to be humidified and the plants to be supplied by a drip system. The weather station installed at the heart of the device enables the cooling request to be triggered or stopped. Assembled in this way, the island creates a cool, comfortable and easily accessible relaxation area for users.

The Skycooling fresh island, a proposal signed by ENGIE Solutions

Located on Place Carpeaux, the Skycooling fresh island is an innovative street furniture device. Equipped with four seats and independently supplied with cold, which is a world first, the set offers users a cool stopover, thanks to the Skycooling panel technology developed by the ENGIE Lab CRIGEN research center, in collaboration with ENGIE Solutions.

Covered with a wooden canopy of 25 m², the island generates a beneficial shade for the people seated below. Each seat is equipped with a cooling air distribution system, thanks to a set of fans and air / water exchangers powered by Skycooling cooling technology, a system that does not generate local heating, and respects the environment. environment.

Islands of freshness designed in partnership

These Oases of freshness are part of the continuation of the reflection and research carried out with Efficacity, the institute for the energy transition of cities. Remember that Paris La Défense recently experimented with four energy oases on its territory to produce, store and offer free of charge to users of the district to supply themselves with local renewable energies (solar, wind, etc.). These energy or thermal experiments also constitute a means of testing technologies and innovations which could, tomorrow, occupy a full place in the daily life of Paris La Défense.