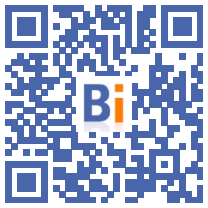 The Altares group, historical expert and referent in business information, has just unveiled in a study the figures for business failures in France for the 2nd quarter of 2021.

With 6.587 open insolvency proceedings, up 14,2% compared to the 2nd quarter of 2020, the volume of judgments remains twice lower than the pre-Covid level. In addition to direct liquidations which remain very frequent, signs of weakening are emerging in particular for very small businesses, the building sector and the Ile de France and PACA regions, which are much more severely impacted than the national average by a catching up of defaults.

Mid-size companies and SMEs, spared more than in the spring of 2020, could see their recovery thwarted by the surge in commodity prices, exhausting for the treasuries.

Thierry Millon, director of Altares studies: "As expected, the months of April and May 2021 have logically registered a very strong increase (respectively + 54% and + 35%) compared to the same months of 2020. A period then marked by the first confinement and the outbreak of" whatever the cost ”government. June is down (-17%) and audiences are still far from having regained their pre-Covid pace. But serious signs of weakening are emerging. The rate of direct judicial liquidations (3 out of 4) remains very high. Very small businesses (+ 18%) represent nearly 90% of failures. In Ile de France, where the number of procedures soars by 37%, the rate of direct liquidations exceeds 80%. Finally, the construction sector, paralyzed for several months in 2020, concentrates more than a quarter of judgments (+ 44%). "

Up 14,2% over three months, the number of business failures remains paradoxically low

6.587 companies failed in France during the second quarter of 2, or 2021% more than during the same period of 14,2, of which a month and a half covered the first confinement.

At the end of June 2021, in data smoothed over one year, the trend remains favorable compared to June 2020 (-28%). But the downward momentum is slowing down seriously compared to the end of March (-40%).

The rate of direct liquidations remains very high but the number of jobs threatened falls below the threshold of 20.000

The rate of direct liquidations (75%) remains well above its traditional values ​​(68%), confirming that companies that appear in court are in such a fragile situation that it is no longer possible to offer them alternative. It is also a sign of insufficient awareness among managers of the existence of preventive measures.

The number of jobs at risk has declined very significantly and falls below the threshold of 20.000, whereas it was twice as high a year ago.

Remember that in the second quarter of 2, while the number of judgments was halved (2020 vs. 5.766 in the second quarter of 12.347), the number of jobs threatened rose from 2 to more than 2019. This phenomenon was explained by the failures of several major retail chains, revealing the extent of the crisis facing our economies. Clothing concentrated more than one in three threatened jobs.

The smallest companies concentrate almost 9 out of 10 failures

SMEs with 10 to 19 employees are also under pressure (+ 2,7%). In contrast, the number of insolvency proceedings fell for all other sizes of business. The drop is particularly marked among SMEs with more than 50 employees. No direct judicial liquidation has in fact been pronounced for companies with more than 100 employees.

In the spring of 2020, the economy was at a standstill and business failures were posting historic declines in all sectors. A year later, health restrictions were loosened but aid was reduced. In all activities, if defaults remain well below their 2019 values, they are on the rise again. 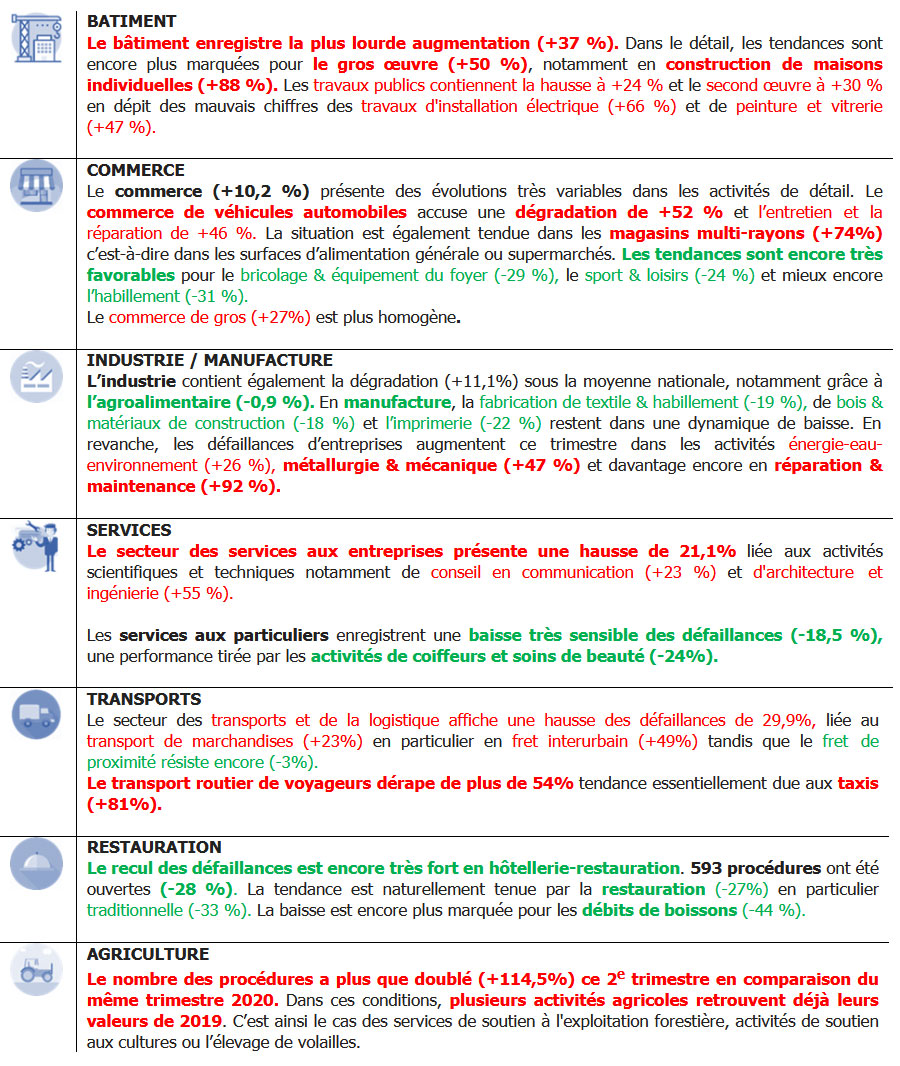 Two regions recorded an increase in the number of failures of more than 35%. In the lead, Ile de France (+ 37,3%), driven by figures from Paris. Note that the Yvelines and the Val de Marne are still resisting.

Provence-Alpes-Côte-d'Azur follows (36,9%), whose development is aligned with that of Bouches-du-Rhône. The Var contained the rise but the Alpes-Maritimes recorded a strong deterioration. 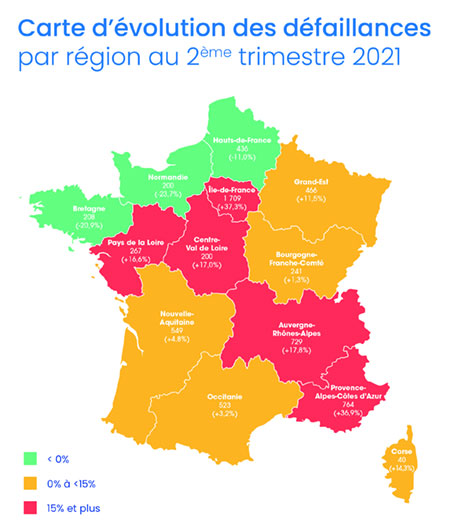 With lower volumes, Corsica recorded an increase of 14%.

The Grand-Est region (+ 11%) is below the national average, thanks in particular to stable levels of failures in the Bas-Rhin.

Three regions stand out with a still very noticeable drop in the number of procedures in the second quarter. This is the case for Normandy (-2%), Brittany (-24%) and Hauts-de-France (-21%).

Thierry Millon concludes:“At the start of the third quarter of 3, the business insolvency front therefore remains very calm. Since the beginning of the year less than 2021 judgments have been pronounced by commercial and judicial courts, against 15.000 over the first six months of 17.000 and 2020 over the same period in 28.000. The third quarter, lightened by the vacancies of been in the courts, but also favored by a favorable economic situation, should not bring the accumulation to nine months well beyond the 2019 defects.

Unless a persistent epidemic returns, financial infusions should be disconnected in the coming weeks. However, this should not trigger over the last three months of the year a strong surge in defaults and a return to the level of 2019. Indeed, mediation and the amicable treatment of late payments should still be privileged. , thereby limiting forced recovery and assignments.

On the other hand, the surge in commodity prices is creating new concerns. Since they cannot be easily passed on to sales prices, these increases risk putting cash flow under pressure, sometimes requiring having to tap into EMPs or even play on supplier credit and lengthen payment terms. If they were to persist severely beyond the summer, these increases would then weigh on margins and could seriously thwart the recovery or even jeopardize the sustainability of fragile SMEs and mid-cap companies. "