Worried about rising energy prices, 55% of mayors plan to throw in the towel in the next election 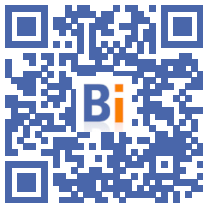 In the current context where soaring energy prices are at the heart of the news, Hellio, a key player in energy management, wanted to take the pulse of local elected officials to measure the impact of this increase in the territories and understand the solutions envisaged to deal with it.

Ifop conducted for Hellio, in partnership with Public Actors, a study to which 609 mayors representing all the local authorities in France responded between October 20 and November 10, 2022 [1].

A gloomy vision of the future 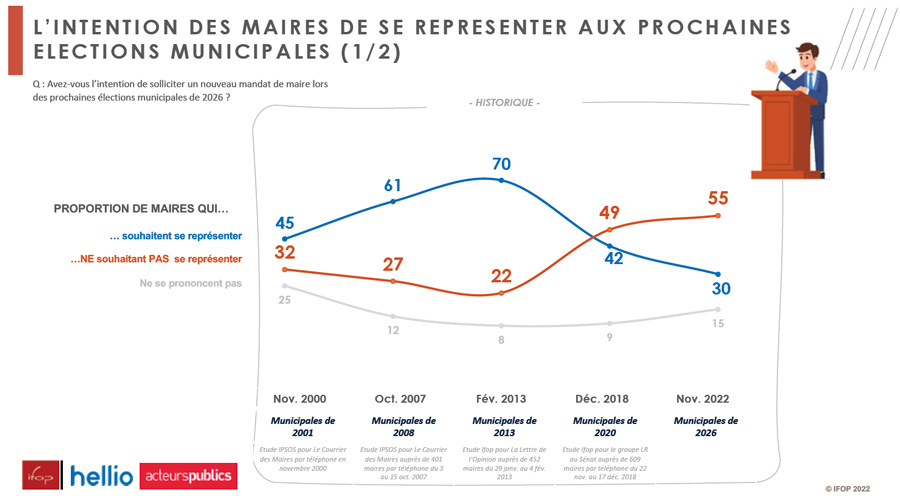 For Ifop, this is a result not seen for 20 years! 55% of mayors do not intend to run for another term in the next municipal elections in 2026.

In the current context, their morale is at half mast. Rising energy prices, overwork, increasing responsibilities, too low allowances, projects to be carried out with a reduced operating budget, all of these concordant factors amplify the gloom of the mayors.

This trend is exacerbated in municipalities with 2.000 to 9.999 inhabitants (59%), where local elected officials find themselves in direct contact with their constituents and must manage increasingly conflicting situations.

To contain the haemorrhage and avoid paying the additional cost to energy suppliers, pooling energy supplies with other communities is one of the solutions considered by just over half of local elected officials (55%). Hellio specifies that this is already the case for certain municipalities which have joined forces through departmental energy unions. This majority is more pronounced in municipalities with more than 10.000 inhabitants.

33% of mayors are satisfied with the support of the Government to fight against rising prices. The State must intensify its efforts to support local authorities, elected officials expect more! Since this study, the announcements made have provided some answers, but these remain insufficient with regard to the means necessary to accelerate the energy renovation of public buildings:

For Pierre-Marie Perrin, director of public and legal affairs at Hellio: “A positive signal, the Government has just announced, since the completion of this study, a commitment of 1,5 billion additional euros for energy renovation within communities. This measure was passed as part of the 2023 finance bill.

Approval of the measures and financial arrangements announced 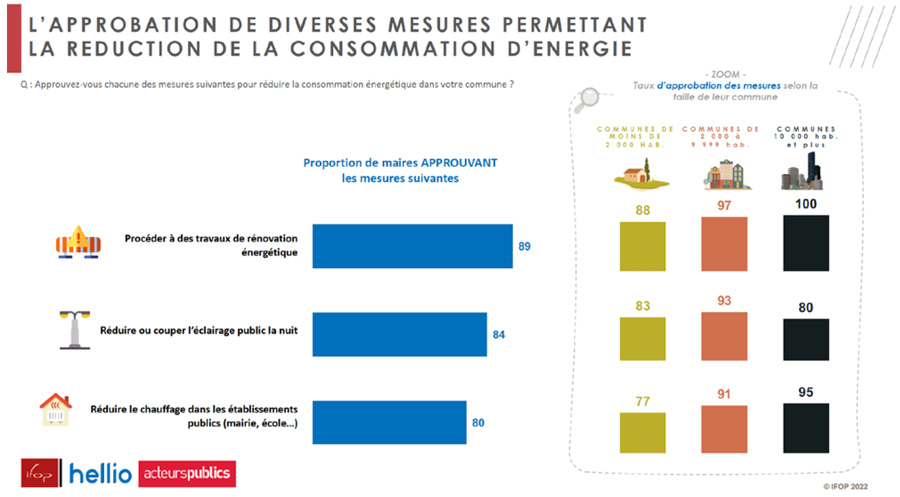 To reduce energy consumption and avoid cuts this winter, the Government has called on local authorities to take a number of measures. Among them, the carrying out of energy renovation works is unanimously approved by 89% of respondents. Next come sobriety actions such as reducing or cutting off public lighting at night (84%) and lowering the heating in public establishments (town hall, school, etc.), decisions that are poorly perceived by citizens .

Rural municipalities with less than 2.000 inhabitants are a little less inclined to lower the heating, revealing a split between small (77%) and large communities (95%). This difference can be explained in particular by the fact that the proportion of thermal sieves in the assets managed by rural municipalities is generally higher than the average for local authorities. Turning down the heat only makes the feeling of cold worse.

To limit the impact of rising energy prices, several measures have been put in place or are being considered by the State.

Perceived as essential by 29% of mayors, the tariff shield nevertheless deserves to be extended and intensified for an overwhelming majority, in a uniform manner regardless of the size of the communities.

As for the financing of aid for the energy transition of public buildings, the same goes, with even more dissatisfaction: 73% of elected officials believe that they are insufficient. However, this result remains to be qualified: the announcement of the additional budget of 1,5 billion euros, made after this survey, should help to reassure elected officials. The only downside is that this envelope remains well below the 100 billion allocated during the recovery plan.

The establishment of a financial system comparable to MaPrimeRénov' has won clear support: 90% of mayors wish to benefit from it. Well understood by the general public since the transformation of the tax credit into a fixed bonus, this lever is also of interest to local authorities.

Decrees taken to improve the energy performance of little-known buildings 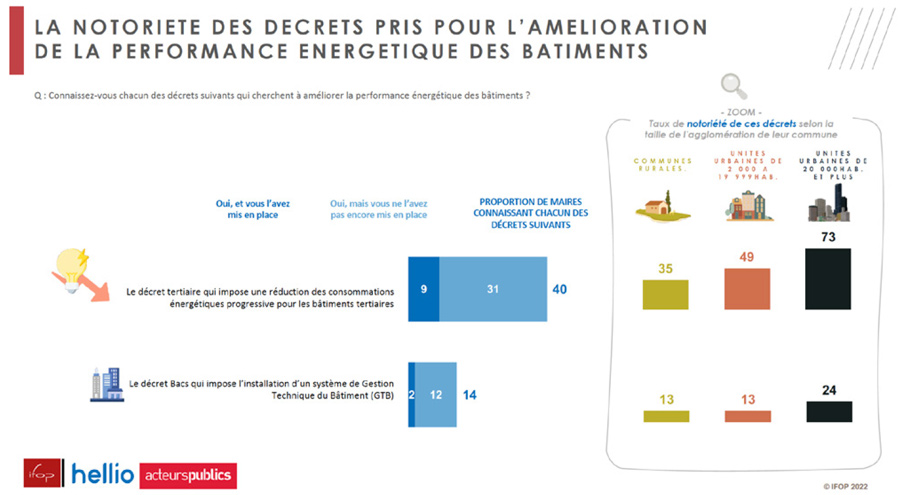 A phenomenon considered worrying by Hellio, 60% of the local elected officials questioned indicated that they were not aware of the tertiary decree, also called the Tertiary Eco Energy system, even though it has existed since 2019, with an increased proportion among elected officials from rural municipalities (75 %).

Local authorities have until December 31, 2022 to declare the energy consumption of their tertiary building stock concerned on the OPERAT platform of Ademe. Will this decree manage to achieve the defined objectives? This is the question that may arise.

Another regulatory deadline even more largely ignored by an overwhelming majority (86%): the BACS decree (for "Building Automation & Control Systems") requires the installation of an automation and control system in certain tertiary buildings by January 1, 2025.

For Augustin Bouet, Key Accounts Director at Hellio: “These results reveal a need for training and even greater awareness-raising and information work, particularly among elected officials in small municipalities. However, local authorities are one of the groups most affected by these decrees. » 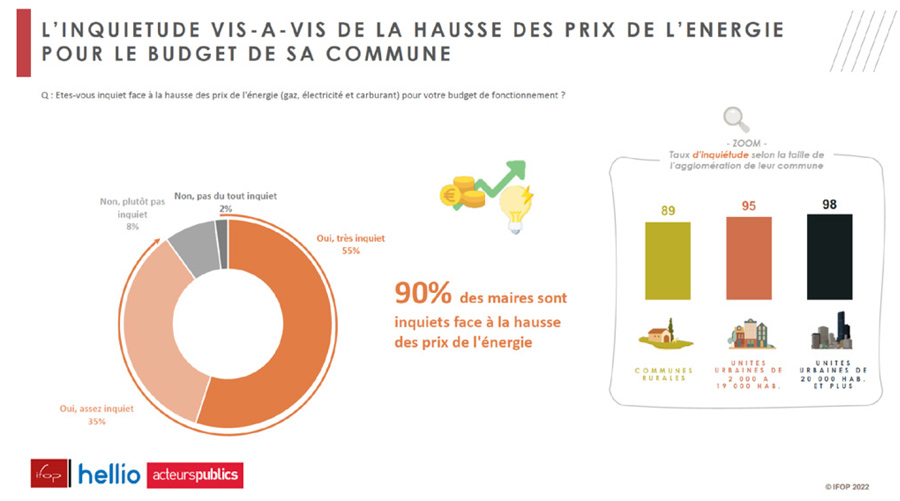 It's unanimous! An overwhelming majority of mayors (90%) are worried about rising energy prices (gas, electricity and fuel) for their operating budget. They are even 55% to say they are very worried. A sentiment shared by all types of communities, whether small or large.

On average, the relative share of energy in the operating budget of mayors has increased by 4 points in one year, going from 10% in December 2021 to 14% in November 2022. But this result is to be balanced according to Hellio.

For Augustin Bouet: “This is only the beginning, this increase should worsen in the months to come since a large number of communities undoubtedly still benefit from tariffs negotiated before the increase and call on institutional suppliers, such as EDF or local establishments. distribution, having less impact on their prices. »

The measures envisaged to deal with the rise in energy prices 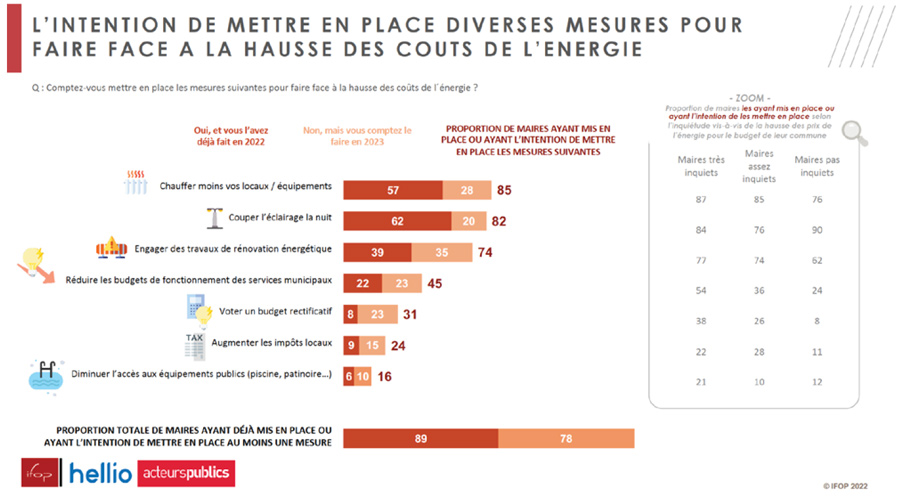 To counter the rise in energy costs, the mayors primarily favor actions of energy sobriety, such as heating premises and equipment less (85%) or switching off the lighting at night (82%). Less restrictive and quicker measures to put in place, but which will not solve the long-term problems.

More difficult to implement, energy renovation works only come in 3rd position, with 11 points less (74%), although they represent a solution for consuming less and better, in a more sustainable way, with the key to much greater energy savings. 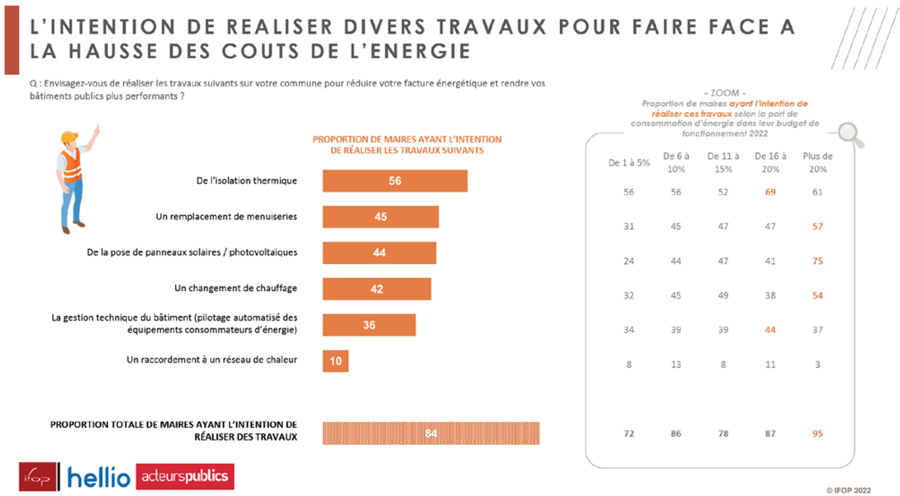 For Augustin Bouet: “To preserve the environment, energy sobriety levers will not be enough. »

The top quartet of energy renovation works most popular with elected officials corresponds to the one for which Hellio is most requested by local authorities: thermal insulation (56%), replacement of joinery (45%), installation of solar / photovoltaic panels (44%) and heating change (42%).

Disappointing results for connection to the heating network

Hellio regrets that the connection to a heating network comes far behind, with only 10% of intentions. An interesting solution in terms of energy independence, use of renewable energies, energy efficiency and real reduction in consumption over the long term.

This result reveals that there is work to be done on the part of the State on training and raising awareness among local authorities on the subject of heating networks. Many communities think that this heating system is reserved for large cities, while there are many heating networks in rural areas.

For Augustin Bouet: “It is essential to develop new heat production units because the capacity to heat upstream is lacking today, the only connection is not enough. There is a lot to be done with players in industry and agriculture on the recovery of waste heat, often unused, which could be used to supply heating networks. This is a subject that needs to be brought up to date and that needs to be helped. The connection already benefits from financial aid, via the Heating Boost for Energy Savings Certificates (EEC), but we can go even further by setting up additional levers dedicated to heat production units. »

Reassuring observation, the closure of public services, such as nurseries or swimming pools, is not envisaged by the communities, they are only 9% to think about it.

For Pierre Maillard, CEO of Hellio: "In a context of energy crisis never known before, and growing concern among the mayors of France in the exercise of their functions, private players like Hellio must increase their support for elected officials in the renovation and energy efficiency of their public buildings. Accelerating this energy transition will quickly bring comfort to users of the public service, but also to restore new room for maneuver for elected officials. That's what we're up to! »