Who are the new MPs most affected by energy sieves in their territory? 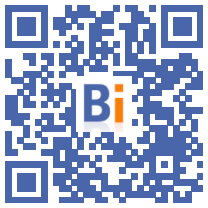 In the aftermath of the second round of the legislative elections, the newly elected deputies are preparing to sit in the National Assembly for the 16th legislature of the Fifth Republic marked by a context of climate emergency and rising energy prices linked to the Ukrainian conflict.

There is no doubt that the thermal renovation of buildings, and in particular of energy-intensive housing known as “thermal sieves” will remain a priority issue. The Climate and Resilience Law of August 22, 2021 provides in particular for the gradual ban on the rental of “strainers” from 2023, 2025 and 2028, according to their Energy Performance Diagnosis (EPD) class.

The method of classifying the constituencies used uses the Demographic files on housing and individuals (Fidéli 2018), on the basis of the DPEs of 2017 and 2018 (old version before the reform), cross-checked with the interactive map of the DPEs of Ademe , and focuses on the rate of F and G housing on all housing by department.

This ranking is also illustrated by another indicator: the household energy vulnerability rate at the regional level. Energy vulnerability, also called energy poverty by the National Observatory of Energy Poverty (ONPE), is defined as "the fact of experiencing particular difficulties in one's home in obtaining the supply of energy necessary to satisfy one's needs. basic needs due to the inadequacy of its resources or its habitat conditions”. 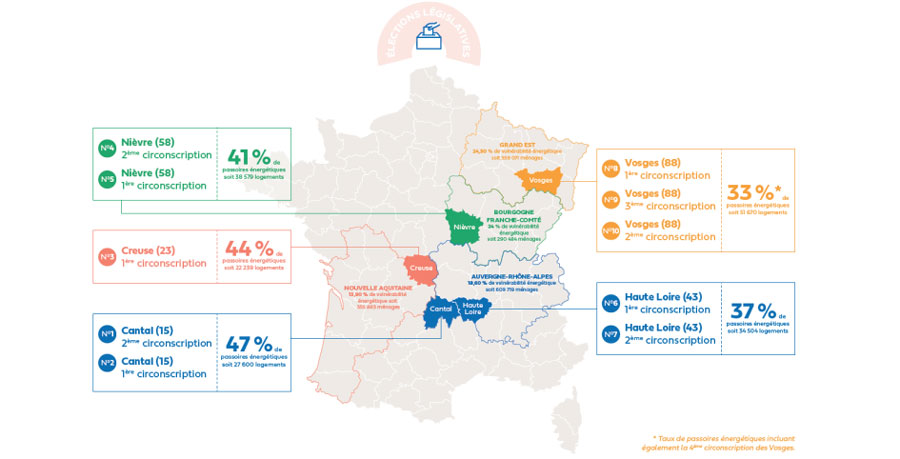 For Marina Offel, Hellio Public and Legal Affairs Manager: “Following this observation, the new deputies recently elected from the ten constituencies which have the most housing classified F and G in the DPE have five years to take part in the challenge of 700.000 renovations – global we hope – per year announced by Emmanuel Macron, in order to improve the quality of housing on their territory. The energy renovation of buildings is however hampered by the insufficiency and instability of financial aid to households and condominiums, the numerous regulatory changes, the difficulties of the work sector to recruit and train with the aim of promoting only global renovations and no longer by small gestures. The awareness and involvement of parliamentarians on these issues will be decisive!”

On Ademe's interactive DPE map, housing classified F and G is mainly concentrated in the second constituency of Cantal, represented by MP Jean-Yves Bony, re-elected for a second legislature (LR).

The 2st constituency of Cantal, represented by Vincent Descoeur (LR), is in XNUMXnd position in the classification of classified accommodation F and G.

In 6th and 7th position of the 10 districts with the most energy sieves, two others are also located in the Auvergne-Rhône-Alpes region, the 2st and 43nd district of Haute-Loire (34.504), which list 92.304 dwellings classified F and G to ECD, out of a total of 37, or XNUMX%.

It should be noted that all of these MPs, who have a high rate of F and G classified housing in their constituencies, must also be vigilant about the rate of energy vulnerability. Indeed, the Auvergne-Rhône-Alpes region, which includes the districts of Cantal and Haute-Loire, has 609.719 energy-vulnerable households on its territory, which represents 18,60% of households in the region.

If the dwellings classified F and G are not necessarily occupied by energy-vulnerable households, a certain number of them still occupy these dwellings. In fact, the fight against “thermal sieves” is an issue of social justice for these people. Newly elected officials have every interest in building their skills and analyzing data from their territory to meet the challenge of energy renovation.

The districts of Creuse, Nièvre and Vosges complete the ranking

The constituency of Creuse (23) is in 3rd position, the two constituencies of Nièvre (58) in 4th and 5th position and the three constituencies of Vosges (88) occupy the last three places in the ranking. These departments have respectively a rate of housing classified F and G of 44%, 41% and 33%.

Regarding the vulnerability rate, the districts of the Vosges department are located in the Grand-Est region, which lists 559.071 households in a situation of energy vulnerability, or approximately 24,30% of households in the region. For these households, the energy expenditure needed to heat their home and domestic hot water represents a high proportion of their income. For the year 2019, it is estimated that the average household energy expenditure was €1.602.

Focus on the capital: Paris, a very high number of energy sieves despite a relative rate of housing classified F and G at the DPE

According to the 2018 Fidéli survey and on the basis of Ademe's DPEs of 2017 and 2018, the Paris department comes in 8th position among the most energy-intensive departments. Compared to the other departments present in the previous ranking, the 75 counts a much larger number of colanders to renovate: 327.733 dwellings against 34.900 dwellings on average for the departments of the top 10. Out of a total of 1.062.232 dwellings, the share represents for as much as only 31% of the real estate stock of the city of Paris.

Faced with the dilapidated state of this housing stock, the planning rules and architectural constraints that apply to Haussmann-style buildings do not facilitate efficient and comprehensive renovations that would allow these dwellings to come out of energy class F or G. the problems of governance of the co-ownerships and the insufficiency of the financing granted to the works.