The "March after" brought together 115.000 people for the climate on Sunday

Sunday, a few days after the vote of the law "Climate and Resilience" and while sources affirm that Emmanuel Macron gives up including the environment in the Constitution, 115.000 people participated in 163 marches throughout France as well as in Belgium , in Luxembourg and across the Channel in order to denounce the climate failure of the five-year term and affirm their desire to build, together, a just and sustainable future.

730 organizations signatories of the appeal to come together were present including Alternatiba, Union Syndicale Solidaires, Friends of the Earth, CGT, Secours Catholique and Greenpeace France, to parade this Sunday, May 9 alongside citizens and members of the Citizen's Convention for the Climate .

In Lyon 7.000 people marched and 2.500 in Rennes. In Paris, 56.000 people marched, the procession left at 14 pm from the Place de la République, the demonstrators marched determined and in joy alongside the street artists, fanfare, batucada and dancers who performed on arrival of the procession to Bastille, three hours later. Jean-François Julliard, director of Greenpeace France, Cécile Duflot, director of Oxfam France, Cyril Dion, director and environmental activist and many others spoke on the final stage to close the march and return to the reasons for '' such a mobilization: "By mobilizing, we see that this tenacity begins to pay off because the mobilizations have enabled us to condemn the state" adds Cyril Dion. 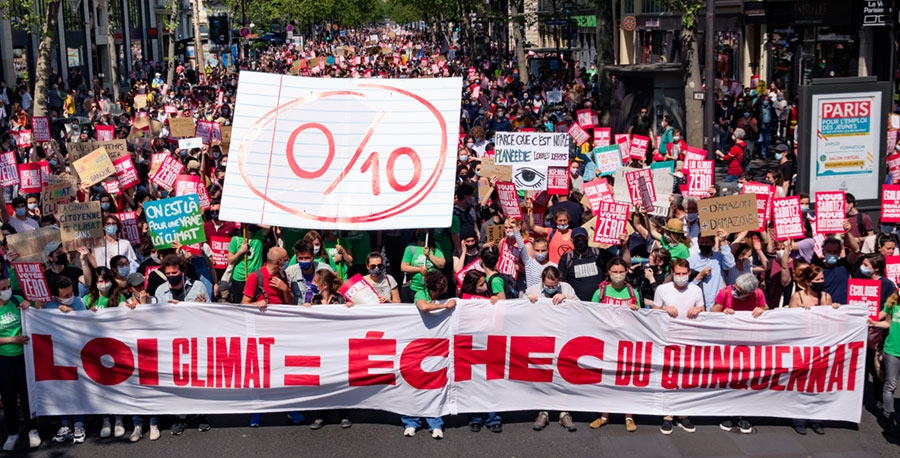 The organizers denounce the sabotage of the climate law which marks the climate failure of the Macron five-year term. While the majority claims a "reasonable" ecology and welcomes the progress of the law, these mobilizations denounce the denial of democracy of which the government was guilty during the examination of the law. All maneuvers have been good to limit the ambition of the text. Patricia Samoun, one of the 150 of the Citizen's Convention for the Climate, regrets: “It's a shame and disappointing, it was a magnificent experience of participatory democracy, which went in the spirit of a significant reduction in greenhouse gas emissions and towards more social justice. "

Social justice is particularly absent from the text. For example, no concrete measure to regulate economic activity in the most polluting sectors has been taken, although this is an essential step in reducing greenhouse gas emissions. "The government chooses to privilege the private interests of the richest" adds Manon Castagné, spokesperson for the Never Again collective.

An ecological-social front is formed to build the post

Strong signal, it is the first time that the CGT calls to walk for the climate. Philippe Martinez paraded in Paris alongside environmental organizations. This march demonstrated the capacity of the climate movement to build alliances and to make common demands with other movements: as with the collective Plus Never That, which joins the unions for the struggle of the Gonesse Triangle. These common demands are centered around the idea that climate and social justice are intrinsically linked and that social and ecological measures must therefore be put in place to build a sustainable future.

"Once again, the success of this march shows that the climate movement has become a major social movement in France, which has made it possible to democratize the climate issue in the whole of society" indicates Elodie Nace, spokesperson for Alternatiba. Indeed it has become one of the main concerns of the French, All categories. It is now time for these voices to unite to make themselves heard during the major events of the coming year.