The energy classification of French ski resorts: an avalanche of energy sieves under the threat of the rental ban 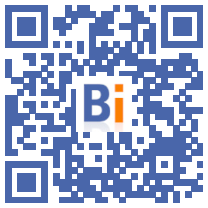 While the French ski resorts are in the opening period with the double problem of the lack of snow and the rising cost of energy, heero, a fintech specializing in energy renovation has established the ranking of 70 ski resorts in based on the energy performance of their homes.

The results are eloquent: with on average nearly 50% of accommodation considered to be energy sieves, against 16,9% on national average - and up to 90% in some of them - most ski resorts will be hit hard by the ban on renting from 2023 but especially in 2028. State of play of the situation.

Up to 90% F or G accommodation in certain ski resorts! 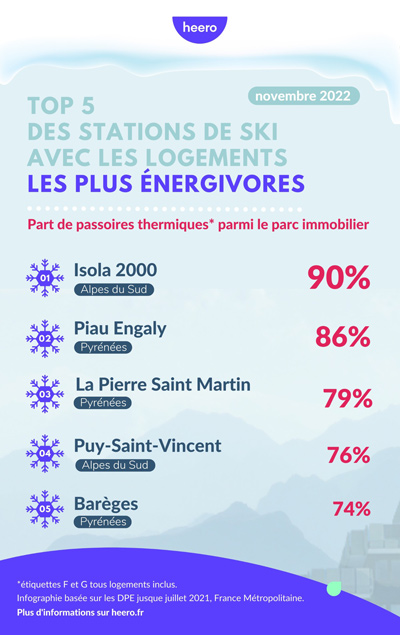 As the winter season is about to begin, Heero, a fintech specializing in support for energy renovation and the analysis of territorial data, has studied the energy performance of housing in 70 ski resorts, both in the Alps, the Massif Central , Vosges, Jura and Pyrenees (full classification attached). The finding is alarming. While in France, 16,9% of homes are considered energy sieves, the ski resorts studied have an average of 50% of homes with an energy performance diagnosis F or G! And in 30 resorts out of 70, more than half of the accommodations are energy sieves, with high differences depending on the massifs and the resorts: the share of energy-intensive accommodation thus goes from 15% to Bellefontaine in the Jura, the most economical resort in the ranking, 90% of housing considered as energy sieves in Isola 2000, yet in the Southern Alps!

For Romain Villain, CEO of heero: "The most energy-intensive ski resorts, those with more than half of energy sieves in their housing stock, are mainly located in the Pyrenees and the Alps, whereas, on the contrary, those with the lowest share of housing F or G, less than a third of the stock, are found more in the Vosges, the Jura and the Massif Central. Several factors are involved: the altitude, the geographical area, the age of construction of the buildings, with an ecological and economic impact to be expected in the years to come that is very different depending on the resorts and the massifs. » 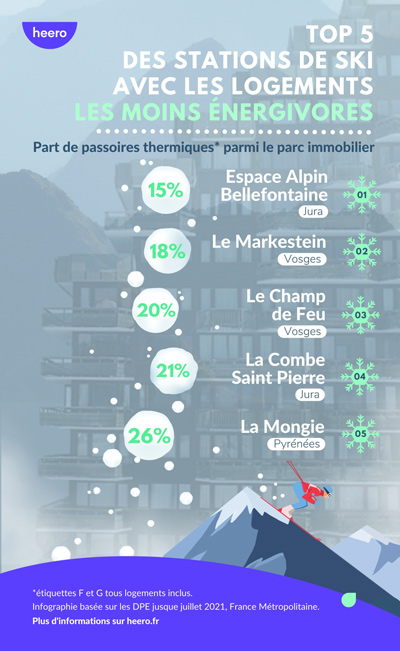 Courchevel 1850 was the first high-altitude resort built on a virgin site in 1. The major development phase of ski resorts then took place in the 1946s and 60s with the Snow Plan and the construction of ever higher resorts in altitude - such as La Plagne, Les Menuires, Les Arcs - mainly composed of apartments in residences built quickly, before the first thermal regulations, subject to harsher temperatures, with sometimes insufficient insulation and not always efficient heating systems. It was not until 70 that the first thermal regulations set the objective of reducing the energy consumption of new buildings by 1% by limiting heat loss, with in particular the imposition of the installation of a thin layer of thermal insulation and the installation of heating thermostats.

For Romain Villain: “The history of French winter sports resorts is made in several stages. First born from an existing village, the ski resorts have gradually industrialized to set up on virgin sites both to be closer to the ski area but also to be able to build more buildings, with a problematic more practical and aesthetic than energetic at that time. Today, many resorts built in the 70s find themselves faced with the need to maintain, or even massively renovate, their housing stock, which has become aging, otherwise they will no longer be able to rent it. »

It was from the 80s that we began to build lower resorts, better integrated into the landscape with chalets divided into apartments, often of better quality, and less energy-consuming compared to the ski resorts of the 70s.

But beyond the periods of construction and urbanization of the massifs, the differences according to the massifs are probably linked to altitudes. The Jura, the Vosges and the Massif Central are generally less subject to extreme conditions - both in terms of the climate currently used in the ECD but also at the time of construction, which is thus easier than in the Hautes Pyrénées for example , with potentially lower costs and therefore higher quality constructions or materials. The construction conditions and materials therefore have a strong impact beyond the age of the stations.

Note: the DPE calculation method can also have a significant impact on the poor energy performance of ski resorts. Indeed, the DPE measures energy consumption per m2. Studios and small apartments, very common in the mountains, are therefore more strongly penalized than large apartments, because they consume proportionally more energy in relation to their surface area, with the same heating equipment for example.

Soon fewer properties to rent in winter sports resorts: another economic difficulty they will have to face

For Romain Villain: “Basically, the Climate Law only concerned long-term rentals, but recently the Minister of Housing, Olivier Klein, indicated that vacation rentals and furnished tourist accommodation will also be affected, which will have a very negative impact for ski resorts which are likely to see their rental stock halve on average from 2028, i.e. in just 5 years! Because for some of them, it will be materially impossible to renovate all the housing concerned by then…”

Fortunately, some regions are already launching initiatives and aid to improve the performance of resorts. In Auvergne Rhône Alpes, for example, Laurent Wauquiez, the President of the Region, has set up a new plan for the mountains of 100 million euros, including 10 million euros devoted to the renovation of leisure buildings and holidays especially…

Renovating your property, a cost for owners of second homes or landlords, but the possibility of obtaining aid!

Contrary to popular belief that aid is often reserved for buyers of main residences, there are measures for second homes or investments but they are of course insufficient, even though these are the most constrained by the Climate Law and are in the front line to renovate properties in the coming years.

Some examples of quotes:

For Romain Villain: "It is certain that carrying out renovation work has a cost, and that in ski resorts certain work can be complicated by the altitude, by the existing architecture or by the size of the apartments, which are often already small, not necessarily allowing interior insulation. Some work will also have to be carried out at the level of the condominiums, particularly with regard to the heating system, and for this, an energy audit of the buildings is an essential prerequisite. »