The building materials market is regaining some momentum 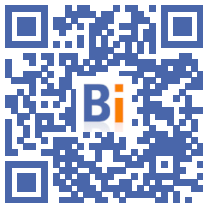 One year after the start of the first confinement, the building materials business has regained some momentum. At the start of 2021, although the comparison with 2020 is not favorable due to a high level of activity observed in January-February of last year, the volumes produced are within the long-term average, even at above with regard to the BPE.

Driven by an economic context which is rather well oriented on the building side, concrete production feeds structural work sites, the stock of which remains supported by delays and lengthy completion times due to the sanitary context; As for aggregates, activity is currently benefiting from a catching-up effect from the old public works sites, pending fuller order books, in particular with the implementation of the measures of the Recovery Plan. In either case, demand for materials currently lives on its achievements and remains dependent on the pace of execution of current books, on the building side, and the timing of arrival of new calls for tenders, on the public works side. 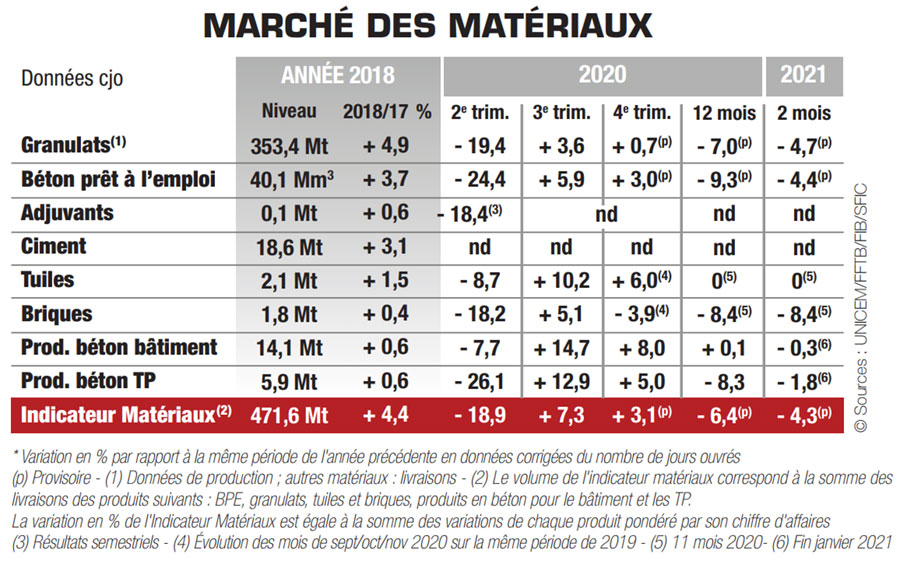 One month of February in the average

Cumulatively over the first two months of 2021, aggregate production fell -4,3% compared to last year while cumulatively over twelve rolling months, the decrease reached -8,5%. As for ready-mixed concrete, deliveries contracted by -6,5% compared to January and -6,2% over one year, but are 2% above the average production for a month of March over the last twenty years. Despite a good month of January there too, activity over the last quarter fell compared to September-November (-2,2%) but also, of course, compared to the same period of the year. past (-1,7%). Cumulative over two months, ready-mixed concrete production is down -4,2% over one year and -9,9% cumulatively over twelve months. in March, all year-on-year changes will be “boosted” by a base effect that has become very favorable, but for the time being, the materials indicator, provisional for February, has fallen by -4,2% over one year (CJO) after a drop of -6,4% over the whole of 2020.

The building "lives on its notebooks" still well stocked

For once, building contractors, interviewed in March by INSEE, confirmed their optimism for the coming months, even anticipating an improvement in activity. Their order books, still glued to more than 9 months in the shell, are even considered better filled than in February and the prospects for hiring better oriented. The sector's activity therefore seems for the moment fueled by a large stock of projects in progress or to be carried out, a legacy of a rebound in permits recorded before the onset of the health crisis. On the construction side, however, the latest housing starts figures, although often revised, show a significant decline, of -3,1% over the last three months, at the end of February, compared to the previous quarter. In total over one year, there are thus 351 housing units started (-900% over one year). On the permit side, the recovery that began in recent months seems to be running out of steam (+ 9,5% quarter on quarter at the end of February against + 0,5% at the end of January) and the trend over one year remains strongly downward (-16,8% with 17,4 authorizations), the collective segment being more impacted than that of the diffuse individual (-377% versus -000%). Finally, with regard to the non-residential sector, the situation remains worrying: the authorized areas (25,4 million m² year-to-date at the end of February) continue to deteriorate, falling by -9,5% over one year, a pace which seems to be accelerating over the last three months (-32,6%), with public or commercial buildings even posting drops close to -20,6%. As for the areas started, they plunged -21,5% over one year over the last three months and -25% over twelve months, the figures by type of work being often disturbed by the effects of delays collection and registration of large projects. Weakened by the economic consequences of the health crisis on households and businesses, the construction of housing (and premises) also seems to be hampered by political and regulatory blockages. 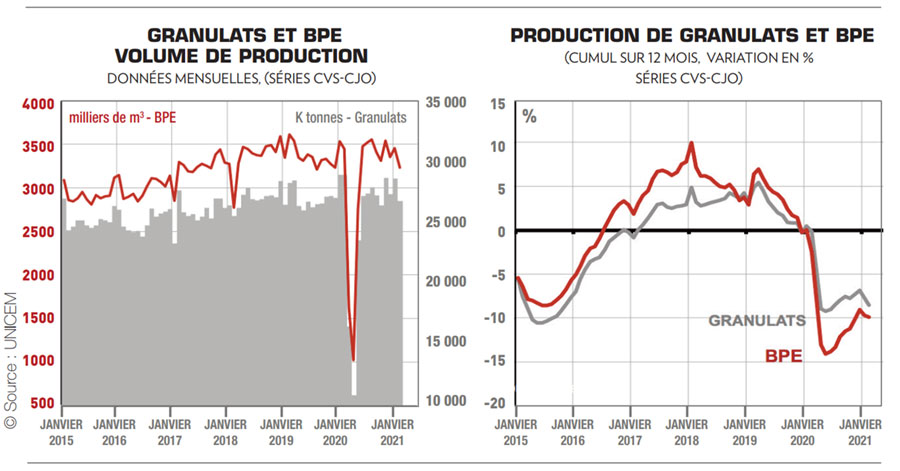 In a good number of communities, the issuance of permits appears to be slowed down or even seized up, sometimes causing a significant lengthening between the authorizations and the start of work (which can go up to 24 months in the collective). In addition, within the framework of the Climate and Resilience Law, the objective of combating “the artificialization of soils” now seems to dictate the land policy of contractors despite the economic and social needs of the various territories; and this, in a context where housing needs remain significant, where conditions of access to credit are set to tighten (application of the HCSF criteria in the summer of 2021) and where new property prices continue to tighten ( + 7,1% for houses since the end of 2019 and + 4,9% for apartments). And this real estate inflation could accelerate under the combined effect of a scarcity of supply from developers, new construction regulations (RE2020) and current pressures on the prices of materials (steel, plastics, non-ferrous metals, wood work ...). This news highlights the issue of the choice of materials in the construction mode. Concrete, available immediately, produced locally and little subject to the tensions of the international market, thus meets the requirements of controlling supply times and construction costs, key factors in access to housing.

The beginning of the year 2021 remains very sluggish in public works even if the risk of an expected air gap seems for the moment ruled out. According to the FNTP, the work carried out, down -10,4% in January over one year, is however returning to 2019 levels but annual invoices are down -14%. The very thin order books, however, shuddered in January (+ 5,9% over one year). But professionals are still waiting for a wake-up call for tenders, particularly in connection with the implementation of the Recovery Plan projects.

All in all, the demand for materials in 2021 will remain subject to strong uncertainties: on the BPE side, supplied by building books at least until the summer, it could vary from -2% to + 2% depending on the deadlines for execution and rate of depletion of permits. On the aggregates side, the evolution of the activity will depend, on that of the ready-mixed concrete construction site, of course, but also on the timing of the new construction sites and the Recovery Plan and would vary between 0 and + 4%, with a better second part of the year. oriented.