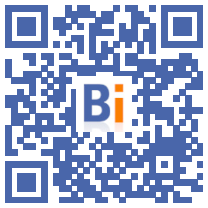 On Tuesday, September 14, the High Council for Financial Stability (HCSF) chose to translate into legally binding standards, the recommendations conditioning access to real estate credit for the French, i.e. 35% maximum debt and a maximum borrowing period of 25 years old (27 in the new).

This decision will be effective from January 1, 2022. The High Council thus intends to avoid a new boom in the mortgage market, as it had been observed in 2019 ... In a context of inevitable rise in credit rates, La Centrale de Financement warns of the harmful consequences that these normative measures will have on access to credit for first-time buyers and, more broadly, on areas of turbulence that the real estate market is likely to cross ...

By definitively ratifying the conditions for granting credit, the leeway left to borrowers is drastically reduced, and constrains access to credit for the first link in the chain of real estate acquisition: first-time buyers.

“To maintain the dynamism of the real estate market, the first possible adjustment variable could be loan rates. However, in this context of health crisis and economic instability, rates will inexorably increase. In any case, this is the most probable scenario with regard to the monetary policy envisaged by the FED, which provides for an increase in long rates, and whose decisions are always closely followed by the ECB ... La Centrale de Financement, we are considering an increase of around 0.40% in rates over all loan terms! ", says Sylvain Lefèvre, president of La Centrale de Financement. “In this context, to support access to the real estate market, all that remains is to adjust real estate prices downwards. Otherwise, it is the entire real estate market that risks freezing ... Indeed, if first-time buyers, the first link in the real estate credit chain, no longer have the possibility of being supported. , because of rates and prices of goods too high, the whole market is stalled! The property of aspiring second-home buyers will no longer sell and the real estate market will be blocked. "

With a 0.40% increase in lending rates, real estate prices are expected to decrease by around 5%!

According to La Centrale de Financement, in a context of rising lending rates, the HCSF's decision will inevitably have an impact on the prices of the real estate market in France.

The broker anticipates an increase of around 0.40% in rates over all loan terms. In order to concretely establish the impact of the non-derogatory measures of the HCSF, La Centrale starts from the average profile of the first-time buyer to draw up an inventory and establish his borrowing capacity before and after increase in credit rates.

Having the possibility of getting into debt up to 35% of his total income, the latter could claim a maximum reimbursement of € 1.208 per month. In this value, approximately 72 € would be dedicated to the reimbursement of borrower insurance (2 x 100% per head). The borrower would thus have a net repayment capacity of € 1.136 per month, excluding insurance (or € 13.632 per year).

Under the current borrowing conditions, a first-time buyer with an average repayment capacity of € 1.136 per month and taking out a 25-year loan at an average rate of 1,25%, will be able to claim a maximum loan amount. up to € 292.559, wherever it is in the territory.

With an average price per m2 of € 7.089 in Île-de-France (excluding intramural Paris), first-time buyers who take out a loan in the amount of € 292.559 will have the possibility of acquiring a property of approximately 41,27 m2.

In the provinces (here in the Nouvelle-Aquitaine region), where the average price per m2 is € 2.924, a first-time buyer will have the possibility of claiming a property of around 100 m2.

Starting from the assumption that the first-time buyer will focus on a property with a surface area similar to those mentioned above, in Ile-de-France as in the provinces: in the case of a hypothetical increase of 0,40% on all the rates and a repayment capacity of up to € 1.136 per month, a first-time buyer will have, at the rate of 1,65% (1,25% + 0,40%), the possibility of claiming to a loan (excluding insurance) up to a maximum of € 279.100 over 25 years, wherever it is located in France. The maximum loan amount that a first-time buyer could contract therefore decreases by € 13.459, or 4,6%.

“To acquire a property of a sufficient size, more particularly in a tight zone, first-time buyers will have no other choice but to wait for the fall in property prices. Conversely, sellers will have to adjust their prices to match buyers' borrowing capacities ... " adds Sylvain Lefèvre.

With a 0.40% increase in credit rates, the borrowing capacity of first-time buyers should drop by around 4.6% and lead to a fall in property prices of around 5%, primarily in tight areas. . The Centrale de Financement therefore calls for vigilance in the face of the turbulence that is looming for the real estate market. 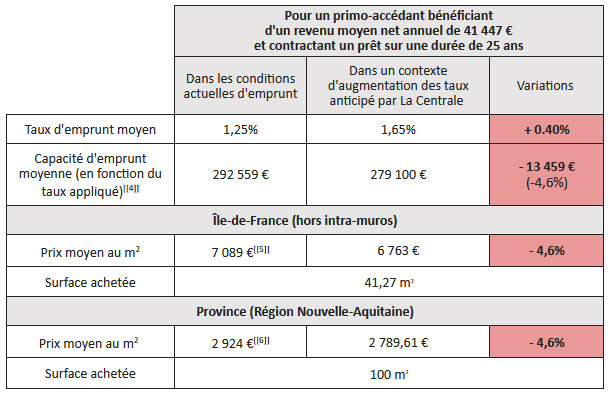