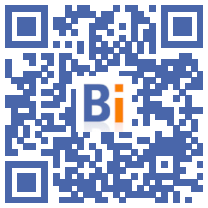 Fundimmo unveils the results of the semi-annual real estate crowdfunding barometer, carried out in collaboration with HelloCrowdfunding on 40 platforms *. After an increasing year in 2020 but marked by slowdowns linked to the Covid-19 epidemic, the market is regaining strong growth momentum. Catch-up effect or underlying trend? Overview of the main lessons.

“If we refer to the main figures and lessons learned from this new barometer, the real estate crowdfunding sector has experienced great momentum during this first semester, regaining that which was its own before the health crisis. Beyond the strong growth in fundraising, the main financial indicators show a stable average investment period and an average annual return still above 9%. The average funded project is on the rise and is gradually approaching one million euros, an increase that goes in the direction of history.

The platforms have demonstrated their ability to raise large sums in a very short period of time, in line with the expectations of larger real estate players and carrying out larger projects. Another positive sign, this increase in the size of projects is also accompanied by a larger number of operations financed, testifying to the installation of real estate crowdfunding in the landscape of real estate project financing tools for professionals. This semester was also marked by the merger between large banks and crowdfunding platforms to deploy joint financing offers. A new very encouraging signal on the recognition of real estate crowdfunding as a financing solution complementary to traditional bank loans. If the main market indicators are positive, it is nevertheless advisable to remain cautious in the analysis of all the figures. The second semester will provide answers to a few questions, and in particular the sustainability of this recovery when the health crisis is not yet completely behind us. Developers still sometimes have certain difficulties in launching new operations, with scarce and expensive land in certain areas and communities that sometimes struggle to grant the necessary authorizations. It will also be interesting to monitor in the months and years to come the impact of the crisis on the nature of the operations financed, whether in terms of location or taking into account of environmental criteria which are still significant for all market stakeholders ” analysis Jérémie Benmoussa, Chairman of the Management Board of Fundimmo. 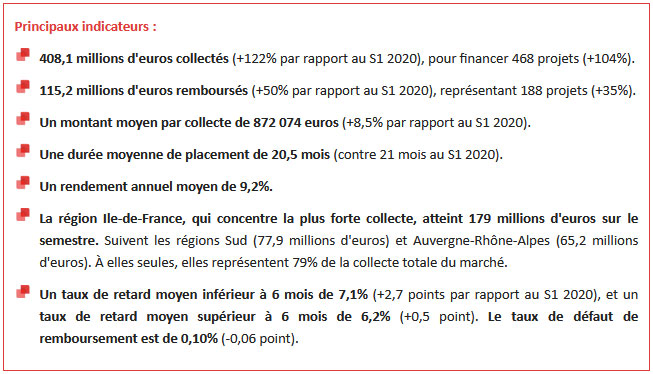 408,1 million euros collected over the first 6 months of 2021, i.e. more than double the amount invested in real estate crowdfunding compared to the same period last year (184 million euros). This record amount illustrates the dynamism of the sector during the first half of the year, as does the very strong growth in the number of real estate transactions financed (468 in total, up + 104%).

A product that continues to democratize

The average amount financed per project in H1 2021 was 872 euros, against 074 euros in H803 570. This 1% increase is explained by the growing use of real estate crowdfunding by larger operators, with larger scale projects. Projects between 2020 and 8,5 million euros represent 5% of total collection in the first half of 8, compared to 17% in 2021.

Based on data published by 40 platforms *, we see that investors are on average 302 per fundraising, with an average investment of 2.888 euros.

* out of the 40 platforms studied, 11 of them did not collect money and only made reimbursements

If Ile-de-France is still at the top of the regions having recorded the highest collections (179 million euros, up + 101% compared to H1 2020), it is a trio that stands out quite clearly in this ranking. The Southern Region (77,9 million euros) is in second position in the ranking thanks to a growth of + 419%, doubling the Auvergne-Rhône-Alpes region (65,2 million euros, + 179%). The significant increase recorded in the South region can be explained in particular by the financing of several large transactions involving luxury villas on the Mediterranean coast.

If they are further in the ranking, other regions have recorded rather spectacular increases in collection compared to the first half of 2020. This is particularly the case of Center-Val-de-Loire (collection multiplied by 15), Brittany (+ 136%) or Burgundy-Franche-Comté which went from 0 in H1 2020 to 3,6 million euros over the first 6 months of 2021. 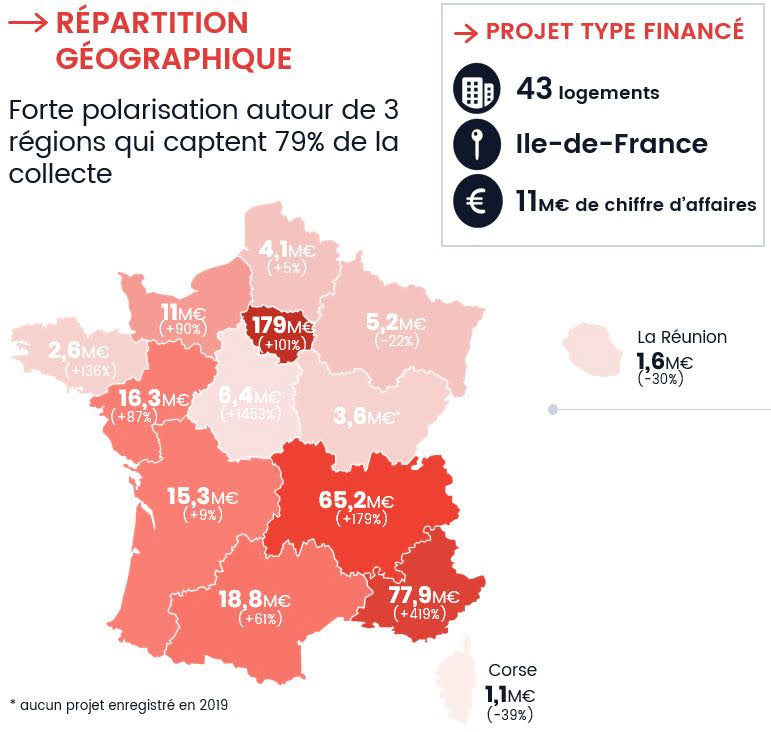 In 2020, the “average project” financed by real estate crowdfunding was a residential operation of 43 units in Ile-de-France, representing a turnover of around 11 million euros. 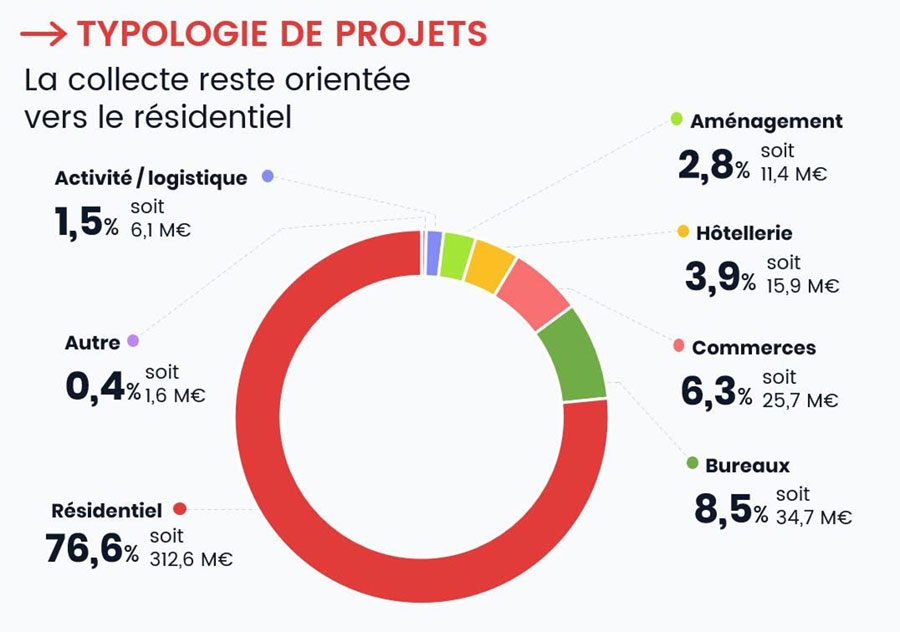 In a period marked by an extension of the duration of real estate transactions in connection with the health crisis, the ability of real estate crowdfunding platforms to raise large sums over very short periods is attracting more and more real estate professionals. Perceived advantages: the ability to generate new equity capital necessary for the launch of each new operation, and to continue to develop their activity without weighing on their cash flow. This is how 961 operators have been convinced by this method of financing since the creation of the market, including 181 new ones in the first half of 2021.

To date, the real estate crowdfunding market remains concentrated around 3 major platforms (including Fundimmo), which represent more than half of the total market inflow. Then follow 5 platforms of intermediate size which represent about 1/3. 13 platforms represent 15% of the market share, and 3 platforms less than 1%. The remaining platforms did not collect over the semester, only reimbursements.

As expected, following market lockdowns and slowdowns, the delay rate increases significantly for delays of less than 6 months, going from 4,4% for the year 2020 to 7,1% for this first semester and in a more controlled way for delays of more than 6 months (from 5,7 to 6,2%). However, these are averages that cover significant disparities; in detail, a few players are showing significant delays. It should be remembered that investors who experience these delays benefit from the corresponding additional interest.

The average default rate, calculated on the basis of projects having suffered a loss of capital and / or a loss of interest since 2012, is estimated at 0,10%, is down by 0,06 point compared to the year 2020. In a process of transparency, the HelloCrowdfunding project aggregator updates the data on the progress of the various projects every month, thus making it possible to identify overdue projects.