Promulgation of the Climate & Resilience law 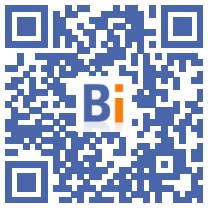 The last legislative step in a process that began two years ago with the establishment of a Citizen's Climate Convention, the Climate and Resilience Law was officially promulgated and published in the Official Journal on Tuesday, August 24, 2021.

This text marks a turning point for a society fully committed to the fight against climate change and the overconsumption of resources, for the benefit of the French. The law will make it possible in particular to improve the quality of the air in large cities, to consolidate the renovations of housing by supporting households, to fight against the concreteization of the grounds, or to integrate more vegetarian menus in the canteens.

Barbara Pompili, Minister for the Ecological Transition, declares: " Here we are ! After two years of intense work, the ecological transformation of our society will accelerate thanks to the Climate & Resilience law. With nearly 300 articles, it is a comprehensive and ambitious text that permanently anchors ecology in our development model. This text is part of a global action carried out since the beginning of the five-year term to be up to the ecological challenge and which has made it possible to reorient the way we travel, to heat ourselves, to manage our waste and to invest massively to decarbonize our economy. It also echoes France's international action to ensure that the Paris Agreement is respected everywhere. This law is the culmination of the unprecedented work of the members of the Citizen's Climate Convention, the Government and parliamentarians who have enriched the text during the various examinations. My entire ministry and I are now focused on the next step: taking the implementing decrees as quickly as possible to concretely translate the measures of the text into the daily lives of the French. " 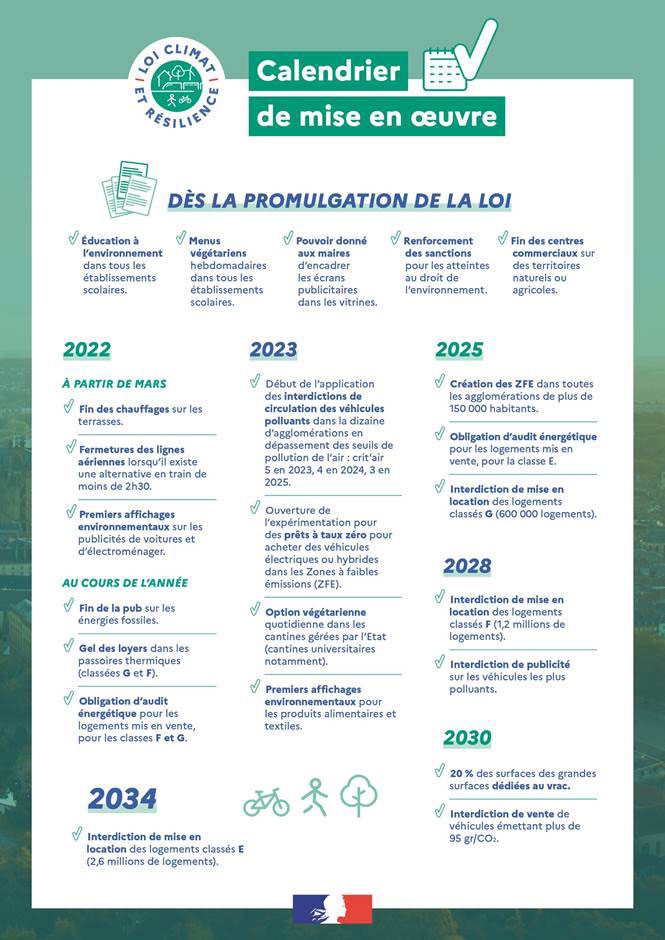 The environmental issue is a central social issue which implies understanding and mastering its fundamentals from school. 78% of French people also say that they do not have enough ecological information on what they consume.

Affirmation of the fundamental and continuous role of education for sustainable development, from primary to high school

A dedicated committee in each establishment will program environmental awareness activities, which will strengthen the projects of eco-delegates and discovery trips in the middle of nature, for example.

At the end of an experimentation phase, the display of the impact on the environment, in particular on the climate, of products and services will be standardized and compulsory.

Encouraging the overconsumption of polluting products is contradictory to the objectives of society's ecological transition.

The mayors will be able to regulate the illuminated advertisements located inside the windows, and visible from the street (regulation of the size, the space allocated, the hours of use ...).

Experimentation of the “Yes pub” in voluntary local authorities

Faced with the massive waste of paper, up to 15 voluntary local authorities will experiment for 36 months with the “Yes advertising” system: only households that have displayed this label on their letterbox will receive printed matter.

End of advertising for fossil fuels

Advertising for fossil fuels will be banned from the second half of 2022. From 2028, advertising for the most polluting vehicles will also be banned, two years before the end of their sale.

It will be mandatory to indicate the climate impact of products in advertisements, with immediate application in the automotive and household appliance sectors.

Less packaging in the lives of French people

It is estimated that the equivalent of a truck of plastic waste dumps every minute into the sea. Food packaging alone represents 820.000 tonnes of waste per year, or more than 12 kilos per French person.

In 10 years, supermarkets will have to organize themselves so that a fifth of their surface is dedicated to bulk. This ambition will automatically greatly reduce plastic waste and fundamentally change the habits of the French.

In 2020, renewable energies represented more than 25% of the electricity produced. France is targeting 40% in 2030.

The next PPE will formally define objectives for the production of renewable energies by citizen communities. The State will thus have to implement the necessary tools to support this production of green energy by and for all.

The obligation to install photovoltaics or green roofs during a construction, extension or major renovation will be extended to commercial areas with a lowering of the threshold to 500 m² of surface creation. It is also extended to office buildings of over 1 m² and to car parks of over 000m500.

Natural gas suppliers will have to integrate a portion of biogas into the gas they market.

Air pollution, mainly linked to nitrogen oxide particles, 70% of which are generated by the circulation of cars and in particular old diesel vehicles, is responsible for 40.000 deaths per year.

Implementation of low-emission mobility zones (ZFE-m) in metropolitan agglomerations with more than 150.000 inhabitants by December 31, 2024

All agglomerations of more than 150.000 inhabitants will have to set up an ZFE-m, ie 33 new ZFE-m. In the 10 metropolitan areas that regularly exceed air quality limit values, traffic bans for Crit'air 5 vehicles in 2023, Crit'air 4 in 2024 and Crit'Air 3 in 2025 will be automatically scheduled.

A zero-rate loan will be tested for two years, from 2023, to help the poorest households living in EPZs to finance their change of vehicle, in addition to aid (conversion bonus, ecological bonus, etc. ) already planned.

The sale of cars emitting more than 95 gCO2 / km will be banned in 2030, thus setting a path towards 2040. To be fully effective, this measure is also proposed by the European Commission as part of the Fit for 55.

Widening of the premium for conversion to electric bicycles

It will now be possible to scrap an old thermal vehicle and receive assistance for the purchase of an electrically assisted bicycle.

We sometimes fly for short distances, even when an alternative by train, less polluting and sometimes faster, exists.

Flights will be prohibited when there is an alternative by train in less than 2 hours, with the exception of flights mainly taken by connecting passengers to a more distant destination. Train-plane connections at airports will be made easier, like the recent combined tickets offered by SNCF and AirFrance.

4,8 million households live in poorly insulated housing and buildings are responsible for a quarter of the country's greenhouse gas emissions.

From 2023, owners of thermal strainers will be forced to carry out energy renovation work if they wish to increase the rent of their rental accommodation. This is an important first signal before the entry into force of the rental bans on the most energy-consuming homes.

Ban on the rental of less well-insulated housing

From 2025, it will be prohibited to rent the least well insulated thermal strainers (classified G label), and from 2028 for the rest of the strainers (classified F). And from 2034, it is classified E housing that will be banned for rental. These accommodations will thus gradually be considered indecent under the law. The tenant can then require his owner to carry out work and several information, incentive and control mechanisms will reinforce this right for the tenant.

Financing of the remainder of the charge

All households, even those with the lowest incomes, will have access to a financing mechanism to pay the remainder of their renovation work. In particular, this may take the form of loans guaranteed by the State.

Less concreteing of the land

Every 10 years, the equivalent of a department the size of Yvelines disappears under the concrete. Artificialization accelerates the loss of biodiversity, amplifies the risk of flooding, reinforces dependence on private cars.

Division by 2 of the rate of soil artificialization

The ban on the construction of new shopping centers, which would artificialize land without demonstrating their necessity according to a series of precise and binding criteria, will be the norm. No exception can be made for sales areas of more than 10.000 m2 and exemption requests for all projects with a sales area greater than 3.000 m2 will be examined by the Prefect.

Animal husbandry causes 14,5% of global greenhouse gas emissions and the import of meat contributes to deforestation in countries like Brazil.

Daily choice of a vegetarian menu in state and university canteens, weekly menu in school canteens and experimentation for volunteer communities

Following the experiment provided for by the Egalim law, school canteens will now have to offer a vegetarian menu at least once a week.

State and university canteens which already offer several menus will have to offer a vegetarian option from January 1, 2023.

Volunteer communities will be able to experiment with the daily vegetarian menu and thus enrich the assessment that will be conducted by the State.

Strengthening judicial protection of the environment

Creation of an offense of endangering the environment

From now on, the fact of having exposed the environment to a risk of lasting degradation of fauna, flora or water by violating an obligation of safety or prudence may be punished with 3 years in prison and € 250.000 in 'fine. Unlike the general offense of pollution, penalties may apply if the behavior is dangerous and the pollution has not taken place.

General offense of environmental pollution (flora, fauna and air, soil or water quality) and ecocide offense for the most serious cases