Evolution of new property prices on the French coast 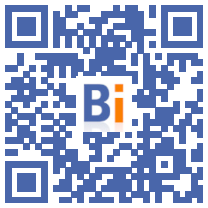 From Brittany to Corsica, the most dynamic seaside resorts in terms of new construction, show an overall upward trend in new prices. All boosted by strong demand, which was even reinforced by the health crisis, they are still penalized by too low a supply. Overview.

Budgets for buying new housing on the French coast tend to increase overall in a year. While there are of course still opportunities to be seized, new seaside real estate has never been so weakened by the lack of supply.

6 increases for 4 decreases in the 10 cities of our selection of the most active tourist localities in new housing for all of the French coasts, from Saint-Malo to Porticcio. But beyond these 10 evolutions, the tendency is to progress.

Example in the Var: prices are increasing in two-thirds of the coastal municipalities affected by new programs, such as Six-Fours-les-Plages where the price of three-room apartments, the reference area of ​​this barometer, climbs by almost + 5 % to 285.000 €. Among the Var exceptions, Saint-Raphaël where the price fell by -6% to 356.000 €. Ditto in Hyères where the cost of a T3 drops back below the € 300.000 mark, decreasing by almost -3%.

The tourist attraction of the French coast cannot be denied. The prices of new real estate by the sea are increasing whatever the region, from Brittany to Corsica. Illustrations with the two strongest increases in this barometer on the Atlantic coast: + 11,8 % in Biscarrosse in the Landes and + 11,35 % in La Rochelle. Count € 263.500 for a T3 in Biscarrosse. 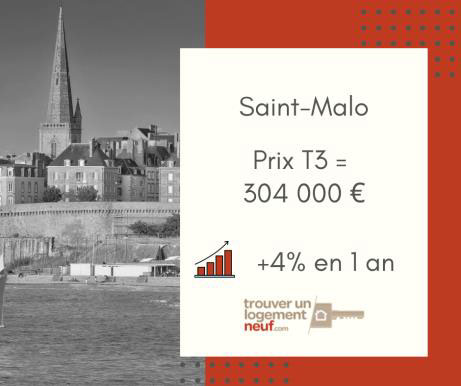 The increase also concerns Breton municipalities: Saint-Malo: + 4 % at € 304.000 per T3 on average. Saint-Malo where the price of new has soared in recent years since it was necessary to pay less than € 250.000 in June 2018 to acquire a three-room apartment in a new development.

The French coastline penalized by the lack of supply

As elsewhere in France, new real estate by the sea is penalized by the lack of supply. Building permits fall by 15% in one year in the collective at the end of April, sales have fallen by a third in 2020 and it is therefore the marketed offer that is declining.

“The more the territories are valued, such as the French coast, the more land is lacking and the more difficult it is for real estate developers to get out of operations. All the more so when certain new municipal teams have been elected to limit new real estate programs ”, explains Céline Coletto, spokesperson for Find-un-logement-neuf.com.

There are sometimes only a few new programs per seaside resort. Certain types of new housing are no longer even available.

These most expensive tourist cities in France

As some localities therefore do not display enough new programs to establish relevant averages, it is La Baule-Escoublac which becomes the most expensive tourist town in this 2021 barometer with a price approaching € 530.000 per Q3, + 3,5 % in one year. Some three-room apartments are approaching a million euros. 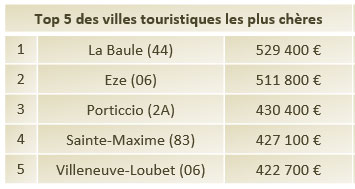 While new programs in Saint-Tropez are almost non-existent, the pressure is exerted at neighboring Sainte-Maxime, in the Var. For a long time the most expensive tourist town in this barometer, the average price of a three-room apartment has settled down while remaining in this top 5. There are still houses at 3,3 and even 5 million euros. currently on the market.

The localities of the Alpes-Maritimes such as Eze and Corsica such as Porticcio are among the most expensive on the French coast. Conversely, among the most affordable seaside towns, Sète, Cap d'Agde and La Seyne-sur-Mer offer prices under € 250.000 for a three-room apartment.

La Rochelle, seaside resort of Poitou-Charentes, is one of the top 10 searches by locality, ahead of Nice, Rouen and even Paris… on the Find-un-logement-neuf.com portal. 2h30 from Paris by train, the prefecture of Charente-Maritime seems to be popular for combining quality of life, seaside and why not teleworking.

Proof of this appeal, despite nearly 30 new programs being marketed, the price of new real estate in La Rochelle has continued to climb in a year of + 11 % to reach € 307.000 for a three-room apartment.

"Like La Rochelle or Saint-Malo, some towns on the French coast offer possibilities for acquiring a second home in which to come and work from home one or two days a week, side by side with the weekend", reports Céline Coletto from Find-un-logement-neuf.com. 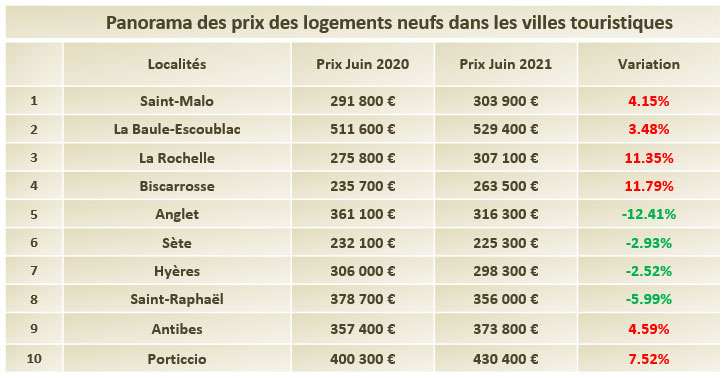 Good plans to invest by the sea

While some tourist cities have seen their prices rise sharply over the years, others currently offer great opportunities to invest in new real estate by the sea.

Faced with the few new programs on sale in Biarritz and prices which increase when there is still availability, new housing in Anglet, a neighboring municipality, is more affordable and even benefits from the sharpest drop in our selection: -12% in one year, to € 316.300.

Even inside popular seaside resorts, it is also possible to find new, cheaper programs. In La Baule, the most expensive town in this barometer, you can still find a T3 at 205.000 €. 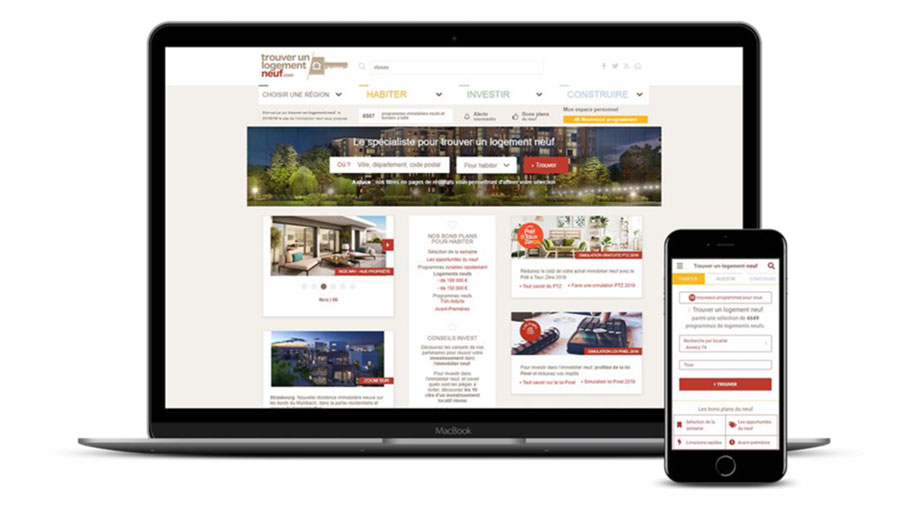 Although the offer is increasingly scarce in popular tourist towns along the coast, resulting in significantly higher prices, there are great opportunities to be seized to invest in emblematic seaside resorts. Some will also be the opportunity to combine investment in pleasure, regained quality of life and teleworking as in La Rochelle.

The current average price of new real estate in French coastal tourist towns was calculated on Tuesday, June 1, 2021 for the reference area of ​​a three-room apartment, according to the prices indicated each day by the advertisers of the Find-un site. -logement-neuf.com: on a minimum basis of 3 different new real estate programs for each locality, ie several dozen prices of new housing compared.