Pressure from all sides on new property prices in France 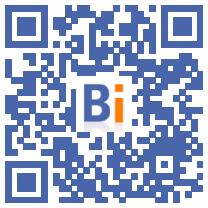 This start of the 2022 school year once again shows the pressure exerted on the prices of new real estate in France; however, at the same time, the stone is still the symbol of a safe haven.

Indeed, despite this general increase in prices observed by the portal Find-un-logement-neuf.com, specialist in new real estate, the appetite for new apartments, in particular to invest, is not denied, with a renewed of interest to large cities.

150 cities had at least five new programs on sale at the start of 2021, then there were 141 in September 2021, and there are only 127 precisely one year later. Confirmation therefore that the supply of new housing continues to dry up everywhere in France, according to data from the site dedicated to new real estate, Find-un-logement-neuf.com.

This continuous decline in supply since 2018 is one of the factors affecting the rise in new property prices. It is now 4 out of 5 cities, compared to 3 out of 4 a year ago, which show price increases for three-room apartments, the benchmark typology for this barometer. Less than thirty cities recorded a decline in prices in September 2022. The downward changes were also less significant than for the increases.

An increase equivalent to inflation?

The average price of a three-room apartment has thus increased by + 3,56% in six months, for inflation over one year of + 6,5% at the end of August, according to INSEE. In this new school year 2022, it is therefore necessary to count on average 315.560 € to buy a three-room apartment in the new in France. This represents approximately €10.000 more than six months ago for a 3-bedroom apartment, a reference area in real estate development.

For Céline Coletto, spokesperson for Find-un-logement-neuf.com: “The new housing market is under pressure from all sides, which is undoubtedly reflected in prices. The supply which is still struggling to recover and the energy crisis, shortages of materials, lack of manpower... can only weigh on construction costs and therefore on the final price of new apartments. »

In detail, this translates into price increases of up to +41% in Anglet.

Strong pressure on the BAB

After Bayonne at the start of the 2021 school year, it is another city in the famous Pyrénées-Atlantiques conurbation, Bayonne/Anglet/Biarritz = BAB, to become the city where the prices of new buildings have increased the most over the last six months. Indeed, Anglet shows the strongest progression of this barometer: + 41% in six months to €503.000 for a three-room apartment on average. An average sale price of a T3 which brings the locality into the Top 3 of the most expensive cities in France. However, the Basque city has about fifteen new programs for sale on the portal, but only two real estate programs offer average prices below 400.000 € per T3.

Paris, the most wanted city

After strong increases last year at the same period, some large cities are still making their comeback among the strongest decreases: Lille, but also Nice, Lyon, Reims, La Rochelle... Even Paris shows an average price of three-room apartments down slightly in recent months. As a reminder, in September 2021, the average price in the capital was almost €856.000 for a three-room apartment. This represents a drop of approximately -2,7% in one year, or €23.000 less in twelve months.

Is it this fall in prices that explains the return of the capital to the top of the cities most searched for by Internet users on the portal Find-un-logement-neuf.com in recent months? In any case, with an increase in Q3 of almost + 12%, in six months, Toulouse, the cradle of rental investment, is abandoning its pole position. It is even overtaken by Lille, which is benefiting from a sharp drop in prices: - 8% to €300.000 in Q3. These large cities may be benefiting from the revival of requests dedicated to investment, which again climbed by 2,5 points in one year on the portal dedicated to new housing.

Unpublished: a municipality of 93 among the most expensive cities in France

Among the most expensive cities in France, behind Paris, we are used to finding only cities in Hauts-de-Seine. However, this start of the 2022 school year changes the situation. If Anglet is thus placed in third position, it is also necessary to note the arrival, for the first time, of a commune of Seine-Saint-Denis in this classification. Indeed, with the Altosequanese localities of Boulogne-Billancourt and Rueil Malmaison, it is Saint-Ouen-sur-Seine in the 93 which monopolizes this Top 5 with an average price of €478.200 for a three-room apartment, despite a drop of almost - 4% in six months.

Among the Top 5 of the most accessible towns to buy a new home, we should note the arrival of La Roche-sur-Yon in Vendée on the podium due to the largest drop in prices recorded in the last six months: - 14% to €201.000 for Q3. Pau and Perpignan are the only two municipalities to manage to offer a three-room apartment at less than €200.000 on average. Note the price difference between Anglet and Pau, two towns in the same department of Pyrénées-Atlantiques about a hundred kilometers from each other. You can thus buy 2,5 new apartments in Pau for the price of just one in Anglet. 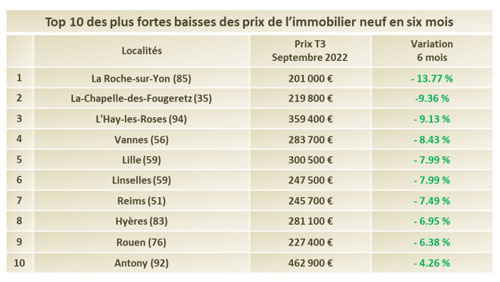 The implications of ZAN, Zero Net Artificialisation and the lack of land that should result from it, the consequences of the entry into force of the new environmental regulations, RE 2020, which will be reflected in the prices of future new programs soon to be marketed are elements that will further weigh on the costs of becoming a new owner. All in a context of rising interest rates. So what about the evolution of sales? 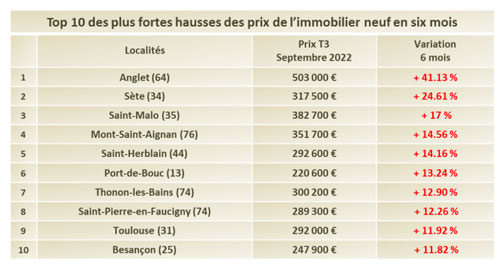 As the Pinel law will undergo a reframing from January 1, 2023, one could imagine a resumption of sales to investors at the end of the year: but for the time being, second quarter sales are still down by more than 20 % compared to the pre-Covid period, according to ministry figures.

a real-time calculation method The current average price of new real estate in France was calculated on Monday September 12, 2022 for a new three-room apartment, according to the prices indicated each day by advertisers on the Find-a- housing-neuf.com: on a minimum basis of 5 different new real estate programs for each locality, i.e. several dozen new housing prices compared.