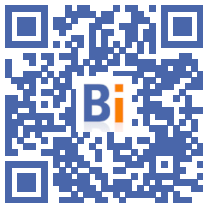 The 7th Barometer 2021 Monexpert-renovation-energie.fr carried out with OpinionWay shows that energy renovation is an increasingly strong concern for the French, overwhelmingly convinced that the issue must be part of the program of presidential candidates.

Despite this strong interest, the French remain lost in the face of the complexity of the signage of aid and have a budget that is lower than in 2020 to finance the work in their housing. To facilitate their procedures, they favor support through a single service provider and, as a prerequisite, the energy audit of their home.

In a context of recovery, the latest OpinionWay / Monexpert-renovation-energie.fr barometer is rich in information on the perception of new support measures for energy renovation which are intended to massify and accelerate the work: despite their growing need to thermally renovate their homes and a better knowledge of environmental issues, the French are still hampered in their projects by the complexity of administrative procedures and the maquis of aid.

Despite a significant energy bill, more than a third of French people say they are cold in their home

While they declare an average monthly energy bill of 184 €, the French are 20% to pay more than 200 € of heating bill per month. Note that 18-24 year olds and 65 and over are the most impacted with respectively 202 euros of average monthly budget and 227 euros. This substantial energy budget has a real impact on the purchasing power of the French. As such, two out of three French people (66%) are ready to carry out renovation work in order to have a lower energy bill. Two thirds also wish to carry out this work to have more comfort in their housing (64%).

In fact, more than a third of the population (36%) say they feel cold in their home at least from time to time during the winter. Unsurprisingly, tenants seem to suffer more from the effects of their accommodation in terms of temperature: half of them (50%) say they feel cold in their accommodation at least once in a while during the winter, including 18% often ( against 28% of owners, including 5% often). 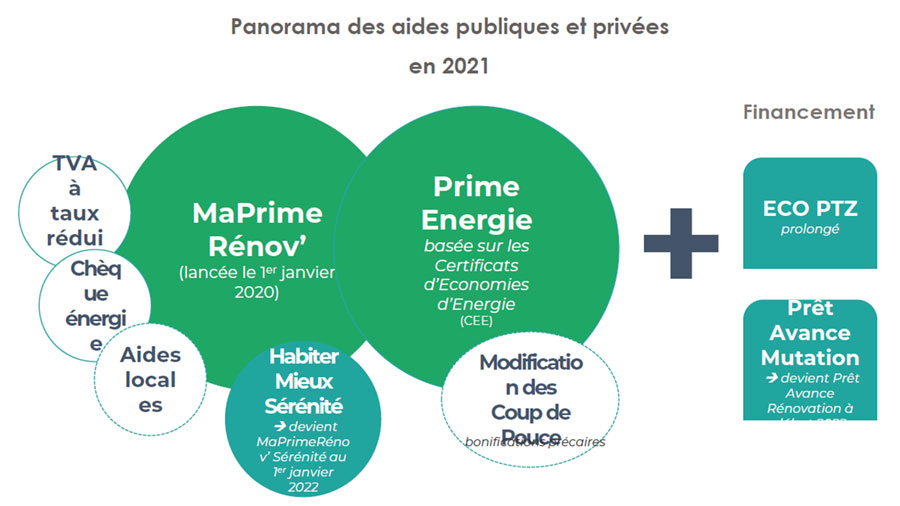 Also, many (1 in 2 French people, or 48%) consider it necessary to carry out energy work in their home and they would even like it to be compulsory (52%). Because, they are aware that this brings real value to housing: for almost

8 out of 10 French people, the energy label of the home visited would be an important criterion in their purchase plan (76%) and for 33%, a good energy label allows easy resale.

However, 2 out of 3 French people (66%) are unable to cite financial assistance allowing renovation work to be carried out despite massive communication from public authorities and private actors. And yet the financial stakes are central for people considering this type of work: one in three people who hesitate to carry out at least one type of work considers that they do not have the financial means (34%). The fact of not being entitled to aid for renovation comes second (26%) of the hesitations.

If the energy label is an important criterion during a purchase project, nearly 2 in 3 French people (58%) do not know which energy label is assigned to their home and the energy renovation is not even perceived spontaneously. as having a link with the reduction of the invoice. Tenants, generally having less room for maneuver in terms of work, are the most likely to not know the level of energy performance of their home: 64% against 52% of owners.

Thus, for those who have done or are considering work, the change of windows and insulation of the attic (both at 17%) and the change of the heating system (14%) arrive on the podium.

Regarding the work planned for the coming years, more ambitious and costly types of work are cited: the change of heating system is in first place (21%), followed by the insulation of the walls (19%) and installing solar panels and changing windows (both at 18%). 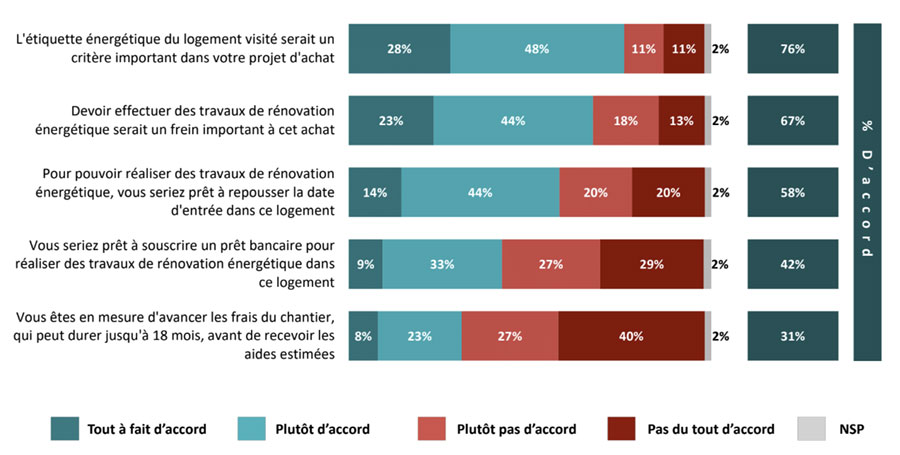 The reason for the obstacles to renovation today: the budget and the lack of support

The main brake for 1 in 2 French people is money. With an average budget of 2.546 euros, this is an amount down 525 euros compared to the previous wave (3.071 euros in 2020) and still insufficient to carry out effective work. This decrease should however be put into perspective because the budget remains higher than that recorded in 2019 of € 80. The year 2020 was a special year because of the confinements which allowed many French people to save money and have more time to devote to this work.

There is a significant difference between owners and tenants: the average budget envisaged by owners (€ 3.451) is more than three times higher than that of tenants (€ 1.121).

Apart from the issue of room for maneuver for the work, it is also easier to plan this type of long-term investment for homeowners. On this point too, we can observe strong budgetary disparities between the regions concerning the average budget, ranging from € 1.751 in the Center region to € 3.558 in the Grand Est.

In addition to the budgetary brake, there is the lack of technical support and the lack of trusted craftsmen, both put forward by 25% of the French. 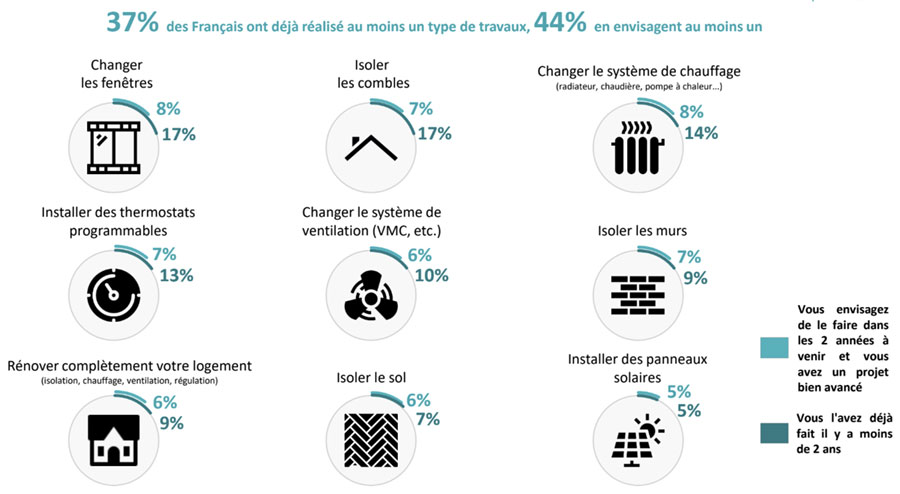 The French favor the audit of their accommodation and support via a single service provider.

To overcome these obstacles, more than 2 in 3 French people who are considering work (71%) say they are interested in an audit of their home, if only out of curiosity for 43%. A real plebiscite of the energy diagnosis of housing which falls within the logic of support from A to Z already widely expressed in previous waves.

To do this, in order to facilitate the procedures and simplify the work, a solution is widely emerging: allowing the French to rely on a single point of contact before, during and after their project. Indeed, nearly three French people considering a renovation in four could entrust the management of their renovation to a single service provider who would take care of setting up the project, monitoring it and carrying out the procedures for obtaining aid for renovation.

Energy renovation must be at the heart of the presidential debate

In this context, 2 out of 3 French people (63%) claim that the theme of energy renovation has its place in the debate on the presidential elections. Remember that in addition to the energy savings it allows, energy renovation improves thermal comfort inside homes, but also better air quality and therefore better health and better morale for its occupants.

In conclusion, in order to convince more French people to carry out energy renovation work, Monexpert calls on the public authorities to systematize the use of audits at a reasonable cost. Helped in part by MaPrimeRénov 'for certain households, the energy audit must also be helped by the Energy Saving Certificates system, which allows this accumulation to have an incentive charge. Also this remaining charge must be modulated according to the performance of work to help the most committed.

It is necessary to massify, but in an efficient and continuous manner. And for that, upgrading aid is imperative to encourage and help the French to take action.