Fourth phase of restoration work on the spire of Rouen cathedral 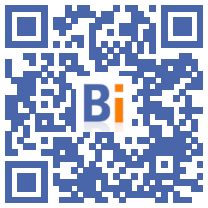 The restoration of the spire of Rouen Cathedral is continuing at a steady pace. As part of this prestigious and technical project, which since early 2016 has provided for the installation of a scaffolding solution on the spire of Rouen cathedral to allow its renovation, Tubesca-Comabi, French leader in manufacturing and marketing solutions for access and work at height, begins the fourth phase of the seven initially planned.

While the first three stages of the site have been completed, the scaffolding, which so far peaked at 85 meters, will be able to reach 102 meters in height. 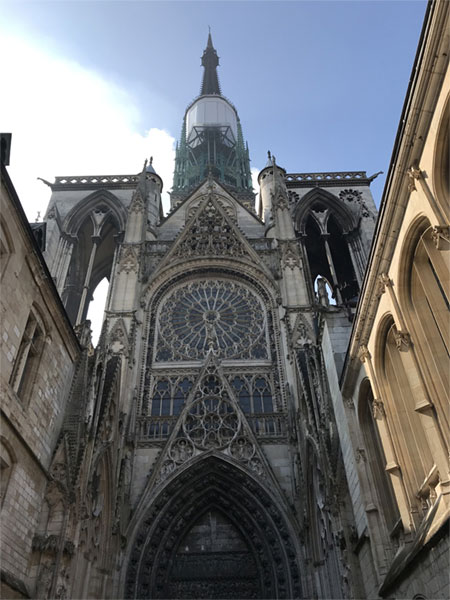 Phase number 4 of the site is launched

This project is a real challenge for the teams present on site and who are working on the highest listed historical monument in France.

As part of this new stage, the elevator, giving access to the scaffolding and put into service until today at 65 meters, will now allow to go up to 85 meters. It is also planned to remove the scaffolding of phase 3 to make the simultaneous assembly of phase 4, thus going from 85 meters to 102 meters. In addition, as on the outside, the scaffolding will also be installed inside at 85 meters.

As planned since the start of the work, the scaffolding was covered with a thermoformed tarpaulin in order to protect the fillings and allow working in complete safety during bad weather. A real technical feat, this dressing becomes necessary especially at such an altitude and in a region like Normandy. 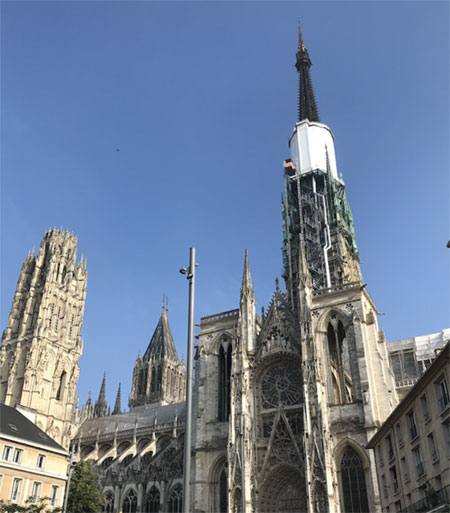 An emblematic monument of French heritage, Rouen Cathedral has been the subject of restoration work since 2015 on the initiative of the DRAC of Haute-Normandie. Since 2016, work has focused on the spire of the building with the aim of renovating the two materials that make it up: Corten® steel and cast iron.

As a reminder in 2016, TUBESCA-COMABI and Lanfry, a freestone company, responded as a joint and solidarity group and were selected, for the design and installation of a suspended foot scaffolding, because of their technical expertise. historic monuments and extraordinary sites.

For the restoration of this atypical site, with its complex and asymmetrical architecture, the scaffolding solution chosen by TUBESCA-COMABI is the multidirectional M368 (in 8 positions). It is a 100% standard product that meets the constraints of the geometric and architectural shapes of the building. However, the tailor-made assembly solution makes all the specificity, technicality and peculiarity of this site.

Focus on the multidirectional M368 of the spire of Rouen cathedral: