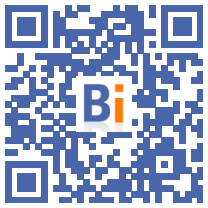 Successive confinements have accelerated real estate projects, and have also redefined them. This dynamic is driven by several phenomena which add up: persistence of teleworking, territorial rebalancing and still low interest rates.

A concordance of trends that makes city dwellers want to move away from city centers to acquire more square meters, or even buy a second home. Medium-sized cities are taking full advantage of this boom and seeing their prices take off with the arrival of new inhabitants with higher purchasing power. The improvement is such that the volume of transactions observed within the Laforêt network could well dethrone that, however record, of 2019. Finally, if first-time buyers are still in the race, the consequences of a weak supply combined with a strong demand could reduce their influence on the old real estate market.

Demand in old real estate accelerates very strongly in the first half of 2021 compared to the same period last year, and continuously since January. Thus, it reached + 30% nationally. Real estate retains its role as a safe haven in a troubled context.

Unsurprisingly, demand for houses is clearly progressing (+ 39%), while the increase in apartments is more moderate (+ 19%). Here again, the preference goes to large areas and outdoors.

Paris is recovering with a 21% increase in demand. At the time of the recovery, the "disinterest" for the capital, resulting from the first confinement, already seems far away and the city is regaining its attractiveness. In Île-de-France (+ 24%), houses with gardens and large apartments with terraces, balconies or outside are taken by storm, even if to find happiness, you must now go from the first to the second ring .

Already strong in 2020, demand in the regions (+ 33%) is mainly concentrated in medium-sized towns and on the outskirts of large conurbations. The purchase of second or semi-main residences energizes the regions thanks, in particular, to the sustainable introduction of teleworking in many companies.

An offer under ever stronger pressure: -19%

In the first half of 1, the supply, that is to say the goods available on the market, continues to dry up nationally (-2021%). Without being called into question, many sales projects were suspended due to insufficient visibility. However, this situation is far from homogeneous across the country. 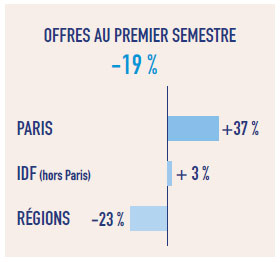 Indeed, if the regions show a 23% drop in supply, Paris has seen its stock rebuild (+ 37%). This trend must nevertheless be put into perspective, since since 2019 and even a little before, the volume of property for sale was historically low.

In Île-de-France, the return in comfort sales allows the offer to remain positive (+ 3%). Ile-de-France residents sell in order to buy larger or better, which allows for a more balanced turnover. Finally, the most attractive cities are seeing their stocks melt at high speed, especially on houses (-30%).

A volume of transactions still on the rise

The first half of 2021 obviously cannot be compared rigorously to that of 2020, which had experienced a sudden stop in real estate activity between March and May, with the impossibility of showing the properties. Logically, the volume of transactions is therefore more favorable (+ 41%). However, if we compare it to the first half of 2019, it is also on an upward trend (+ 7%), which suggests another record year. 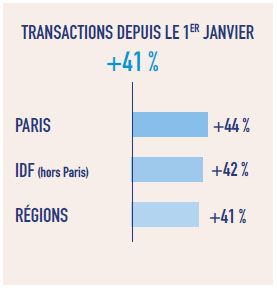 Sales of houses are accelerating (+ 45%), while those of apartments are up 39% compared to the first half of 2020. Paris is back to positive activity: + 44% increase in transaction volumes, while the Île-de -France is continuing its good momentum (+ 42%). The regions are also benefiting fully from this strong recovery (+ 41%).

While the majority of transactions still concern the main residence, rental investment now represents 27% of acquisitions. Another significant phenomenon: second homes represented more than 6% of transactions in the first half of 2021.

Except in Paris, prices rise: + 4,4% nationally 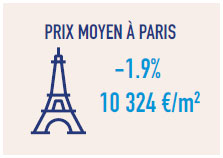 Reflecting a very strong increase in demand and a supply which is not managing to recover, prices are increasing everywhere (+ 4,4% nationally), except in Paris (-1,9%) where it is amounts to 10 euros / m². Here again, this is a relative decrease, the square meter having exceeded 324 euros everywhere in the capital, with the exception of the 10th and 000th arrondissements.

The scarcity of supply in the region, too, automatically pushes up prices (+ 6,1%), especially since new arrivals often have significant purchasing power. Finally, in Île-de-France, where Parisians migrate to find space, again prices are taking off: + 5%.

A sale time that drops by 2 weeks!

As a logical consequence of an extremely tight market, sales times are reduced, dropping below the 3-month mark in the regions to 85 days, ie 18 days less compared to the first half of 1. Buyers are less selective and sacrifice a few criteria, fearing soaring prices and constrained by the scarcity of supply.

If the national average is 80 days, or 2 weeks less than last year, Paris goes back 4 days to 76 days, while Île-de-France drops to 65 days: never -seen !

In such a dynamic market, the time is not really for trading. Thus, if the difference is 4,5% nationally between the sale price and the purchase price, it is only 3,05% in the capital. In Île-de-France, it even falls to 2,9%, while it reaches 4,80% in the region. The offers to purchase are often made at the displayed price and are sometimes multiple for the same good. So the seller sometimes has the luxury of choosing the best deal.

Conclusion of Yann Jéhanno, President of the Laforêt network 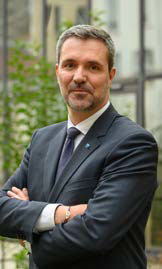 While the lack of goods available for sale continues to strain the market, it remains very dynamic in terms of transaction volumes. The risk of a rise in interest rates linked to possible inflation cannot however be ruled out. This is undoubtedly one of the reasons that lead buyers not to delay their decision-making too much.

In addition, lifestyles have been disrupted in a lasting way because of the magnitude and duration of the health crisis and its effects. The generalization of teleworking and the rise of entrepreneurship are now generating desires for elsewhere, accentuated by the rise in real estate prices in the city centers of large agglomerations, which make these sectors difficult to access. for first-time buyers.

Secondary or semi-main residences are back on trend

The impact of the health crisis on the choice of location and the format of its future accommodation is particularly noticeable at the start of the year. The search for spacious housing, even in municipalities far from economic centers, favors real estate transactions and in particular the sale of houses, which are particularly sought after. At the same time, the banks remain accommodating, fully playing their role of financier. On this date, our indicators suggest that we are heading for another record year! " concludes Yann Jéhanno, president of the Laforêt network.