Climate, demographic and energy crises: how does each country redefine its priorities to build the city of tomorrow? 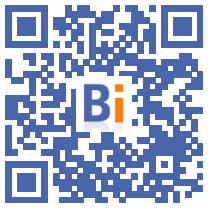 According to the UN, nearly 70% of the world's population will live in cities by 2050 compared to 55% today. An architectural, economic and social challenge which, combined with the energy crisis, requires, in many countries, to rethink the way of looking at construction and designing the housing and offices of tomorrow.

If in France, the construction sector has already begun its own transformation, what about other European countries and across the Atlantic? How do they view these challenges? What are their priorities and best practices in construction and housing to shape the city of tomorrow?

To answer these questions, PlanRadar, a European platform for digitizing construction and real estate projects in the Cloud, studied the main construction trends in 12 countries* in Europe, North America and the Middle East. The company today delivers the results of the first part of its three-part survey, entitled “Architecture of the future”, and reveals the main similarities and differences observed between countries in the construction sector. The other two chapters will concern the housing and offices of tomorrow.

Making construction more sustainable and resilient: an objective shared by a majority of countries

Worldwide, almost 2/5 of CO2 emissions are emitted by the building sector (construction, use and demolition). According to the PlanRadar survey, most of the countries studied consider the environmental issue as a driving trend for the future of the sector. Thus all the countries, with the exception of the United States and Hungary, believe that achieving carbon neutrality in the housing sector is a priority lever. To achieve this, they mainly bet on reducing CO2 emissions during the construction process and believe, to a lesser extent, in accelerating the integration of renewable energies in buildings through the installation of solar panels or geothermal heat pumps. 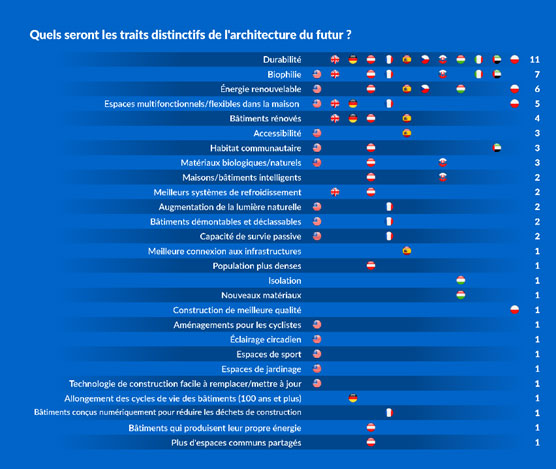 On the side of urbanization, in 10 out of 12 countries, architects consider the development of pedestrianization in the heart of cities as a strong trend and see the installation of local infrastructure as an effective measure to reduce the use of car, following the example of the "quarter-hour" city concept studied by many capitals.

Only Poland and the United States do not seem to consider walkability as a good practice to make urbanization more sustainable. In the United States, it could be a simple question of feasibility: most cities in the country were historically designed for the use of the car. Thus, ease of access on foot is often not a realistic option given their pre-existing layout.

While most countries have become aware of the urgency of working to reduce the sector's carbon impact, the solutions identified by each country with a view to achieving it are different.

…but different ways to get there

In the face of climate change, 5 out of 12 countries (US, UK, Germany, France and Italy) consider the resilience of the construction sector as a priority trend. This choice can be explained in particular by the geographical position of these countries, which makes them more vulnerable to natural disasters. These countries therefore recommend integrating new buildings more into their environment (optimizing the orientation of the habitat, use of natural light) while considering its potential risks.

This resilience also involves, for 6 of them (United States, United Kingdom, Germany, Austria, France, Spain, Czech Republic), the rehabilitation or reuse of what already exists. This recognized practice for reducing the carbon footprint of the sector is therefore far from being generalized on the globe. In question, renovation requires additional skills to those necessary for new construction, which are not acquired in a uniform way depending on the country.

Only the United States encourages architects to focus primarily on the sustainability of supply chains. The United Arab Emirates are the only ones to consider that smaller and lower buildings will contribute to making urbanization more sustainable; an observation resulting from proven experience in the construction and management of high-rise buildings.

The use of new materials: a key trend to reduce the carbon impact of construction

The production of new concrete alone now accounts for approximately 7% of global CO2 emissions. PlanRadar's survey highlights enthusiasm for 7 countries around the use of recycled materials (United Kingdom, Germany, Spain, United Arab Emirates, Austria, Poland, Czech Republic). A trend that is accelerating and which makes it possible to avoid emissions linked to their initial extraction and manufacture.

While 8 countries show their interest in materials such as wood, hemp or even straw, 3 other countries (Spain, Italy and Poland) believe that the use of mycelium (mushrooms) is a trend for the future.

Italy is moreover the country most in advance of the phase, since it is the place where the experts envisage the greatest number of new materials to be used by the architects in the construction of the future. These include elements such as graphene, ecological photocatalytic paints, regenerated nylon, composite materials and carbon fiber reinforced concrete, among others. For its part, France is the only country of the 12 to cite flax as a material of the future for construction.

For its part, the United Kingdom is the only country to show an interest in bio-based concrete and France is the only one to be interested in translucent concrete.

Other countries are, conversely, rather reluctant to experiment with new materials. For example, according to Hungary, wood and CLT are the only “new” materials that will be used in the next few years. Conversely, the United Arab Emirates only show interest in “smart materials”.

Find the complete study of this first part at this link.

*Study conducted by PlanRadar in June 2022 on the trends and priorities of architects concerning the construction, habitat and offices of the future in 12 countries United States, United Kingdom, Germany, Austria, France, Spain, Czech Republic, Slovakia , Hungary, Italy, United Arab Emirates and Poland. Sources are primarily public data from experts, independent institutes, and professional and government bodies. In France, it is mainly the National Council of Architects, the Ministry of Ecological Transition and UNSFA.