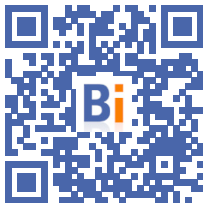 The Synergie employment barometer is the result of a partnership with Jobfeed, which lists every week all the job offers published online in the construction industry. This exhaustive data collection, covering the first four months of the year 2021, makes it possible to accurately detect changes in a sector of activity that is crucial for the French economy.

“After an annus horribilis in 2020, marked by the almost total shutdown of construction sites in the spring and a 15% drop in construction turnover, the sector is regaining dynamism and prospects. The French Building Federation is therefore forecasting a rebound in activity reaching 11% in 2021 (2). And the first trimester is encouraging. From January to March 2021, the building crafts sector recorded an increase of 9,5% against a drop of 12% in the first quarter of 2020, driven by both new construction (+ 10%) and maintenance. renovation (+ 9%) ”, emphasizes Virginie Gonzalez, manager of the construction, tertiary and medical markets at Synergie.

This renewal of form is enough to sharpen recruitment tensions in a market already penalized, before the health crisis, by a structural shortage of qualified labor, with the effect of tens of thousands of unfilled positions each year. In its latest survey, Pôle Emploi identified nearly 220.000 recruitment projects in construction for 2021, of which 63% encounter or anticipate difficulties in finding a candidate.

“In this context, temporary workers play an essential role in sourcing, attracting, training and supporting profiles that companies cannot recruit in sufficient numbers. To retain them, we have tools such as the temporary CDI, which combines the guarantees of a CDI and the flexibility of the interim ", explains Virginie Gonzalez.

Among the most sought-after jobs in temporary work for the largest number of vacancies between January and April 2021 - thus appear the essentials of the profession, which have long suffered from a lack of vocations and a lack of training courses. Electricians, masons and carpenters rise to the top three positions in the most coveted profiles, followed by construction workers, construction equipment operators and roofers. The Top 10 is completed by house painters, plumbers, drywall painters and carpenters.

"Demand is being driven upwards by the restart of new construction, by the acceleration of energy renovation works - with the support of public aid and the France Relance plan, finally by the realization of mega-projects such as the construction of the Greater Paris, preparation for the 2024 Olympic Games or even the implementation of the European Lyon-Turin link ”, recalls Virginie Gonzalez.

“Beyond masons, electricians, carpenters and other well-known professional families, the offer of temporary jobs, CDD and CDI is also very strong for trades that would perhaps not come spontaneously to the mind of a young person thinking about his future. Formworker, waterproofer, crane operator, locksmith-metalworker, tunnel boring machine, carpeting solier, heating engineer ... So many professions where the prospects for recruitment and remuneration are very favorable ”, details Virginie Gonzalez.

CDI offers are pouring in for construction executives and engineers

To meet the recurring needs of the sector, Synergie is increasing the number of tailor-made training programs, massively developing apprenticeship and professionalization contracts, widening the pathways for retraining from certain industrial sectors hard hit by the crisis (aeronautics, automotive, etc. ). Finally, the group is accelerating the feminization of professions, by relying on partnerships with benchmark associations (Force Femmes, Elles Bougent, Women from here and elsewhere ...) and pioneering tools such as the Mix & Professions forum. . 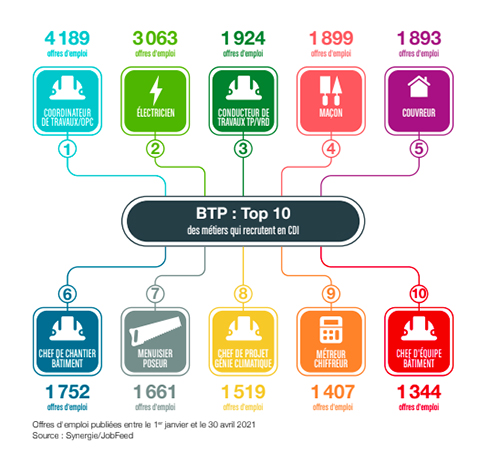 "We have also launched very innovative integration programs, such as the Parcours Dynamique Emploi which transforms the social clauses of public contracts into a real professional springboard for people in precarious situations, or the 1.000 young people in CDII scheme, in support of 16-25 years weakened by the crisis. We are also very proud to contribute to the success of HOPE, a complete offer of training and access to construction trades, dedicated to refugees, which brings together a large number of public and private partners ”, indicates Virginie Gonzalez.

In a market in the process of recovery, vacancies on permanent contracts are also on the rise. The proliferation of major infrastructure and home improvement projects has in particular stimulated the demand for management profiles. In the Top 10 of open-ended contracts, over the first 4 months of 2021, there are 5 managerial professions: works coordinator (in 1st position), works supervisor (3rd), building site manager (6th), manager climatic engineering project manager (8th) and building team leader (10th). The list of the most sought-after profiles, on permanent contracts, is supplemented by structurally difficult operational trades - electrician, mason, roofer, carpenter.