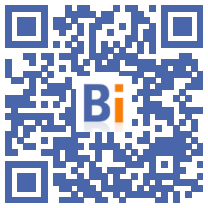 The cumulative volume of old housing transactions over the last twelve months in France (excluding Mayotte) reached 1.145.000 transactions at the end of August 2022. While 2021 was the year of growth, 2022 seems to be the year of deceleration for sales of old homes.

After 15 months of positive growth over one year, peaking at more than 1,2 million sales in September 2021, volumes began their slow decline (-3,7% in June and -5,6% in August over one year), even if they remain exceptionally high, a sign of two extraordinary years suggesting an end of the year around 1,1 million sales. In particular, notaries were able to feel a deceleration in the months of September and October accompanied by longer selling times. At the same time, the slowdown in the rise in prices has begun even though the decline is not for now. The decrease in volumes occurs before the drop in prices, but the notaries are already seeing negotiations on prices which did not exist a few months ago.

The decline attests to a year 2023 which will be objectively less remarkable in terms of volumes, but the landing should be smooth, as announced by the notaries.

Against the tide, moreover, specifically in the capital, there is a strong recovery in volumes and a drying up of stocks, likely to generate strong pressure on prices. 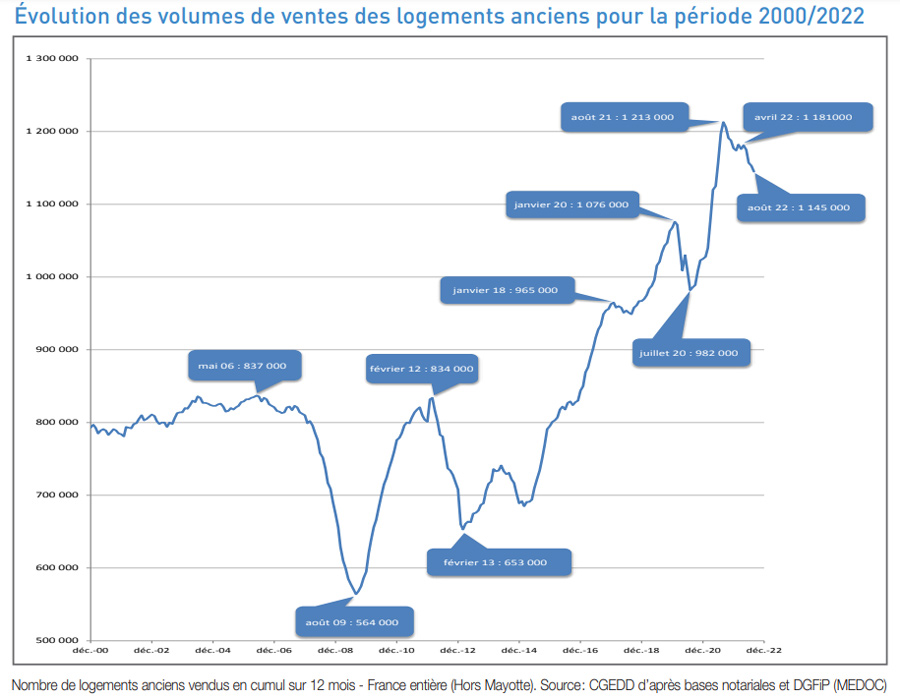 Nevertheless, the economic and geopolitical context remains dominated by uncertainties in times of instability. The real estate market is not impervious to it. In this respect, the sharp increase in rates on housing loans to 1,72% in September from 1,1% in January implies a drop in the average debt capacity which should continue and increase. On long terms, the rates are now more than 3%. While the attrition rate may have been a problem in recent months, its increase on October 1 is a breath of fresh air. But it should be noted that some buyers are afraid of looking for a quick signature in order to escape a scheduled rate hike. For several months, commercial banks' leeway has been shrinking due to this narrowing of the gap between the usury rate in force and the 10-year OAT rate. The credit supply is therefore automatically limited and transforms a necessary consumer protection tool into a credit scarcity tool, or even a credit exclusion tool, including for good profiles who do not reach the maximum debt ratio of 35%. An insufficient or overly spaced out increase in usury rates, at a different pace from the increase in bank rates, thus creates a bottleneck which paradoxically complicates access to mortgages and therefore effectively excludes some households.

Questioned during the first fortnight of October [1] , the notaries of France note that in 18,1% of the appointments concerning real estate projects, the rate of wear and tear is an issue of concretization likely to postpone the signature. They also note that in 19% of cases, this question of the wear rate can lead to compromising the realization of a sale. These results are even more marked in the major metropolitan offices. Notaries consider for 93,4% of them that the wear rate is a more present issue in their exchanges with their clients since the rate hike, and for 95,8% of them that its impact on the viability of real estate projects is more severe. 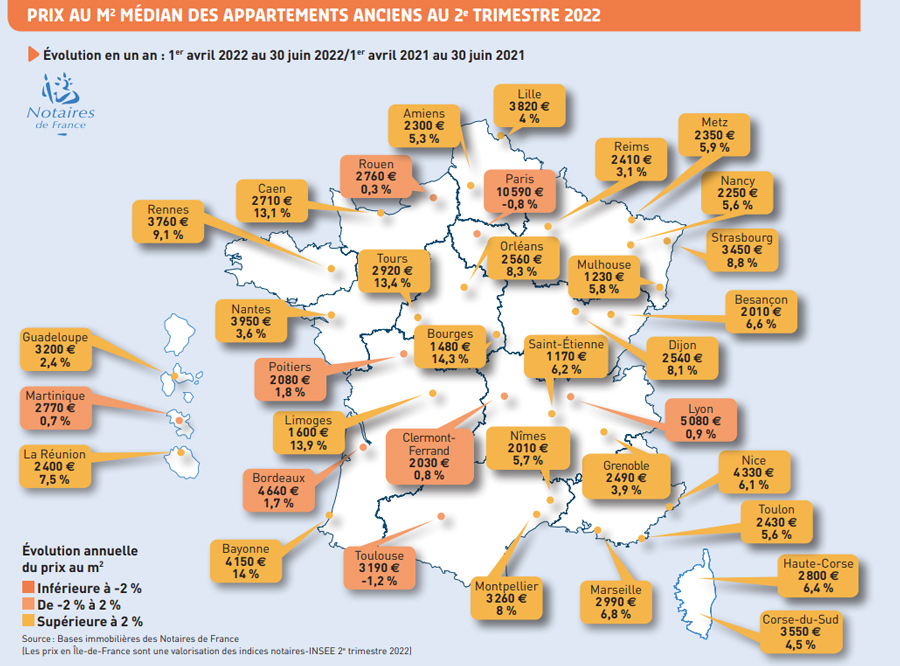 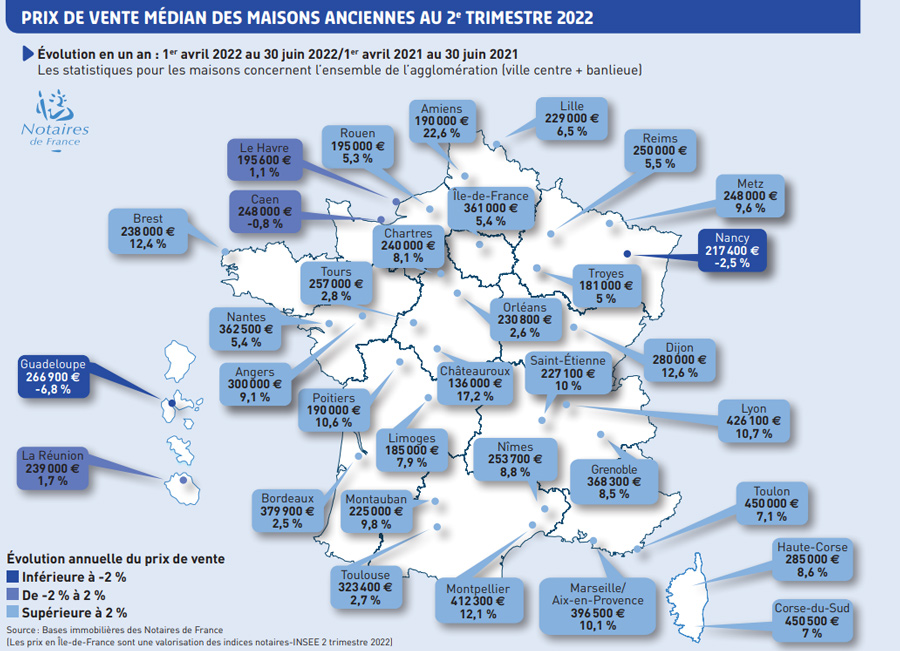 Notwithstanding this rise in rates, it should be remembered that real interest rates have never been so low since the 1970s, which remains an incentive for some buyers, particularly with regard to inflation (at 6,2. 1985% in October, a level not seen since XNUMX), so that the loan constitutes an investment. In addition, the fixed rate guarantee avoids being dependent on market fluctuations, by decorrelating the loan to the value of the property, a necessary safeguard.

The real estate market is not and will not be unrelated to the jolts and fluctuations of macro-economic parameters. But there is no need to be alarmist at this time, even if inflation and energy costs will greatly impact the purchasing power of the French in the months to come. As such, the French are increasingly attentive to the green value of goods and the quality of the DPE offered; they are increasingly influencing negotiations, particularly on the housing or rental market.

But the fundamentals of the real estate market of the old are there, which remains fueled by users, far from any real estate bubble. In uncertain times, stone remains more than ever a safe haven in an undecided and unpredictable environment.

In the 2nd quarter of 2022, the prices of existing housing decelerated slightly

In mainland France, in the 2nd quarter of 2022, the rise in prices of existing homes continued despite a slight inflection with +1,3% compared to the 1st quarter of 2022 (provisional data corrected for seasonal variations).

This slowdown should be very marked on the prices of old houses (+6,4% against +8,5% in the 2nd quarter) while those of old apartments should increase at the same rate (+4,8% against +4,5% in 2nd trimester).

According to the prices from the preliminary contracts, the price per m² of apartments in the capital should be €10620 in December 2022, at the same level as a year earlier. As has been the case for many months, price changes therefore remain very moderate, very far from the strong variations sometimes announced. From December 2020 to December 2022, prices fluctuate between €10.500 and €10.800 per m², with slight upward and then downward movements.

The rise in building costs, linked to inflation and that of raw materials, to new environmental standards and to the scarcity of land driven by the Zero Net Artificialisation (ZAN) set for 2050, not to mention the gradual loss of attractiveness of the Pinel system, leads the new home market to an economic impasse. The development of the old housing market logically follows that of the new housing market, with a certain lag. It is in fact supplied mainly by the resales of first-time buyers.

[1] - Online survey conducted by the CSN from October 12 to 14, 2022 among all notaries in France; 2295 completed questionnaires returned representing 14% of notaries in 30,8% of notarial offices.

The recent changes to the rules for calculating the DPE (3CL method, taking into account greenhouse gas emissions in the calculation of the energy label), resulting in a redistribution of housing within the energy performance scale, make difficult to interpret the changes in 2021 on the distribution and characteristics of homes sold according to the energy label [1]. The rest of this analysis will therefore focus solely on the findings for the year 2021, without comparison with a previous period. 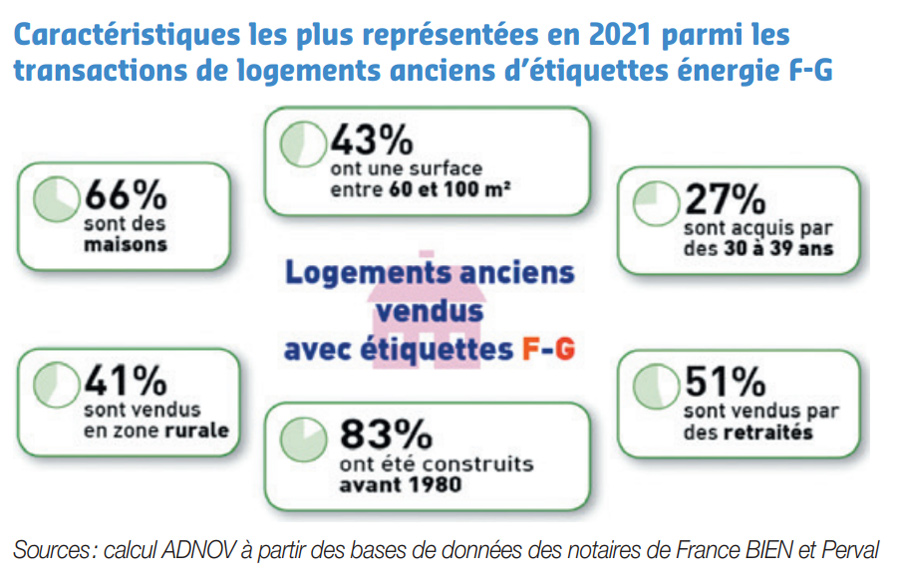 83% of homes were built before 1980 (compared to 56% of all transactions), well before the introduction of the first thermal regulations with imposed targets (early 2000). In particular, 37% were built during the post-war period from 1948 to 1969 (against 22% for all transactions). The strong and urgent demand for housing during this period had an impact on the choice and quality of the materials used.

43% of transactions have an area between 60 and 100 m². This share is equivalent to that recorded for all transactions. Nevertheless, the smallest surface areas (less than 30 m²) are over-represented among housing transactions with FG labels: 12% against 5% for all labels combined. Hot water and heating consumption, per m², is higher there, making small areas the most greedy dwellings in terms of energy load.

[1] - The information available in the real estate database of the Notaries of France does not make it possible to identify transactions with “new definition” DPEs. If the new calculation has been applicable since July 1, 2021, it can be assumed that there remains a significant share of "old definition" DPE on sales for the 2nd half of 2021.

[2] - The breakdown used is based on the INSEE notion of urban units (www.insee.fr/fr/metadonnees/definition/c1441).