Adoption and uses of BIM: Has France caught up with its European neighbors? 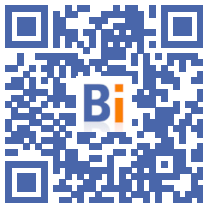 In 2013, France was at the bottom of the European ranking of countries having adopted BIM (Building information modeling). Eight years later, the latest data show that the use of BIM has accelerated sharply in France and is today included in more than 35% of real estate projects and more than 50% of construction projects, especially among the lesser builders. most important of the market.

If the trend is on the rise, this is not enough for France to reach the level of adoption of BIM of its European neighbors such as the United Kingdom (73%) and Germany (70%). This is what the survey conducted by PlanRadar in 2021 reveals.

BIM adoption: Germany on track to dethrone the UK

PlanRadar, which since 2013 has been developing a solution for digitizing construction and real estate projects in the Cloud, studied the dynamics of adoption and use of BIM in seven countries (Great Britain, Germany, Poland, France, Croatia , Austria and Russia), by compiling data from the latest national studies on the subject. While the survey shows a trend towards general adoption of this tool across the continent, some countries such as the United Kingdom and Germany stand out strongly, in particular thanks to the measures put in place by their governments for many years. many years.

By using BIM technology very early on (in the 80s) on its construction projects, the United Kingdom has established itself as a pioneer in the field. A status and a lead that it has been able to maintain over time compared to its European neighbors. Thus, according to the British National Statistics Office, 73% of companies are now familiar with BIM and use this technology in their projects. However, in 2011, only 13% of developers used BIM and 43% were unaware of it. An acceleration of its use made possible by the government, which decided to make the use of level 2016 of BIM compulsory since 2 on all projects financed by the State. These measures have proven their effectiveness but are no longer sufficient to guarantee the country's advance. Indeed, Germany now comes to compete with the United Kingdom at the top of the ranking.

Across the Rhine, as in England, around 70% of construction companies use BIM, mostly at level 2, although level 1 is the most common. If the first German BIM projects were carried out later than in England, between 2006 and 2009, the country was able to quickly catch up thanks to strong government measures. As of 2015, the use of BIM is systematic in large-scale projects with a budget of 25 million euros or more (which concerns around a third of designers and contractors in Germany) and has become mandatory since 2020 for all public contracts relating to the construction of federal infrastructures or buildings linked to infrastructures. At the same time, strong incentives are now supporting the implementation of BIM through the implementation of pilot projects and financial support for small and medium-sized businesses. 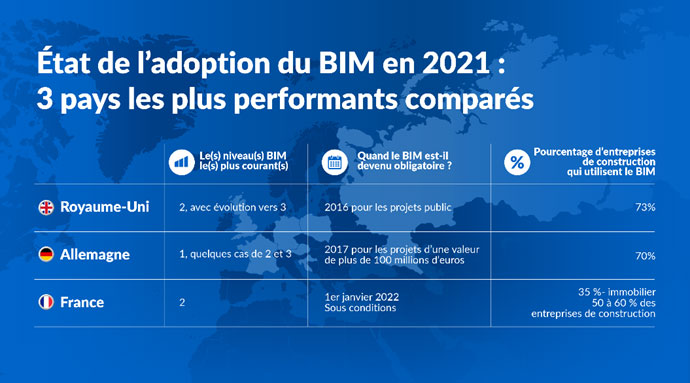 Unlike its neighbors, the use of BIM in France has not been made compulsory either on public or private construction projects. However, 35% of developers and 50% of the largest construction companies in France use BIM mainly at level 2. A result which can be explained in particular by a strong incentive commitment on the part of the State, which sees in this tool is a powerful lever for ecological transition and cost reduction. Consequently, among the players in the construction industry who are the most adept at Building Information Modeling, we find social landlords and organizations directly linked to the State. In addition, launched in 2018, the implementation of the BIM 2022 plan has also made it possible to accelerate the digital transition in construction, by encouraging participants to integrate BIM into their workflows. An encouraging situation even if the construction players continue to face many obstacles:

Matthieu Walckenaer, Country Manager France of PlanRadar, analyzes: “Although engaged in a strong dynamic since 2013, France has failed to catch up with the gap widened with Germany and England. In the field, construction players regret the heterogeneity and the financial cost of setting up such a tool, despite the time savings it could bring them in the long term. In this regard, it seems important to me that BIM equipment and dedicated training be funded by the State to boost the adoption of BIM. This with a double objective: to save time and money for companies and to accelerate productivity for the construction sector. In any case, it is this ambition that has guided us at PlanRadar since the creation of the company in 2013. ”

Find the full study this link