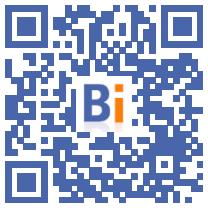 The FFB on Tuesday warned against the threat posed by the shortage and rising prices of materials on the revival of activity, after a "successful recovery" in 2021, marked by a certain acceleration in order intake.

"The recovery is there. On the other hand, because of this global imbalance on materials, the + 11% (activity) are threatened", alerted Olivier Salleron, president of the French Building Federation (FFB), during of a press conference.

The sector's activity has indeed increased, as expected, by around 11% over one year during the first half of the year, but it is still 5% below its level at the start of 2019.

The figures are thus in the green for individual and collective housing starts (+ 4,2% compared to the first quarter of 2019) and for permit authorizations (+ 1%).

However, this dynamic can only continue "if the growing supply difficulties facing construction companies are resolved quickly," the organization warned.

According to the federation, the end of the crisis is expected for the end of 2021, or even the beginning of 2022, "while we were hoping for the summer of 2021".

To limit the consequences of rising prices and shortages on the sector, the Minister of the Economy Bruno Le Maire announced last week the freezing of penalties in the event of late delivery on public markets.

An announcement deemed "totally insufficient" by the FFB, which proposes an extension of the freezing of late payment penalties on all markets (public and private) as well as full support by the State of the partial activity of employees, "as it happened last year for the Covid".

It also calls for the establishment of two tax credits in order to amortize any losses suffered in 2021 and to offset the rise in the prices of materials.

"Today, we need to cushion this shock, which is perhaps more serious than the Covid," said Mr. Salleron.

"Some projects can be not started or abandoned because the penalties will cost less than bringing the site to completion," he explained.

Companies: order books and employment are picking up, not margins 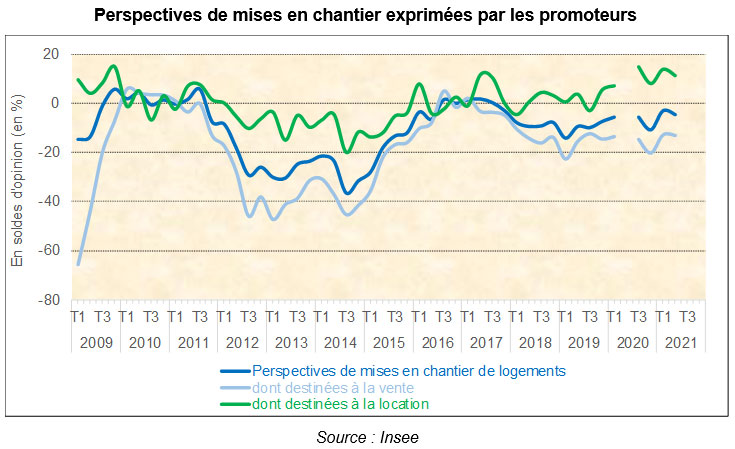 However, this revival remains undeniable in view of the order books, which reached record levels, all sizes of companies combined. And this also applies to employment, since at the end of March, the building posted 48.000 more positions than in the first quarter of 2020, including interim full-time job-equivalents, and hiring prospects remain positive. 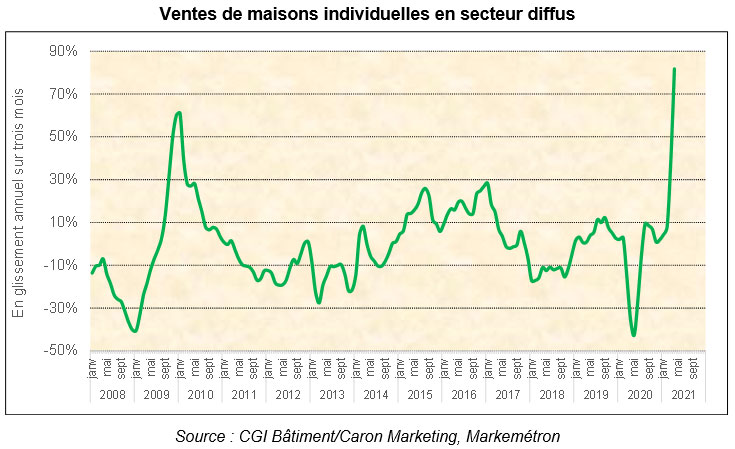 It should be noted, however, that the overall improvement in activity and employment is not clearly reflected in the profitability of companies. In fact, the Quarterly National Accounts show that after the collapse of spring 2020, the increase in operating margins ceased at the end of the third quarter of 2020 in construction, keeping them well below their pre-crisis level. This clearly distinguishes the sector from others, in particular the manufacturing industry which has more or less suffered the same constraints. 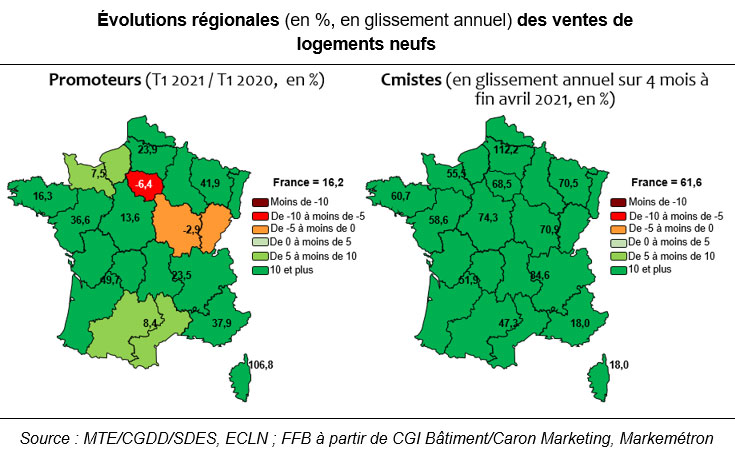 A detailed analysis of the data can explain this mainly by the upturn in employment in construction. It is probably also the beginning of the effects of the materials crisis.

Two threats: on the DFS and on the materials

These are two heavy subjects today. The first, employment, because new threats are emerging on the specific flat-rate deduction (DFS). This is a 10% reduction in the social security contribution base for employers and employees, in return for the additional costs linked to mobility from their workplace. It is estimated that it benefits 45% of workers, 10% of Etam and 5% of construction managers. 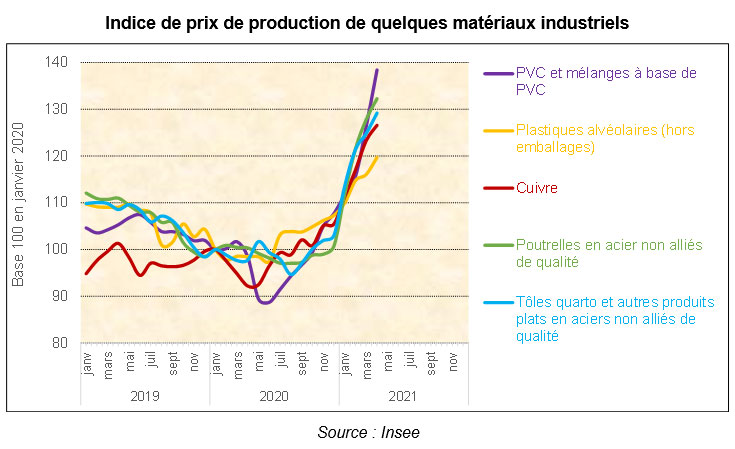 As a reminder, the government planned to remove it in 2019 and thus recover nearly a billion euros from companies and their employees, but we had succeeded in limiting the damage. It comes back to the load in a more insidious way, with the online posting on April 1 of the Official Bulletin of Social Security (Boss), which lists all the administrative doctrine in terms of social contributions. However, this Boss calls into question several sliders concerning the DFS, which thus becomes much more complex to implement, which will push many companies to give it up. The FFB urges a return to the mode of calculation ex ante. 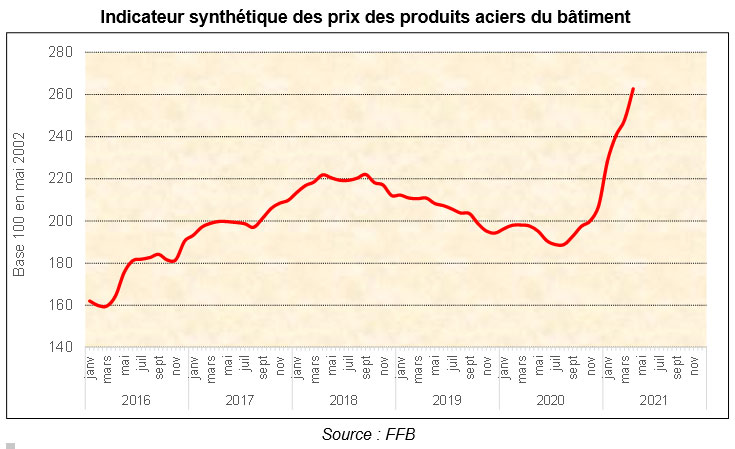 The second very heavy subject of the moment remains the shock on the materials. The FFB has already spoken widely on this subject, since the first alerts in early February. We can point out that INSEE is now confirming the price increases. In this context, some companies denounce signed contracts because the loss they would suffer by carrying out the site without price revision would prove to be greater than the penalty they incur by renouncing it. Other companies actually put employees on leave or in partial activity, due to a lack of materials to carry out the sites.

The situation is very tense, in most trades and across the country. We do not know the end of this crisis, but know that it threatens to put an end to the start of the recovery observed. Hence the call for the responsibility of all that we have disseminated very widely and the charters that we have signed with certain contractors. 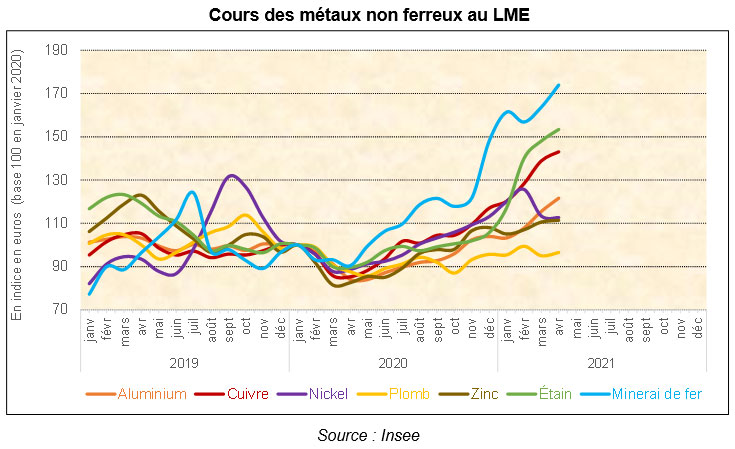 To overcome this crisis, the FFB is asking for the implementation of the theory of unforeseeability as well as the reactivation of the ordinance which had frozen late payment penalties on all markets and throughout the sector in spring 2020. It also requires stronger support from suppliers, in order to share the risk and the shock on margins. Finally, the FFB is asking the government for the possibility of immediately receiving the tax receivable generated by a carry back, a tax credit proportional to the item "purchase of materials" from companies and full support by the State of costs. partial activity in the event of a supply disruption.