Quadrilatère is redeveloping the headquarters of Crédit Immobilier de France 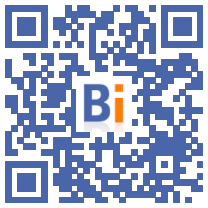 Each month, Quadrilatère looks back on its emblematic space planning and design projects. Coworking spaces, offices, shops, law firms ... So many references that embody all the expertise of the general contractor.

Quadrilatère today unveils its design work and the result of their work for the headquarters of the French banking establishment Crédit Immobilier de France, specialist in home ownership for low-income households, located at 26 rue de Madrid in the 8th arrondissement. district of Paris.

Crédit Immobilier de France wanted to improve the working conditions of its employees by offering them a place in which they feel good. 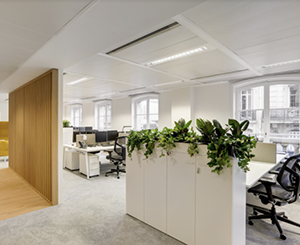 The company has thus gone from a classic, extremely partitioned organization, in individual offices or shared by 2-3 people, to more open workspaces, supplemented by more collaborative spaces: an open herbal tea room, 2 bubbles. -3 people and informal alcoves / lounges on each floor. Spaces that were once quite dark, such as the kitchen or meeting rooms, are now brighter, warmer and more welcoming.

A “Place du Village” has been created on the 2nd floor, historically dedicated to management and little frequented by employees. Now "desecrated", this space open to all has become the new heart of the head office. 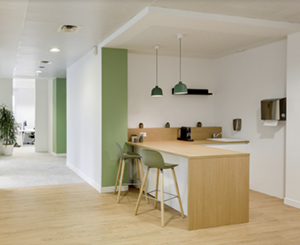 Quadrilatère has also taken into account the concerns of future users, in particular acoustics, linked to the passage in open space: by replacing the existing PVC on the floor with an absorbent carpet; by removing partitions with metal facings on which sound was reflected; or by choosing furniture consistent with uses: acoustic partitions, of encompassing shapes, covered with absorbent fabrics for informal spaces located on the floors.

These changes were made in co-design with Crédit Immobilier de France employees, during three workshops which enabled them to participate in the micro-zoning of the project; express their needs according to their working methods; to choose the atmosphere of the “Place du Village” (range of colors, furniture); to reflect on living well together and to establish new rules of life. CIF employees were also able to choose their work chair, since a selection was left for testing at the customer's premises for 1 week. 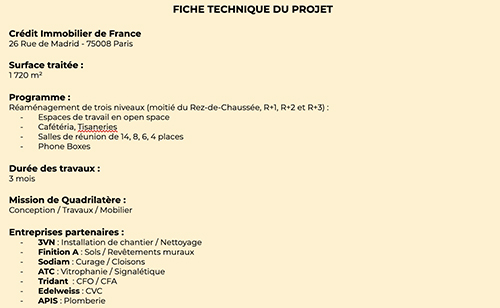