2021, an exceptional year for credit and the real estate market 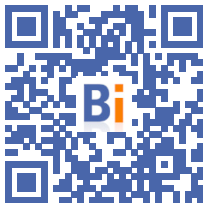 The financing environment remains favorable and the increase in the maximum debt ratio to 35% benefits all households, in particular the less well-off. Nevertheless, the obligation to respect it pushes to increase the contribution and the duration of the loan in order to access the market.

"The real estate market in 2021 is experiencing very strong dynamism. After the first confinement, borrowers have reviewed their purchase plans: it is a question of buying larger, further, or even changing their lives" analysis Pierre Chapon, president of Pretto.

Indeed, the health crisis has had a strong impact on purchasing intentions. With the rise of teleworking, part of the French have turned to medium-sized cities or made the decision to move away to become homeowners. This is the case of Parisians for example, whose research outside Ile-de-France has doubled post-containment (from 7 to 13%).

Rental investments are also concerned: more and more disinterested in the capital at high prices - and the consequent contribution - Parisian tenants are turning to the regions, their interest having jumped by 6%. Finally, the second home market has remained very dynamic, the French are still interested in this type of property. Demand is therefore 42% higher than in 2019.

"These changes observed in the real estate market have contributed to its intense activity this year. This can be seen in prices which are on the rise; but also by the number of transactions which has exceeded one million over the last 12 months. 2021 could well be another record year " declares Pierre Chapon.

A dynamic market propelled by a marked improvement in borrowing conditions

A situation favored by a surplus in bank savings of 157 billion euros since the first quarter of 2020 (Banque de France figures). All households benefit from this drop in rates, which is 25% between November 2019 and August 2021.

"Without the accommodating policies of the banks, many buyers would not have been able to acquire property. This factor has greatly contributed to the dynamism of the real estate market this year" explains Pierre Chapon, president of Pretto.

The flexibilities of the HCSF, an advantage for the less well-off households

The decision of the High Council for Financial Stability (HCSF) to determine a debt ratio of 35% maximum, against 33% in 2020, also benefited French households. Since January 2021, the proportion of cases between 33 and 35% of debt has doubled. The less well-off households experience the greatest increase: 20% of profiles under 40 € have a debt ratio of between 000% and 33%.

"Contrary to what one might think, it is the profiles with the least financial advancement who have benefited from this relaxation of the HCSF. This has had, moreover, a non-negligible impact on their borrowing capacity, in particular. 6% increase " declares Pierre Chapon. 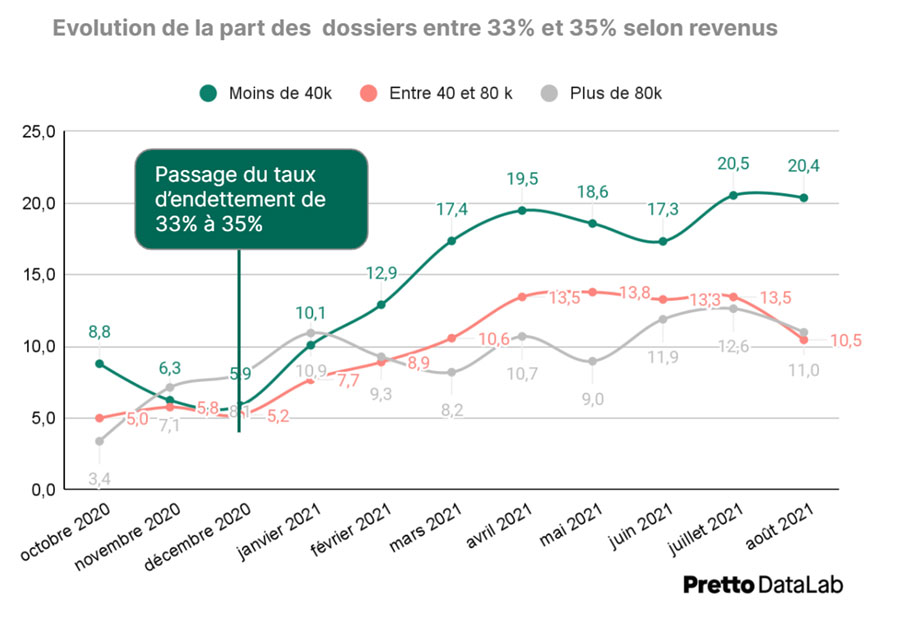 If, at the start of 2021, the recommendations of the HCSF were not yet binding, the approach of the summer and the discussions around a regulatory framework have pushed the banks to harmonize their practices (in particular under the supervision of the ACPR). Always eager to lend, they then resort more to alternative arrangements, such as the tier loan or loan smoothing in order to facilitate access to loans for certain borrowers (medical interns or holders of several loans).

In this context, the financeability measured by Pretto, on the basis of all the simulations carried out on Pretto.fr and deemed feasible, is clearly improving, with a gain of 6 points since 2020 (68 points against 74 in 2021). And, in total, more than 63 households were able to return to the real estate market.

"All these elements combined favor a record loan production in the first half of 1, higher than the same period in 2021, a record year. 2019 stands out from previous years" declares Pierre Chapon, president of Pretto. 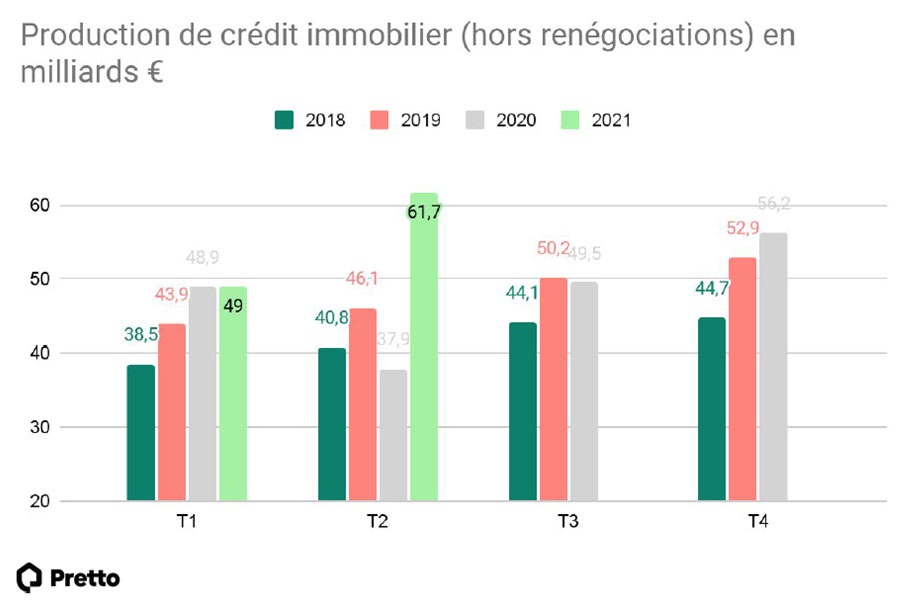 The contribution, an increasingly discriminating factor

Although the maximum debt ratio of 35% has favored the return of borrowers, buyers see their loan term and their contribution increase.

At the same time, the financingability of profiles with a contribution of less than € 5 remains lower than the general financing ability (000 against 62 points), despite a slight improvement since 75 (2020 points against 57 points). 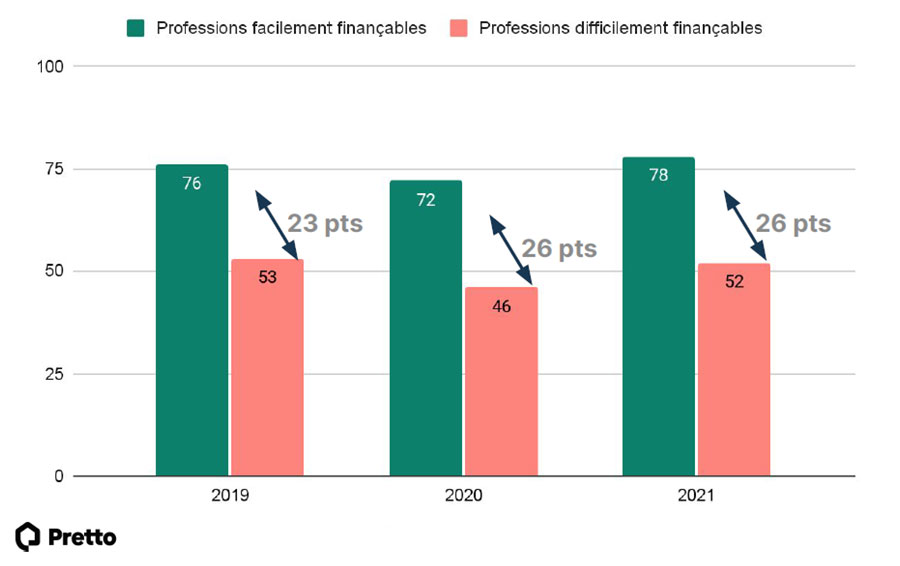 "The contribution is an element increasingly discriminating for the borrowers. The banks finance at 110% only under conditions, in particular for the young profiles, with a situation and stable incomes" Pierre Chapon analysis.

In 2020, only one in two rental investment projects could be financed. The respect of the debt ratio, but also the end of the differential calculation, impacted this type of project. The trend continues this year with funding that has not returned to 2 levels: 2019 points in November 51 against 2019 points in August 52. Conversely, the funding of main residences has gained 2021 points. 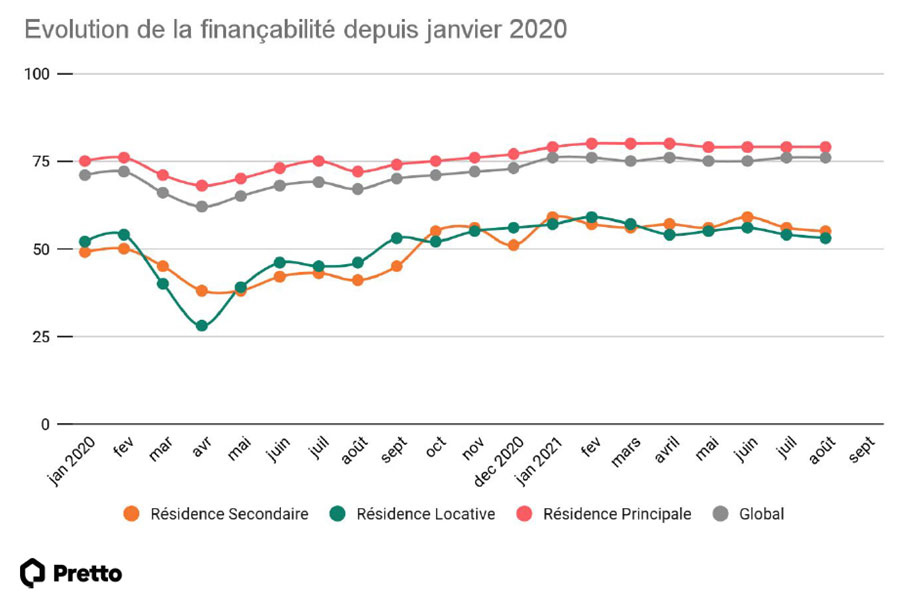 Strong differences persist between the different profiles despite the general improvement

Despite the recovery of the economy in many sectors, the distance between the profiles more easily financed (private employees, liberal professions) and difficult to finance (independent, intermittent, craftsmen) is maintained. The financing gap in 2021 being identical to that of 2020 (26 points), reflecting a similar improvement for the two categories (+6 points on the financing index).

"Short-time working can constitute a real obstacle to access to credit, in particular if savings are low or employment prospects compromised. Banks look at cases on a case-by-case basis for profiles working in the most vulnerable sectors. by the crisis " analysis Pierre Chapon, president of Pretto.

In many respects, 2021 appears to be an exceptional year after a year 2020 disrupted by a health crisis and a tightening of the granting conditions.

For Pierre Chapon, "The year is certainly conducive to buying real estate. The only point of attention concerns economic activity, and the gradual end of state aid, which could impact employment for certain households, and therefore their access. on credit ".