10th French Rope Access Championships in Lyon, May 19 and 20 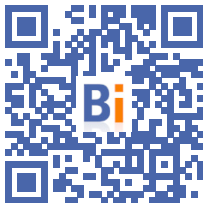 With more than a hundred participants and around twenty companies, the French Rope Access Championship is the major gathering of the profession which brings together a wide variety of activities (renovation of buildings, maintenance of industrial sites, restoration of historical monuments , work on engineering structures, protection against natural hazards and rockslides).

Ivan Muscat has been a rope access technician and climber for over 20 years. And trainer!

Born in 1979, father of a 5-year-old boy, Ivan Lives in Millau. Independent, he is a rope access technician (training, in jury and on site) as well as a climbing, canyoning and via-ferrata instructor in season. His small business is called Accro Nature.

He cut his teeth on several types of sites: public works, urban and industrial. Having the Level 2 Professional Qualification Certification and the OTC (Technician in Organization of Work on Ropes) as well as the State Climbing Certificate, Ivan has been heading towards rope access training for 7 years.

“However, I was not destined for vertical jobs. It was stronger than me. My native region is Brittany, I had to move to countries a little more endowed with pebbles, rocks and cliffs of all kinds - even if Brittany has them too! I have been taking part in the French Rope Access Championships since 2014. They combine technique and physical power and I love the atmosphere! This is the only meeting where the whole profession meets!
Having good results, always on the podiums individually and as a team, I was invited to participate in the Petzl RopeTrip in Salt Lake City in 2016 (World Championships). With Antoine Quidoz and Yohan Garcia, we won the trophy - magnificent Texan bovine horns! - against the defending champions, the Russian team.
I will obviously be present on this tenth edition. 2nd in the individual ranking during the last two editions, I really want to be French Champion this year! »

Work on a historic monument with the company Adrenaline and rope access technician Jean-Baptiste Bunlet, based in Bordeaux 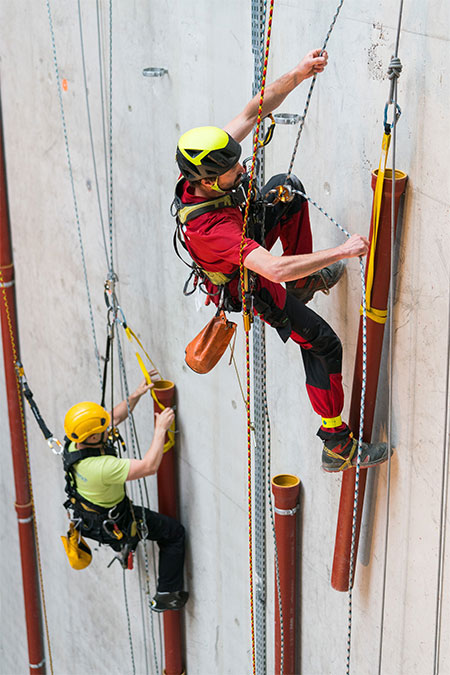 The Flèche Saint-Michel (Bordeaux) with its 114 meters in height, is the second highest bell tower in France.

Listed as a UNESCO World Heritage Site, it has the particularity of being separated from the main building of the Basilica of the same name.

La Flèche has been regularly inspected (for more than 14 years) by the Adrenaline teams, as it shows significant deterioration, observed over time. Major works will be carried out in a few months. For this Adrénaline has already had to secure the monument and check that the security is in place. Jean-Baptiste Bunlet and 4 other rope access technicians therefore carried out, during March at more than 100 meters above the ground, a veritable consolidation belt. Their work also consists of checking the accelerometers which measure the movements of the boom as well as the crack meters which measure to the 100th of a mm of the size of the cracks.

Adrenaline presents a team of 3 rope access technicians to participate in the French team championship with two technicians from the Brittany agency. The third is Jean-Baptiste (29 years old) who will participate for the first time in the French championship, proud to represent his company and happy to discover the atmosphere and the stress of the competition. At 29, he has been a rope access technician for 6 years after a CAP and professional baccalaureate in electrical engineering. “This job is fascinating, it is very varied, at height, and I really like that. I mainly work on historical monuments or urban buildings, and in industry as well as in silos.” 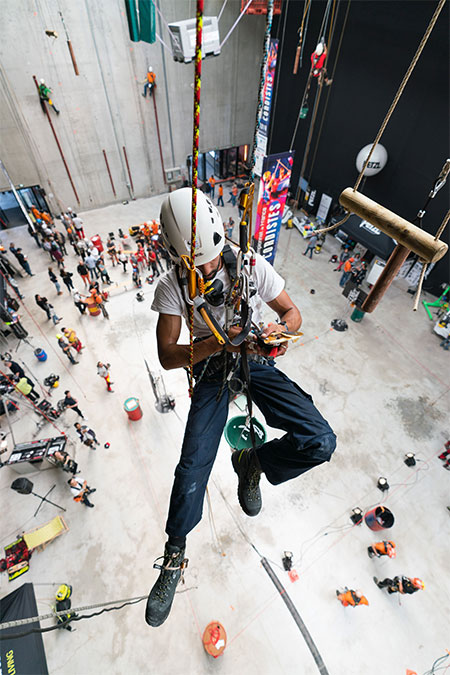 The cliffs of Les Écouges in the Vercors are currently the scene of impressive work since 2016. Every autumn and every spring the tourist route is closed to allow around fifteen rope access technicians to work on its safety and ensure access for the winter seasons. winter and summer: Rehabilitation, laying of fences above the tourist route.

The RD 35 or route des Écouges is a legacy of the XNUMXth century which serves the small village of Rencurel, the ski area of ​​Coulmes and the natural site of Écouges. It is also the gateway to the Gorges de la Bourne and its major tourist spots such as Pont-en-Royans or the caves of Choranche.

Born in 1976, François, French team champion for the last two editions, hopes to win a third team title with Hydrokarst!

"The fundamentals of rope access work & Preserving your health", in partnership with the OPPBTP

Free admission - open to the public